Sell me some Imperial Glass!

As many old newspapers and journals are digitised and put online, they provide an amazing insight into how Carnival Glass was originally promoted, marketed and sold to the public, either directly, or by other means like mail order and wholesalers.

Here is a series of contemporary adverts for Imperial Carnival Glass from 1910-1911, by which time, Carnival was clearly well established in production. It was being advertised by Cox & Lafferty, a New York Representative, but the selections were being made up and despatched directly from Imperial's factory.
​
​Click on ANY IMAGE to see the detail in a full sized version of the ad.
The December 15, 1910 ad suggested that all the items were in Azur, but the actual product list shows that only three of them were L (Azur) and the other three were M (Rubigold/marigold). The ad is careful - nowhere does it say that Azur means purple, only that the selection is all "lustrous, iridescent" - so the customer may not be too surprised to receive some marigold pieces - the headline implied that the customer was to receive all items in Azur, but the small print said otherwise!

Note the comment about "RED IRIDESCENT" in the March 16, 1911 ad below. Imperial actually made very little Classic red Carnival (it is a colour they used when they re-introduced Contemporary Carnival from the 1960s on). The use of "red" here is consistent with the way Imperial advertised their Rubigold/marigold - and, lo and behold, all the product/colour codes in the ad are M (meaning Rubigold/marigold - definitely not red.
​
Here are some examples of the pieces the buyers might have received!
All Cox & Lafferty images originally from the New York Public Library, digitised by Google.
Back to Sell it to me! homepage 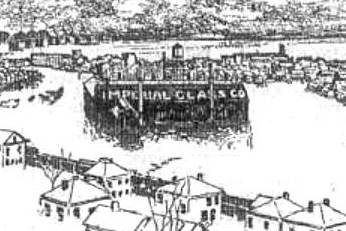 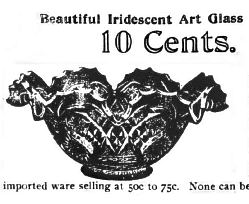 12 Days of Christmas plates, 1970-71
Copyright © 2023 by G&S Thistlewood and the individual authors and contributors where named. Protected under all applicable international laws and all rights are reserved. No image, text, or any part thereof may be copied, shared or transmitted to others without permission from the Copyright holders. Information herein may not be posted or made available, in whole or in part, on any website, social media site, FTP site, electronic bulletin board, newsgroup, or their equivalent.