Read All About It!

The Imperial Glass factory at Bellaire, was inundated by the floods and much damage was caused. The ad below, left, from the Brooklyn Daily Eagle, June 1, 1913, shows the factory surrounded by floodwaters. The text states that 28,000 barrels of glassware were submerged, damaging the packing but not the glass itself. Consequently, the ad offers a wide selection of Imperial glass at half price. Although iridised glass isn’t mentioned specifically, it’s almost certain that it would have been in the flood damaged stocks, as 1913 was a prime time for Imperial's production of Carnival. Who knows.... maybe a Zippered Heart set like the one below right, emerged from one of the salvaged barrels (photo courtesy of Seek Auctions)!

In 1926, sandwiched between the overcoats and the corsets for “stout figures” we find a special display of Jacobean Glass in Thornton’s Arcade, Leeds in Yorkshire.  The glass was made by the Josef Inwald factory in the former Czechoslovakia – and the pattern (variously named “Lord”, “Milord” and “Jacobean”) was first made by them in 1921. As well as clear glass, Jacobean was also made in Carnival, as the catalogue extract shows.

The pitcher and bowls shown in the ad are known in Carnival, as are vases, tumblers, decanters and a whole range of dresser set pieces. 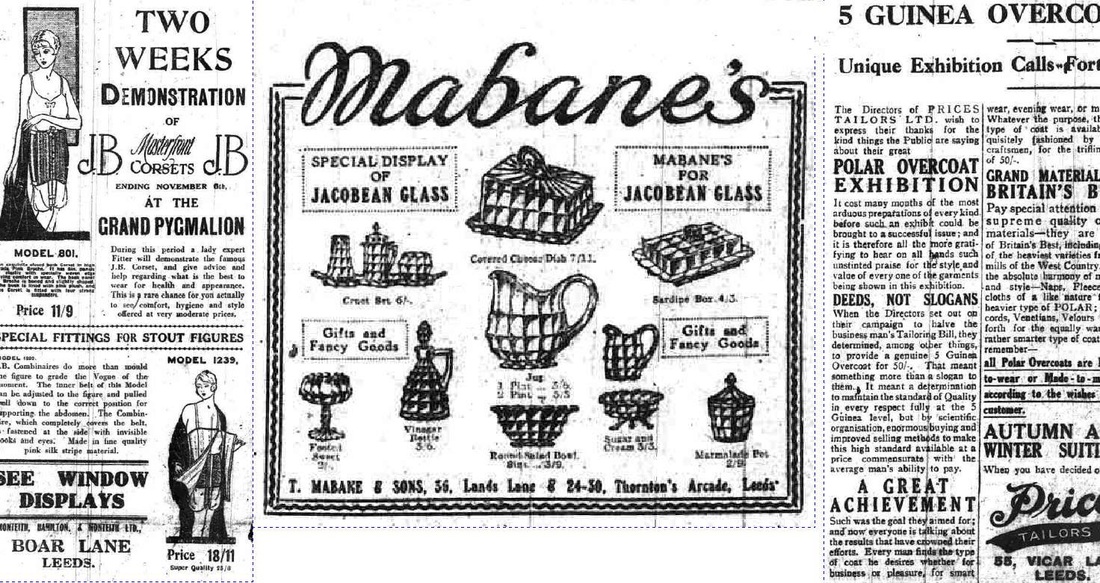 Read more "Read All About It!"
Copyright © 2023 by G&S Thistlewood and the individual authors and contributors where named. Protected under all applicable international laws and all rights are reserved. No image, text, or any part thereof may be copied, shared or transmitted to others without permission from the Copyright holders. Information herein may not be posted or made available, in whole or in part, on any website, social media site, FTP site, electronic bulletin board, newsgroup, or their equivalent.