Moulds are used to create the basic shape of the item being pressed, and they also create the designs that are seen on the surface of the glass itself.

Touch the glass and you can feel the pattern … up, down and around, as you follow a flower or a geometric design. It’s not cut, etched or painted; the pattern is part of the physical profile of the glass itself. The pattern may stand out from the surface of the glass item (referred to as "cameo"), or be sunk into the surface (called "intaglio"), or sometimes a combination of the two styles.

How was it made?

All Carnival Glass is made using moulds, which in most cases would be metal, although some makers also used wooden moulds.

Molten glass was dropped into a mould, and a plunger was pulled down into it, forcing the hot glass into the shape of the mould. This was done on a piece of mechanical apparatus called a side-lever press, and/or assisted by air pressure (blow moulded). The mould created the exterior pattern and the plunger created the pattern on the inside surface.

Once pressed, the glass was returned to be reheated in what is called the "glory hole", which made it malleable so that it could be hand-shaped (if required). The glass also had to be reheated before being sprayed (to create the iridescence) whilst still hot. The spraying may be repeated more than once.

Finally, the finished item would be moved to a lehr where it was allowed to cool down slowly (which reduces the natural stresses in the glass as it cooled).

Moulded patterns vary from the simple, yet very effective, to the extremely complex and detailed.

Moulds and plungers are complicated (and expensive) pieces of technical and mechanical wizardry. They are the essential part of pressed glass (and by definition, Carnival Glass), and the master craftsmen who made them are the unsung heroes of the pressed glassmaking world! We know so much about the glassmaking companies, like Fenton, Imperial, Sowerby etc., but we know relatively little about who made the moulds!

It is fascinating to study the moulds and plungers and to appreciate the skill that went into making them. Amazingly, the pattern on the mould had to be cut as a sort of "reverse mirror image" of how it was intended to appear on the finished piece of glass.  Sometimes the design would be cut into the metal so that the pattern comes out in cameo (raised up off the surface) on the glass. Other times, the design would be left proud of the surface of the mould, and the areas around the main pattern are cut away on the metal, which results in the pattern on the finished glass being intaglio (incised into the glass), often described as "near cut". Sometimes, moulds would be a combination of cameo and intaglio!

We had the amazing experience of working with some very talented craftsmen (and women) at Fenton when Glen was asked to work with them to create not one, but two original moulded patterns for a Carnival club commemorative. We document the whole fascinating story of modern-day mould making at Fenton.

So the next time you look at a piece of glass and marvel at its intricate and lovely design - spare a moment to thank the mould makers too.

What happened to all the old Carnival moulds?

It's extremely complicated! Moulds were one of a glassmakers most valuable assets, and as glass companies closed down or merged, the moulds tended to be moved on to other glassmakers.

Northwood: we have no idea what happened to the moulds used to produce Carnival Glass at Northwood's Wheeling factory. Given the circumstances of the closure of the business - see Harry Northwood: Triumph and Tragedy - it's quite likely that they were sold for scrap to pay off the debts of the business. Several of the wonderful Northwood patterns such as Hearts & Flowers, Good Luck, Fine Cut and Roses, Poppy pickle and so on, were re-made later in Contemporary Carnival by Fenton, but using new moulds with patterns that were "inspired" by, but not identical to the originals. Fine Cut and Roses, for example, was re-done with grapes instead of roses! Some of the iconic Northwood designs have been faked: Good Luck, Grape and Cable, Peacocks, and Memphis have all been copied and they continue to mislead some people. These items are not from the old, original Northwood moulds. More recently, the New Northwood Art Glass Co. found and used one of Harry Northwood's old moulds for the Dolphin card receiver. It was not originally made in Carnival and was one of the old Indiana, PA moulds (see below).

Dugan-Diamond: some of the early Northwood moulds that were used by Northwood at the Indiana, PA factory (but crucially not for making Carnival) were subsequently used by Dugan when Tom Dugan took over that factory. But although Dugan made some items in Carnival, such as the Nautilus, these hadn't previously been made by Harry Northwood in Carnival, so no confusion should arise. Many of the Dugan-Diamond moulds were probably lost in their factory fire in around 1931, although a number of them were discovered by Si Wright (of L G Wright Glass) and were subsequently used to make Contemporary Carnival reproductions, such as Maple Leaf.

Fenton: Fenton acquired many moulds from other glass companies* and used them, as well as their own Classic Carnival moulds, to make Contemporary Carnival Glass (or as inspiration for new patterns). See "Fenton Old and New". Several other Contemporary Fenton patterns are indexed from our Fenton Homepage. There is also a fake Stag and Holly. The Fenton factory closed in 2011: subsequently the moulds were mostly acquired by the Fenton Gift Shop although several moulds were also bought privately. In 2017, the Marietta Times reported on the intended disposal of the moulds: "Fenton explained that throughout the lifespan of the plant and the purchase of other glass companies’ moulds over the century, a collection was amassed between 9,000 and 10,000 strong of cast iron moulds for everything from old bus lights to lamp shades and wine stoppers. “We still haven’t decided if those will be placed up for auction yet,” he said. “The wood patterns and the intricate work that went into making those ran some moulds around $8,000 a piece.” The story is still developing.

* When Fenton closed, their mould inventory showed that many had been acquired over time from Imperial, Indiana, McKee, Pilgrim, L G Wright and Verlys.

Other moulds: Imperial moulds were used by the various entities post-Imperial (such as Lennox and ALIG) and then later sold off (Fenton bought some of them). Westmoreland moulds went to various places such as Summit Art Glass and Rosso. Current producers, such as Mosser, do use some old moulds, or updated versions of them). When L G Wright closed, their moulds were all sold off in a major auction some years ago, some of them went to Fenton, some went overseas, and various other places.

Keeping track of which moulds went where is a major problem!

Want to read and see more about the art of mould making? Click on any image below. 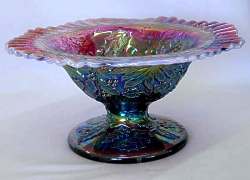 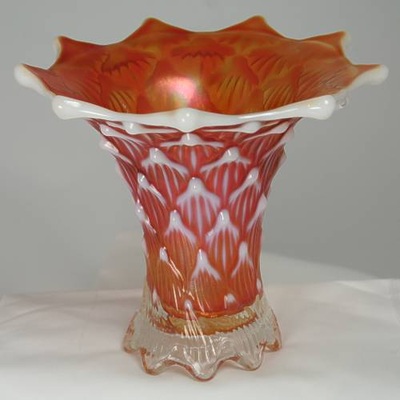 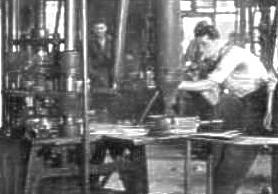 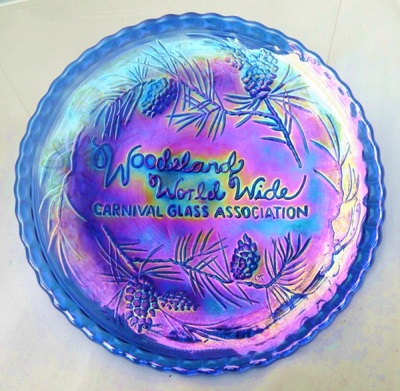 We made a mould with Fenton
Copyright © 2023 by G&S Thistlewood and the individual authors and contributors where named. Protected under all applicable international laws and all rights are reserved. No image, text, or any part thereof may be copied, shared or transmitted to others without permission from the Copyright holders. Information herein may not be posted or made available, in whole or in part, on any website, social media site, FTP site, electronic bulletin board, newsgroup, or their equivalent.