Northwood Fakes and how to spot them

All these Northwood Carnival Glass patterns have been faked, but with a bit of knowledge, they are easily spotted.: Good Luck; Peacocks; Grape and Cable bowls and Grape and Cable hatpin holders; Memphis covered butters.

It is likely that the fakes all come from the same unknown source in the Far East. They are pretty good copies of the original patterns and have deceived many a new collector. It was reported as early as the 1980s that a shop in one of the London antique markets had fake Peacocks bowls stacked up dozens high! These early examples were thick and heavy with a dull finish that soon oxidized, but more recent examples are lighter, thinner and brasher looking.

The exterior pattern may be a copy of Northwood's Basketweave or Ribs. Some examples can be spotted as they have iridescence on the base, others have a solid disk of glass where the indented collar base should be. Those with the solid disk could be termed the second generation of fakes and often have an over-shiny iridescence compared to the dull, thick finish on the early examples. A new generation of fakes has also been reported, better than the earlier fakes. Whilst the earlier examples were heavy, the latest ones are lighter, more like the original Northwood items in weight, and a rather poor attempt at a pie-crust finish may be evident.

Fake Grape and Cable bowls - how to spot them?

- the grapes on the reproduced items are all about the same size whereas on the original pieces the grapes appear to gradually get smaller towards the center of the bowl.

- many examples bear a large looking N mark, which is cruder in appearance than the genuine Northwood N. The fake N is neither underlined nor in a circle.

The best advice to new collectors is to study examples you know to be genuine (experienced collectors are usually willing to help) - they are significantly different from the fakes. To an experienced eye, the fake is easy to spot. Colors so far reported for the fake bowls are marigold, blue and green.

Ray and Jean Rogers in Australia have studied their own example of the Grape & Cable fake. Their observations are below - pictures all courtesy of Ray Rodgers. 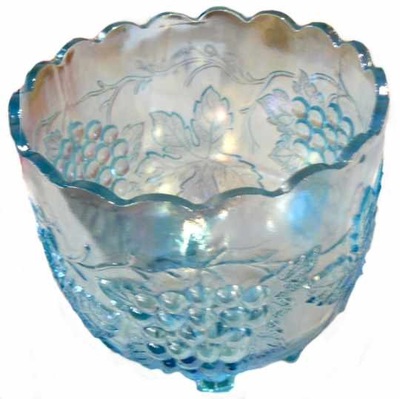 Fake Carnival Glass
Copyright © 2009-2021 by G&S Thistlewood and individual authors and contributors where named. Protected under all applicable international laws and all rights are reserved. No image, text, or any part thereof may be copied, shared or transmitted to others without permission from the Copyright holders. Information herein may not be posted or made available, in whole or in part, on any website, social media site, FTP site, electronic bulletin board, newsgroup, or their equivalent.