​The Enduring Butterfly and Berry

Copyright Glen and Stephen Thistlewood, ​March 2022
Fenton's Butterfly and Berry pattern had one of the longest Carnival Glass production runs that we know of - being made initially by Fenton in Classic Carnival for almost 30 years, then again by Fenton in their Revival era Carnival, and also being reproduced by an unknown maker in Korea!

Could Fenton have expected such an enduring and popular appeal when they introduced their Butterfly and Berry pattern in around 1910-11 as their pattern number "Eleven Twenty-Four"?
Left to right: a covered butter in blue (Classic Carnival), a marigold berry set, Seeck Auctions (Classic),
and a red fernery (Revival era from 1984, a HOACGA club commemorative item).
​Classic Carnival Production

You will find Classic Butterfly and Berry in a variety of shapes: table sets (covered butter, covered sugar, creamer and spooner), water sets (pitcher and tumbler), hatpin holder, differently shaped large and small footed bowls, and even a swung vase. The pattern was used on its own as an exterior pattern, as both an exterior and interior pattern combination, and as an exterior pattern paired up with other interior patterns (Hearts and Trees, Fantail, and Panther).
​
Above, on the right, you can clearly see the different shapes that were created from the 3-footed master berry mould - the top one in green has a tightly crimped top edge; the one in the middle, in amethyst has been cupped in to create a fernery shape; the bottom one, in amethyst with a yellow iridescence has been flattened out into what is called a centrepiece shape.
Catalogues and Ads, 1911 to 1925

​Shown below is an ad from the 1911 Butler Brothers Mid-Spring wholesale catalogue (*). As far as we know, it was the first time that Butterfly and Berry items appeared there. In the same year, tumblers also appeared in the Lee Manufacturing Company Mail Order catalogue (below, right).
The next year, 1912, Butterfly and Berry appears in the Butler Brothers April catalogue in a Fenton assortment - the C1617 "MONARCH" Assortment. We also see the exterior Butterfly and Berry pattern matched with a different interior pattern, which is Fantail, in the C2168 "GIANT" Fruit Bowl Assortment.
The C2413 "AURORA" Assortment continued to be offered from 1914 to 1918 (with some small changes, mainly price-related). Then, from 1918 right through to 1924, it was replaced with the C2414 "NEW AURORA" Assortment. Although fewer pieces were illustrated in the "New Aurora", the items sold in the actual assortment seems to be virtually the same as the "old" Aurora. Alongside the "New Aurora", Butler Brothers offered the C2402 "MAGNET" Assortment from 1917 to 1923.
​Into the mid and late 1920s, the USA consumer appeal for Carnival Glass was on the decline, and with it the US glassmakers turned their production to other types of glassware. Nevertheless, Butterfly and Berry seemed to retain its attraction, and we see various ads for it, with water sets, table sets and berry sets being the main focus.
Whilst Butterfly and Berry has had its day in Classic Carnival Glass, it was by no means the end of this extremely popular and versatile pattern. When Fenton decided to make Carnival Glass in the Revival Era, it is probably not surprising that one of the patterns they turned to was Butterfly and Berry.
Butterfly and Berry in Revival Carnival

In the 1970s, Fenton started making Carnival Glass again, often using their original moulds and also a massive range of entirely new innovative patterns and shapes. Their Revival Carnival production was clearly marked, as we cover extensively in "Fenton Old and New".
​
Butterfly and Berry Fakes

Perhaps as a sad reflection on the enduring popularity of the Butterfly and Berry pattern, fake versions of the large 3-footed bowl began to appear, being first reported in the 1980s. They were (and possibly still are) being made in Korea.
They are made from a new mould (copying the Fenton original), and the interior pattern on the fake is more concentrated in the centre of the bowls. They are known in blue, light pink, amethyst/black amethyst/purple, and a milky white opalescent-looking colour, advertised as "White Opal Iridescence", which is not to be confused with the fairly rare Classic Carnival pieces in white.
Two of the colours of the Korean made fake Butterfly and Berry 3-footed bowls.
​Left "White Opal Iridescence", courtesy of Hb Lammers and right, black amethyst, courtesy of Burn Auctions.
Further reading 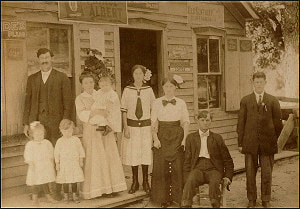 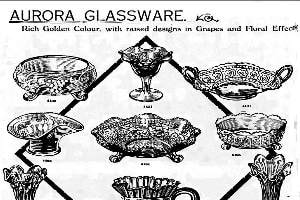 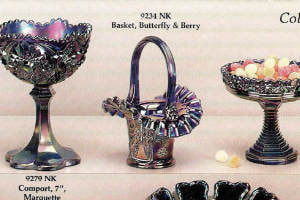 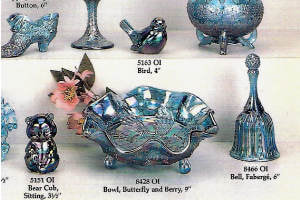 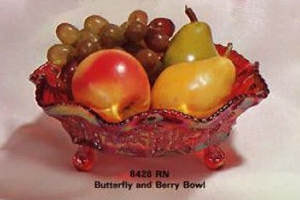 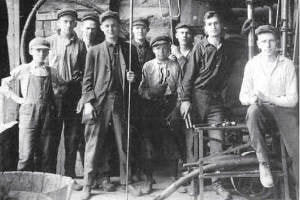 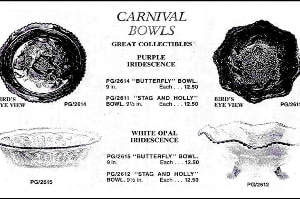 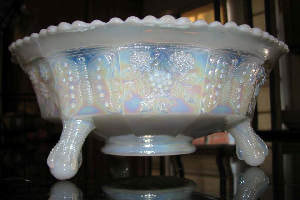 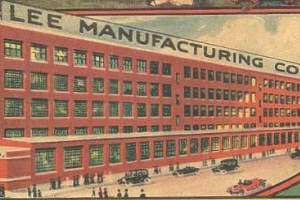 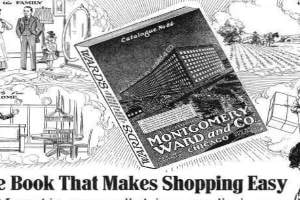 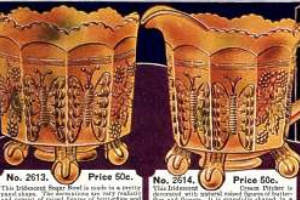 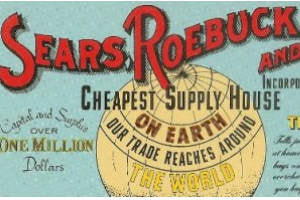 Sears Roebuck Mail Order
* Extracts from Butler Brothers catalogues are thanks to San Diego County and Southern California Carnival Glass Clubs.
Copyright © 2023 by G&S Thistlewood and the individual authors and contributors where named. Protected under all applicable international laws and all rights are reserved. No image, text, or any part thereof may be copied, shared or transmitted to others without permission from the Copyright holders. Information herein may not be posted or made available, in whole or in part, on any website, social media site, FTP site, electronic bulletin board, newsgroup, or their equivalent.