The explanatory text in the King Manufacturing Co. ad above is fascinating: “This beautiful coloring is the lost art of the Egyptians and has just been recently rediscovered”. As we explained above, the Ancient Egyptians did not purposely iridise their glass, so what King was alluding to was undoubtedly the introduction in the early 1900s of iridescent pressed glass (that is, Carnival Glass). In the King Manufacturing ad above, the full berry set was offered free to their sales agents, for “selling $3.00 worth” of goods from the catalog.

In the same King Manufacturing Catalog from around 1909, we see another Wild Strawberry berry set (below, left), but this time it is offered as part of a sales premium plan (no. 740). In the plan, the set was offered alongside baking powder, safety pins, washing compound and talcum powder, for just a dollar! Notice how the depiction of the Wild Strawberry pattern is quite different on the two ads. On the first, it’s simplified and rather basic – but the second one is much more realistic and fulsome in its beautiful portrayal of the lovely Northwood design.
So, what do we know about the King Manufacturing Company?

Their address was 1421 Olive Street, St. Louis, Missouri, which we believe (through studying the street map) was located about ¾ of a mile due west from today’s St. Louis Arch on the Mississippi River – and is currently the location of a parking lot adjacent to the St. Louis Public Central Library. Local residents can possibly advise if we are correct about this.

Despite advertising themselves as a “Manufacturing” company, it is unlikely they actually manufactured any goods. They operated a premium plan business, using agents to sell the goods in their catalogues. The goods would be sent to their agents by free shipping (as Kings said “We bear the expense of freight charges”) and the payments would be collected and submitted to the parent company. Agents would be compensated by receiving free goods (premiums) and/or a cash commission. Note in the illustration of the King Manufacturing building above, “Office” and “Shipping Dept.” are prominent. Much of the space inside the premises would also have been used for goods storage.

In a previous issue of our NetworK ezine we were delighted to share another ad from this intriguing company, courtesy of Joan Doty and the late Don Moore. On offer was a Northwood Tree Trunk vase with a very surprising herbal medicine. You can read it here, from February 2021: NetworK Issue #69

You can also read more about another prominent Mail Order and Premium marketing company, Lee Manufacturing here: Carnival Glass at a Premium​
In the 1970s, ads appeared in the A.A. Importing Company’s Catalogs for items that we feel were almost certainly the marigold and blue Sowerby Covered Hens. The “Orange Carnival” Hen shown below on the left appeared in 1971; it was surely what Sowerby called their “Sunglow” marigold Carnival.
​
​Then, in 1976, a “highly iridescent purple” Hen appeared - below, right. It says that the Hen was purple, but it was almost certainly blue base glass with much purple in the iridescence. This was Sowerby’s “Rainbo” iridescence which had deep blue and purple hues, as seen in the blue Covered Hen image at the top of this article.
Despite the poor image quality, it’s easy to see that these Hens are the same shape and detail as the Sowerby Covered Hen (despite the missing part of the “iridescent purple” hen’s head, which appears to be caused by lax “cut and paste” graphics from 40 plus years ago).​
​
​A.A. Importing is also known for importing the controversial Stag & Holly and Butterfly & Berry Carnival bowls. They were made in Korea, and the first reported sightings were in the early 1980s. One of the original ads for them is show below. 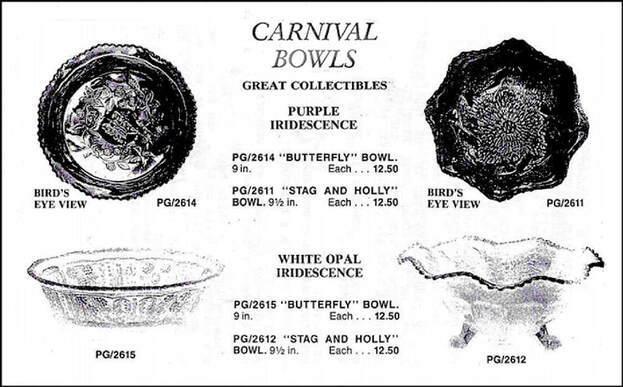 ​You can read all about these here: Stag and Holly Fakes
A Discovery in Brazil
Photos courtesy of Thiago Zanette.
We were recently contacted by Brazilian Carnival Glass researcher, Claudio Deviekis, with exciting news about a fresh discovery. Claudio’s friend, Carnival collector Thiago Zanette, had found three delightful handled dishes that had not been seen before (see Thiago’s photos right, and below).
​Claudio was able to locate the exact item in the Esberard catalogue – you can see it on the left side, third item down – number 3447. It’s a small item of tableware, possibly for snacks or bonbons, or as Claudio suggests, for discarded fruit sections, peel, seeds etc., that would be served after the main meal.

​This Esberard pattern has a familiar feel to it to us, which led us to wonder if perhaps it was inspired by the United States Glass popular design “Manhattan” (which was introduced c.1902).​ ​
We are celebrating! Five Years of NetworK on Facebook and almost 12,000 members!

On October 24th., 2016 we began our Carnival Glass NetworK Facebook Group. That was five years ago, and now we have almost twelve thousand people from all around the world. People who who enjoy looking at, learning about and sharing their Carnival Glass. We have members in every continent, and every day is a journey of learning even more about our glass. Hats off to all our truly wonderful members – you are the very best.

If you are not a member of our Facebook Group, why not join us? Here is the application link: NetworK Sign-Up
If you have missed any of the previous issues of NetworK and NetworK Specials, they are all here: Back Issues.
​Privacy and the use of your information: we only use your name and email address to send you your FREE Carnival Glass NetworK ezine. We will not share your name or email address with anyone else, or use it for any other purpose. You can change your mind about receiving your NetworK ezine at any time by clicking the unsubscribe link at the foot of every issue, or by emailing us at s.g.thistlewood@btinternet.com
​Join us on Facebook
​
​We would love you to come and join in the fun, and we invite you and your friends to join us all on NetworK's fast growing and very active Facebook Group!
Copyright © 2023 by G&S Thistlewood and the individual authors and contributors where named. Protected under all applicable international laws and all rights are reserved. No image, text, or any part thereof may be copied, shared or transmitted to others without permission from the Copyright holders. Information herein may not be posted or made available, in whole or in part, on any website, social media site, FTP site, electronic bulletin board, newsgroup, or their equivalent.