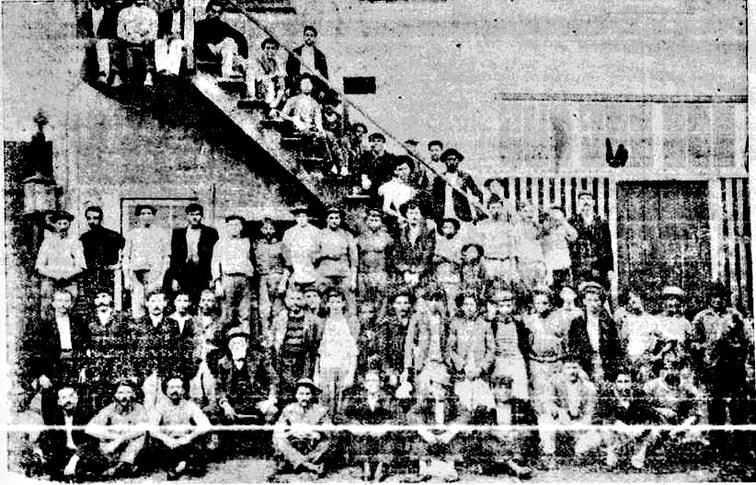 Above: the man seated on the chair (front, left of centre) is in fact Commander A.F.M. Esberard. 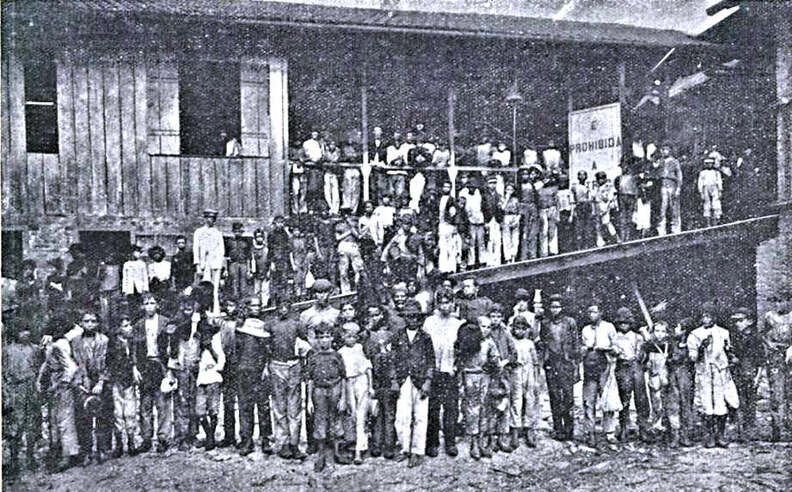 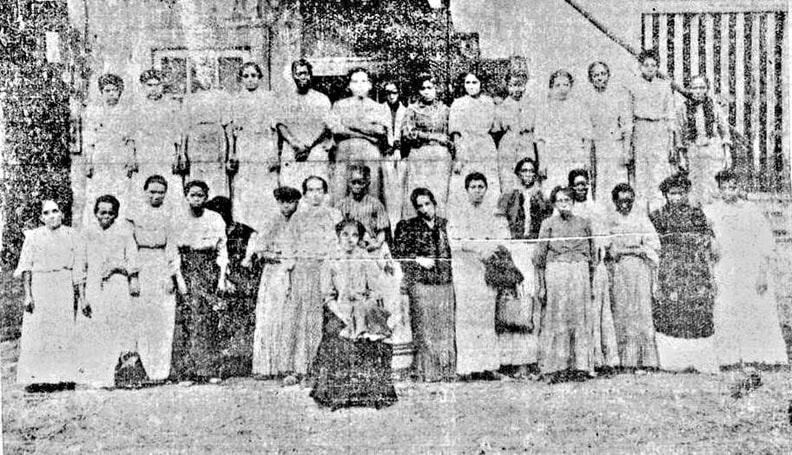 ​In the central section of the buildings were the stables and an area reserved for the workers’ music band – the “Esberard Factory Band” – to rehearse in. The band performed at city events such as philanthropic (charity) functions and parties, inaugurations, celebrations etc.
​
On the other side of the glass works, on São Cristovão Street, in the section facing the beach, there was a two-storey building that occupied around ten-thousand square metres. The ground floor was used to store crucibles, firewood, charcoal and crockery, while the upper floor was used as a staff dormitory and also housed a school for 150 students (comprising staff under the age of 18).

In the 1989 book “O Vidro no Brasil” (The Glass in Brazil) sponsored by the Sao Paulo and Rio Industrial Company, Cisper, the authors say, "A large fire completely destroys Esberard's facilities and marks the beginning of the end of the company's activities". The book also states that Commander Antonio Maria Francisco Esberard "died in 1916 and the factory continued to produce under the direction of his son Etiene Parisout Esberard until 1940, when it ended its activities."

This is not quite what the contemporary newspapers and magazines of the time indicate!

As has been stated above, Commander Antonio Maria Francisco Esberard passed away in 1922, not in 1916. After his death, João Esberard took over as Managing Director (he had been in office for a few years because of his advanced age). Etienne Esberard (the name Parisot, not Parisout, was the surname of Etienne's wife, and was not his name) appeared as Director of the Company from the early 1930s until 1946, the year he retired. Raul de Mello Rego signed the company's Accounts, as Managing Director, from 1947.

​In another promotional move, from 1945 to 1946, lunches and parties were offered to the employees to celebrate the company’s Jubilee. According to the “Tribuna Popular” newspaper of February 3rd, 1946, it was “another high example of worker-employee co-operation”.

In “O Cruzeiro” magazine, 1st September, 1945, a report noted that, despite the war, the Esberard factory was investing in new machines and facilities, and photos were shown of the new warehouses that were being built to replace the old ones. There were also photos of the interior of the factory were it was possible to see new machinery and furnaces.

The 1950s started with a call by the company’s shareholders (1st May, 1950) for an extraordinary general meeting, where they would deliberate on a loan with Banco do Brasil, guaranteeing the company’s real estate. The loan was Cr$ 3,000,000 (R$ 18,750,000, approx. US$ 4,502,450). The approval by the shareholder’s was unanimous. In the same year, on 15th April, there had been a strike of 800 factory workers over the 25% reduction on their salaries as well as a lack of salary payment in March.
Finally, in 1960, the only information that can be seen in journals is of sales announcements of the factory’s properties.

In PART TWO, I am showing a series of extracts from an Esberard catalogue, and

In PART THREE, there is a two page special feature showing some wonderful examples of Esberard's Carnival Glass.
​* Footnotes:

The text of this Article was developed after research in the Hemeroteca da Bilioteca Nacional Digital.

[1] Brazil has undergone some orthographic (language conventions) reforms, detailed below:
The name “Company Glass Factory and Crystaes of Brazil” appears in records between 1890 and 1910 – after which, the name Brazil began to be written with a letter “s” – Brasil.

In the 1940s, Crystaes is now written Crystals.

In the text, the author decided to use the full title: Companhia Fábrica de Vidros e Crystaes do Brasil.

[2] The Brazilian currency has changed over time.

The "Reis" from the colonial period until 1942 and the "Cruzeiro" from 1942 to 1967 were used, a period near the end of the research. Currently, the Brazilian currency is the "Real".

In the research, it was decided to keep the value of the time with the following nomenclature: Réis, for Réis itself, Cr for Cruzeiro.
Following the original values, the updated values are shown in R $ (Real) and in US$ (United States Dollar).

For the conversion of epoch values ​​to the current currency, Real, we used the Estadão Stock Values ​​Converter, and the exchange rate used to convert Brazilian Real to US Dollar is the Central Bank of Brazil quote on 30th September 2019.
Copyright © 2023 by G&S Thistlewood and the individual authors and contributors where named. Protected under all applicable international laws and all rights are reserved. No image, text, or any part thereof may be copied, shared or transmitted to others without permission from the Copyright holders. Information herein may not be posted or made available, in whole or in part, on any website, social media site, FTP site, electronic bulletin board, newsgroup, or their equivalent.