Descriptive marketing speak for iridescent glass
​
We know how the story ends. Out of around one hundred different names that were used for iridescent glass over the decades, in the 1940s and 50s one name rose to prominence over all others … and it stuck. Carnival Glass is what it became known as.

Collectors all over the world came together to use that term. But what about some of the other names used along the way? In the early days of Carnival, terms like Golden Sunset, Pompeian and Venetian were used. A favourite was also Rubigold, a delightfully evocative term chosen by Imperial for what we know as marigold.

​And yet another term was Aurora. Let’s follow the story of this descriptive marketing term, which actually begins way back in the 1880s.
​The “Pottery and Glass Salesman” journal added further information regarding the showrooms of Dugan’s New York agent, William Dealing, writing “William Dealing … is showing the Dugan glassware. He has set aside one entire table for the Aurora Iris ware (Ed. marigold) which is steadily growing in demand. For popular-priced glassware it is better than one might naturally expect. There is a luster and general excellence of finish not ordinarily found in so-called cheap goods. The display is made up of trays, comports, bowls and numerous fancy pieces. The African goods (Ed. amethyst and purple) shown from the same factory are also attracting attention through the unusual beauty of their iridescent effects. Punch bowls and cups are featured.” 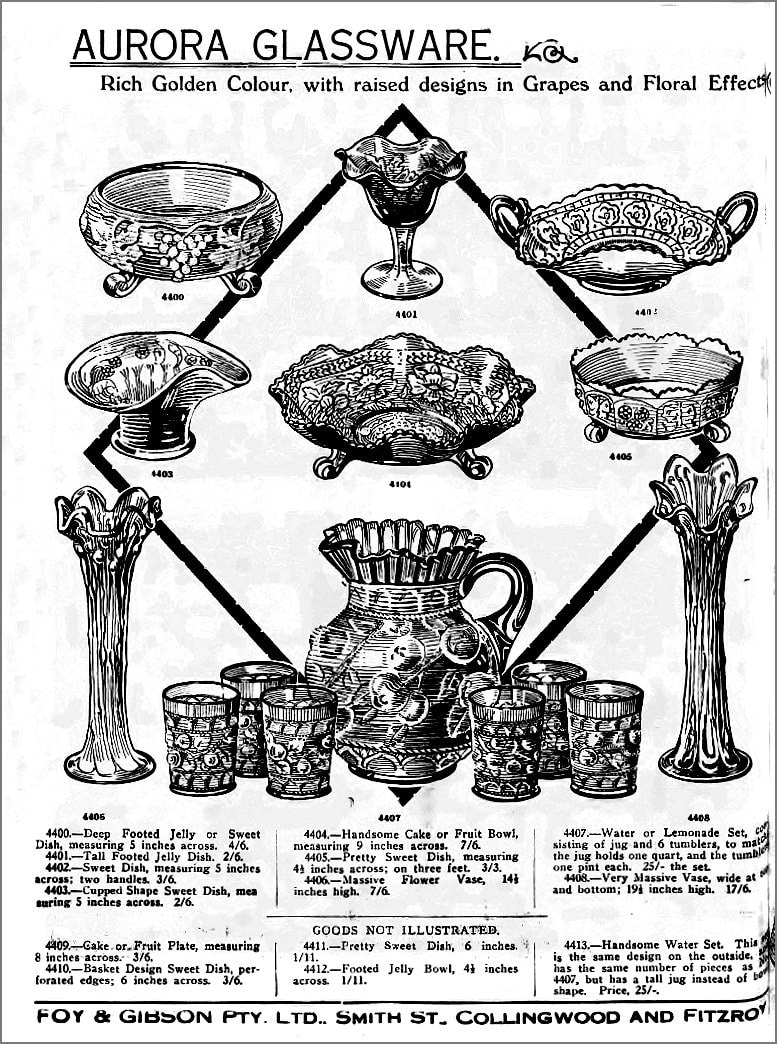 Above: a 1922 sales ad for Foy & Gibson in Australia.
The “Aurora Glassware” being offered was all Classic Carnival made by Fenton, imported from the USA. 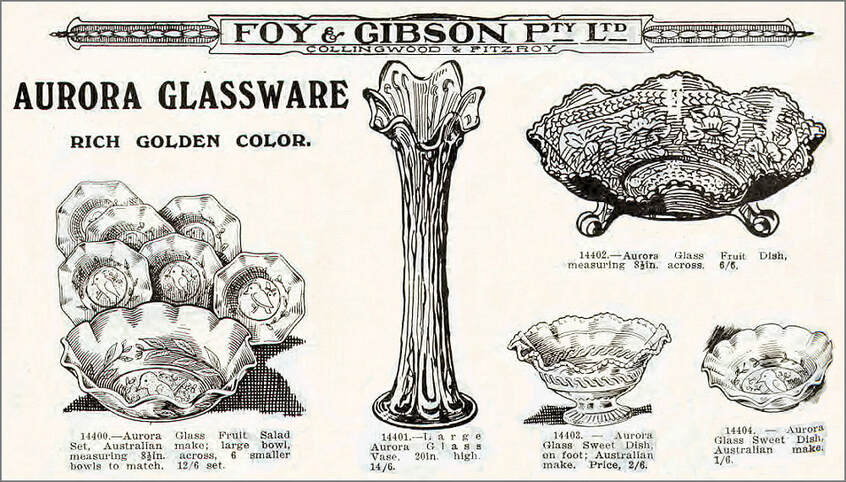 The term "Carnival Glass" actually entered the collectors' vernacular in around the 1940s. A landmark article by Gertrude Conboy in a USA antique journal in January 1952 entitled “The Glass of Many Names Now Known as Carnival” established the name “Carnival Glass” as the definitive term for all collectors worldwide.

Carnival - the very word stirs up a myriad of images: travelling fairs, revelry, colour, fun and laughter. Carnival sums up all the excitement, colour, dynamism, and fizz of Carnival Glass collecting. The incredible buzz, the electrifying thrill, when you find that special piece. The kaleidoscope of colour and the sheer beauty of the glass itself. Long live Carnival.

​Read more "Stories Behind The Glass" here: Carnival Glass Times
Copyright © 2023 by G&S Thistlewood and the individual authors and contributors where named. Protected under all applicable international laws and all rights are reserved. No image, text, or any part thereof may be copied, shared or transmitted to others without permission from the Copyright holders. Information herein may not be posted or made available, in whole or in part, on any website, social media site, FTP site, electronic bulletin board, newsgroup, or their equivalent.