Butterflies at Fenton
​Around 1910-11, Fenton introduced their Butterfly & Fern water set, their Butterflies bonbon and another pattern featuring the butterfly that was to prove one of their most enduring and popular lines – No. 1124, known to us as Butterfly & Berry (and described in early ads as “blackberry and butterfly”). Other shapes were soon added – a hatpin holder and a vase that was made (swung) from the tumbler.
​Butterfly & Berry was a best-seller, and it was also a very useful mould. It was used as an exterior pattern on other designs; Panther, Fantail and Hearts & Trees. And yet more butterflies flew out of the Fenton factory!
When the Carnival Glass Revival began at Fenton in the 1970s, butterflies were ready to emerge from their slumber. In 1970, Fenton issued a Carnival Butterfly ornament, #5170. This version from 1970 had no pattern on its wings, but a year later, the mould had been altered to add a delicate design. 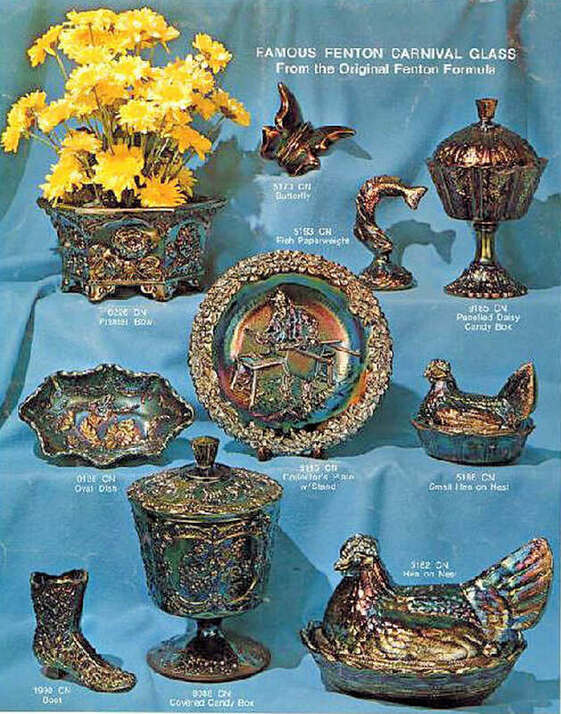 Shortly afterwards, Fenton's re-issued Butterflies bonbon was added to the new lines of Carnival Glass. The Butterfly also morphed into other beautiful forms including candle holder, ring holder and the ever-popular Butterfly on Stand.​​
​​Fenton Moulds
​
One of the educational aspects we have been featuring whenever possible, on our website and here in the ezine, is the original moulds used for making glass. The image below, courtesy the late Howard Seufer and Marty Seufer, shows the Fenton Mould Store in 1995. It’s a remarkable piece of archive.
Two of them are shown above on the right. The top picture is the Butterfly & Berry tumbler mould and the bottom picture is the exterior mould that was used for the ball-footed bowls. Pictures are shown courtesy of the Fenton Family and Fenton Art Glass Co.

There is so much more elsewhere on our website about Fenton’s use of the butterfly motif on Classic Carnival, on their Contemporary Revival, and even on Fenton's re-creation of two Classic designs - a Northwood Butterfly nut dish, and a Dugan Butterfly and Tulip bowl.

Here is an Index with links to where this information is to be found.
Butterflies #8230 reissued bonbon in Orange Carnival: the reissued piece was renamed "Butterfly": Contemporary Marigold

In 1984, Butterfly & Berry Basket #9324 and Fenton's version of Northwood’s Butterfly design on a 3-toed nut dish in Cobalt marigold #8442 (the exterior appears to be Leaf Tiers) appeared in a wonderful selection of 25 pieces. The colour was called Cobalt Marigold, made to a "secret formula" which replicated Classic Carnival production: Cobalt Marigold

Red Carnival featured heavily in Fenton's Contemporary production; In 1992, there was the Butterfly on Stand #5171, and the reissued Butterfly (Butterflies) two handled bonbon #8230: Red Carnival

It would be remiss of us not to include a look at some of the many magnificent butterfly patterns worldwide.
Discoveries from Brazil
​
​The full fascinating story of Esberard, thanks to the excellent research of Claudio Deveikis, is on our website: The Esberard Story
​​And Finally …

At the start of this issue of the December Network ezine, we featured a 1910 photo of an early “Press Shop” at Fenton. One hundred and ten years ago, that “Press Shop” was working, producing glass at the new Fenton Art Glass Company in Williamstown, West Virginia.
​Our enduring and most sincere thanks to the late Howard Seufer and his son, Marty Seufer, for sharing this iconic piece of history.

January Network, 2021 will be released in the New Year.
​
Wishing everyone, all over the world, Happy Holidays and a safe, healthy New Year.
If you have missed any of the previous issues of NetworK and NetworK Specials, they are all here: Back Issues.
​Privacy and the use of your information: we only use your name and email address to send you your FREE Carnival Glass NetworK ezine. We will not share your name or email address with anyone else, or use it for any other purpose. You can change your mind about receiving your NetworK ezine at any time by clicking the unsubscribe link at the foot of every issue, or by emailing us at s.g.thistlewood@btinternet.com
​Join us on Facebook
​
​We would love you to come and join in the fun, and we invite you and your friends to join us all on NetworK's fast growing and very active Facebook Group!
Copyright © 2023 by G&S Thistlewood and the individual authors and contributors where named. Protected under all applicable international laws and all rights are reserved. No image, text, or any part thereof may be copied, shared or transmitted to others without permission from the Copyright holders. Information herein may not be posted or made available, in whole or in part, on any website, social media site, FTP site, electronic bulletin board, newsgroup, or their equivalent.