Firstly, let's look at two ads from over 100 years ago. The ads were placed by Cox & Lafferty, the Representatives for Imperial in New York.
​
Note the comment in the 1910 ad that “The goods themselves talk more forcefully than we can”. How true this is. A black and white image of these beauties would not be able to convey the magnificence of Imperial’s Carnival, especially their "Azur" (purple). The images below demonstrate this to perfection.
​Above left is the interior view of a large size, purple Scroll Embossed comport and on the right is the side view of the same footed comport, showing the Eastern Star exterior pattern. It was described in the ad as a Footed Comport, Crimped (meaning ruffled). Both pictures are courtesy Seeck Auctions.
Above left is an Imperial Grape water set in purple (courtesy Seeck Auctions), which was described in the Cox & Lafferty ad as a Lemonade Set.
​On the right are two Imperial Grape carafes, described in the 1911 ad as "blown vases", in Helios, (courtesy Burns Auctions) and purple.
In both of the Cox & Lafferty ads there is what Imperial called a “blown" vase, and this description was not unusual. Other Imperial vases were also blow-moulded (“blown”) as shown in this extract from Imperial’s 1912 catalogue below (courtesy Jon D Bartell). 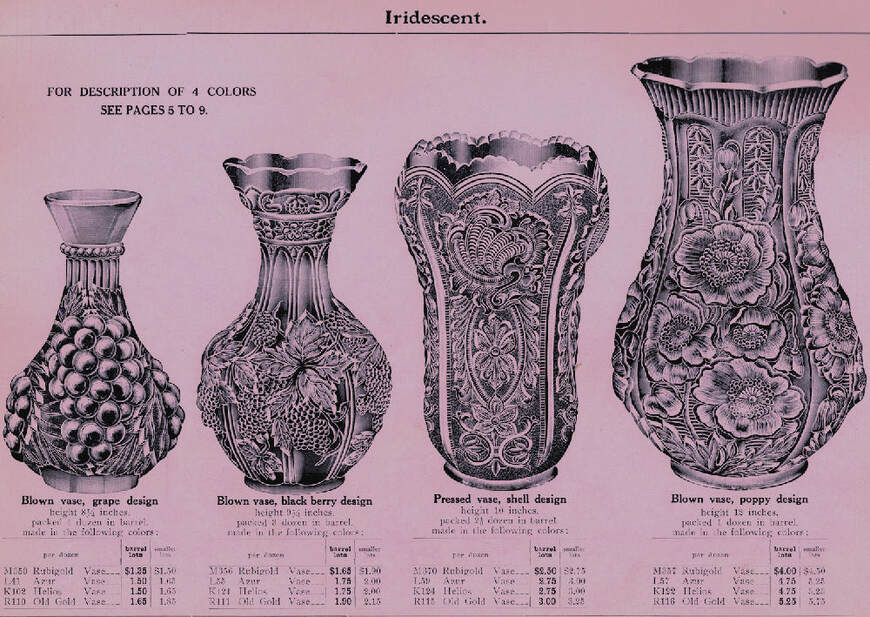 Click on the image to see more information about it and the pieces it showed.
There is also further reading on our website, here:
Imperial’s wonderful Four Seventy Four pattern: La Rochelle
Imperial’s blown vases: Imperial Vases
​God and Home

This is such a wonderful piece of recent history that we’d like to share it with you. We have previously written a very comprehensive feature on the God and Home pattern, but now we can add this splendid 1975 catalogue extract, courtesy Glass Paper Fanatics. We will also add it to our "Story Behind the Glass" page on the pattern. Note that the text below the title states: “A Rare and Treasured Pattern in Carnival Glass Once Again Produced From the Recently Discovered Original Old Moulds”. (In fact, the moulds were “discovered” in the late 1930s).
Subsequently, the Pony mould was then used at Mosser to make a variety of Carnival examples for Gary Levi (Levay Glass). *​
Left: Purple Pony plate. Westmoreland for L.G. Wright. Courtesy Seeck Auctions.
Right: Red Pony plate. Mosser for Levay, made in 2004, trademarked, limited and numbered.
* Following this issue of NetworK, we were contacted by both Tony DeMichael and Dodie Levi who gave us the correct information regarding the extensive range of Pony plates and bowls that were made by Mosser. Our thanks to them for making sure this information available to all Carnival collectors!

As a direct result - and with grateful thanks to Tony and Mary Jo DeMichael, we have been able to publish "The Pony Revival Gallery" which we announced in the following issue of NetworK (#92). The Gallery features the superb collection of Levay Pony bowls and plates that he and Mary Jo have built up.
​Horizon Blue from Imperial

​This 1980 Imperial (Lennox) catalogue extract is most interesting on many levels. The first – and most obvious interest is that it marks an “offering” in Horizon Blue, a version of ice blue in Revival Carnival. It offered a free, limited edition of their Starfire bowl in Horizon Blue, as an inducement to buy more. Customers ordering a minimum $400 of Horizon Blue items, would receive a free Starfire bowl (the number to be issued was 2500 in total). These items should all be marked LIG for Lennox Imperial Glass. 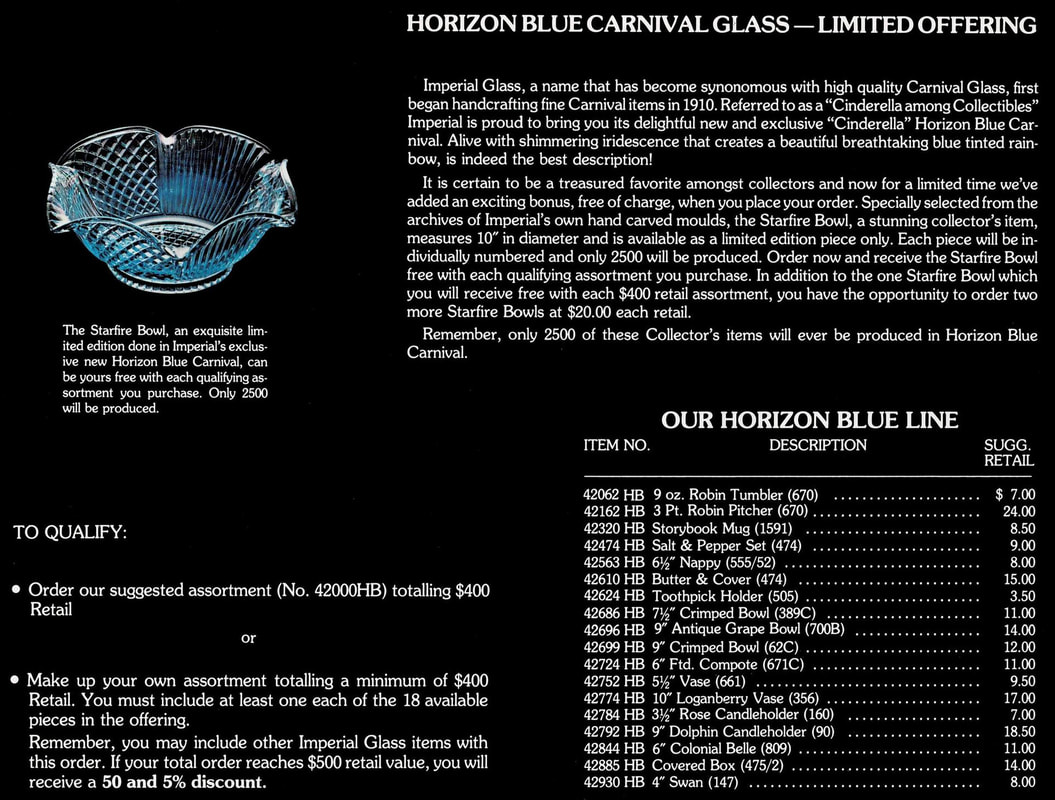 Imperial Glass by Lennox 1980 catalogue extract, courtesy of Glass Paper Fanatics.
Another interesting point is that in the first paragraph it states: “Imperial … first began handcrafting fine Carnival items in 1910.” Now that’s an interesting claim, as our own research (in 2018) established that Imperial’s Carnival was in production from at least as early as July 1908 and this fact was actually reported in the glass trade press in 1909.

We can only assume that the writer of this 1980s ad was focussing on when Imperial began advertising heavily in 1910 (using Cox & Lafferty) and maybe was unaware of the actual commencement of Carnival production at the factory in 1908, some two years earlier.

​Some of the wide range of pieces available in Horizon Blue can be seen in this catalogue extract below, courtesy Glass Paper Fanatics. 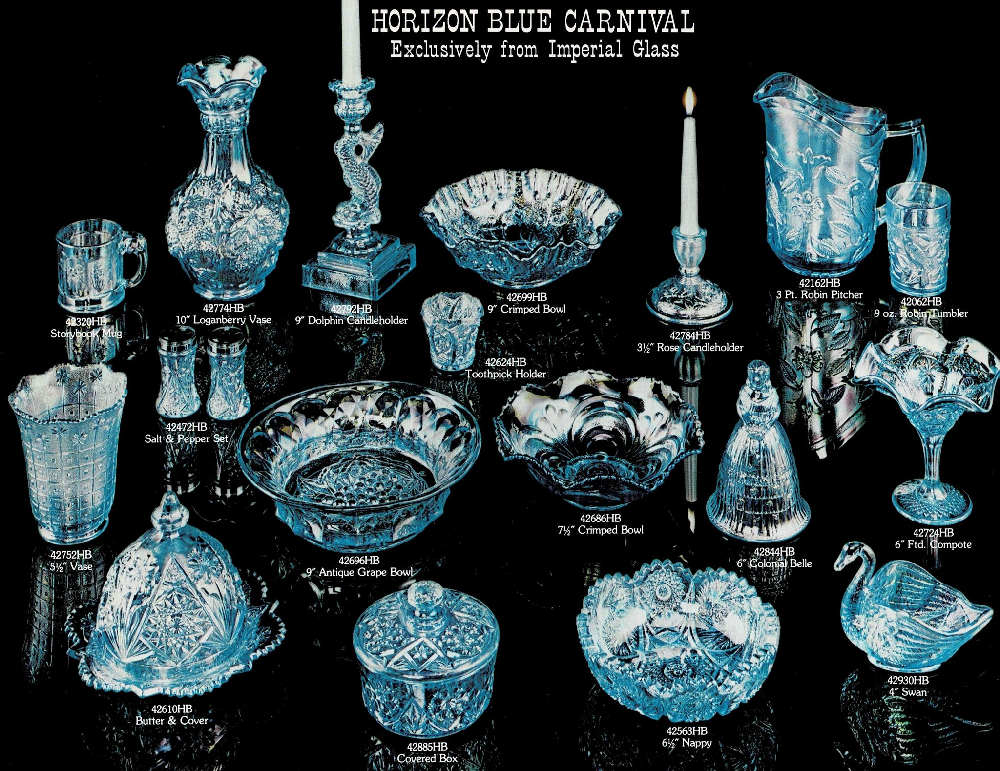 The items shown on this page were (left to right, back row, middle row, front row):

You can see all our detailed research and information on Imperial, Classic and Revival, here on our Imperial Glass Home Page: Imperial Carnival Glass
​Privacy and the use of your information: we only use your name and email address to send you your Carnival Glass NetworK ezine. We will not share your name or email address with anyone else, or use it for any other purpose. You can change your mind about receiving your NetworK ezine at any time by clicking the unsubscribe link at the foot of every issue, or by emailing us at s.g.thistlewood@btinternet.com
​Join us on Facebook
​
We invite you and your friends to join us all on NetworK's fast growing and very active Facebook Group (link is below), and if you have missed any of the previous issues of NetworK and NetworK Specials, they are all here: Back Issues.
Copyright © 2023 by G&S Thistlewood and the individual authors and contributors where named. Protected under all applicable international laws and all rights are reserved. No image, text, or any part thereof may be copied, shared or transmitted to others without permission from the Copyright holders. Information herein may not be posted or made available, in whole or in part, on any website, social media site, FTP site, electronic bulletin board, newsgroup, or their equivalent.