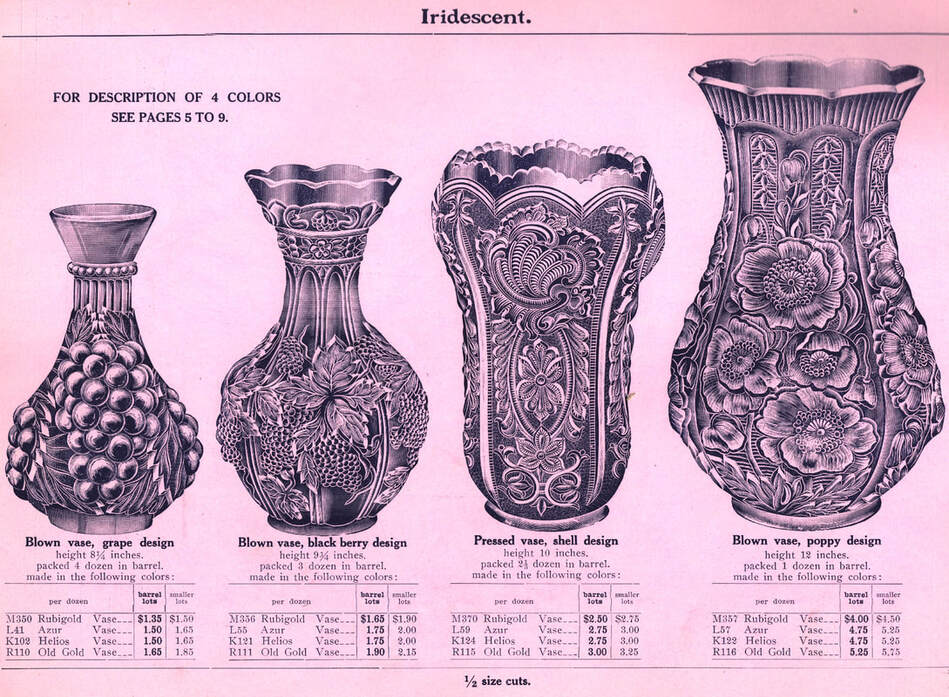 In this catalogue, the pages such as this one, with the pink colouration were used to show their iridescent (Carnival) lines.

​It is a stunning selection of three blow-moulded and one pressed Vases, although one of them - the one on the left, Imperial Grape - is generally described as a carafe by today's Carnival Glass collectors. The vases were offered in four Carnival colours: Rubigold (marigold), Azur (purple), Helios, and Old Gold (amber). Interestingly, the (wholesale) prices varied according to colour - Rubigold being the cheapest, Azur and Helios were mid-priced, and Old Gold was the most expensive.
​From left to right, the vases are:

Originally intended as a vase, as this catalogue image clearly shows, this was Imperial’s #473 Grape design. Carnival collectors call the pattern “Imperial Grape” and the shape is often referred to as a carafe. The vase was re-issued by Imperial in Revival Carnival by Imperial from the 1960s (as a vase shape) and was called simply “Grape”.

This was Imperial’s pattern #477 Black Berry design. Carnival collectors call the pattern “Loganberry”. The vase was also re-issued by Imperial in Revival Carnival from the 1960s with a different pattern number (#356) and was called “Loganberry” at that time.

This was Imperial’s pattern #480 Shell design. Carnival collectors call the pattern “Scroll and Flower Panels”. The vase was also re-issued by Imperial in Revival Carnival from the 1960s and was called “Floral Panel”.

Blown vase, "poppy design"
​
This was Imperial’s pattern #488 Poppy design. Carnival collectors call the pattern the “Poppy Show Vase”. The vase was also re-issued by Imperial from the 1960s and was called “Poppy Show”. Subsequently it was made in a wide range of Carnival colours by Fenton for Singleton Bailey.
Imperial Catalog 100B c. 1914 – 1915.
The same four vases were shown in the Imperial Catalog 100B. It was given to us by the late Frank Fenton when he graciously gave us access to his research material for researching our Carnival Glass books. He dated it to around 1914 – 1915. 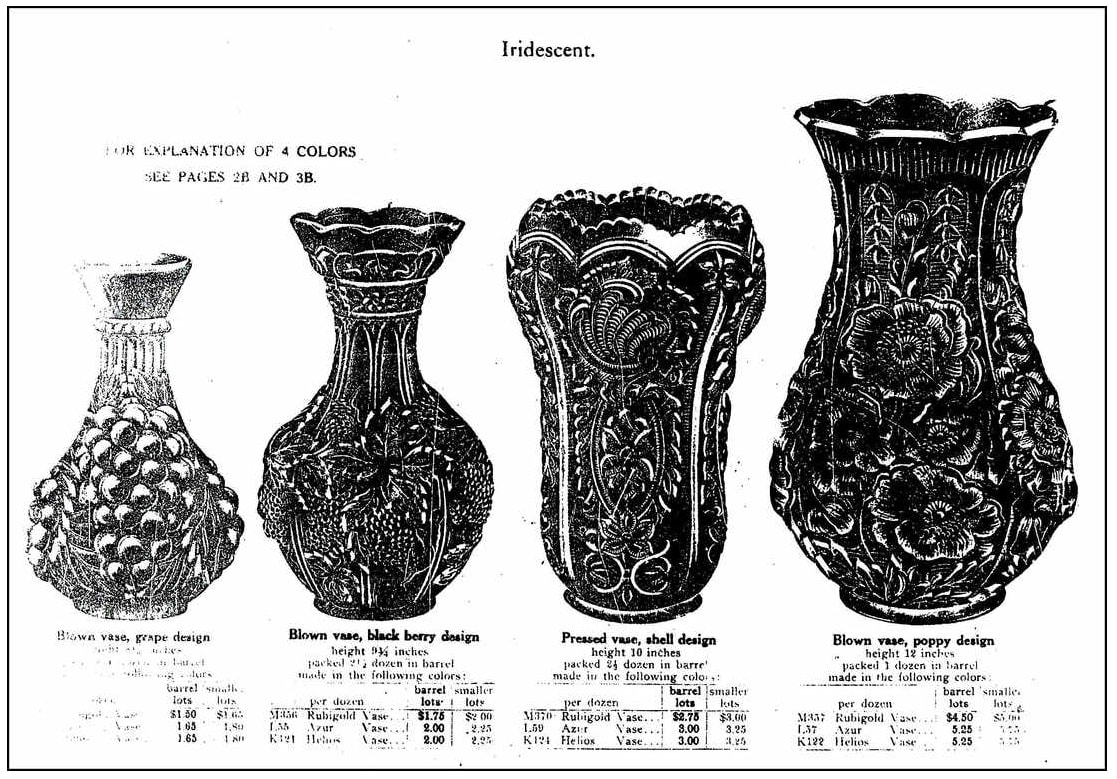 What is particularly noticeable about this catalogue page is that the vases were being offered in only three colours - "Old Gold" (amber) was no longer an option. The other obvious change was that prices had increased across the board since the 1912 prices.
Copyright © 2023 by G&S Thistlewood and the individual authors and contributors where named. Protected under all applicable international laws and all rights are reserved. No image, text, or any part thereof may be copied, shared or transmitted to others without permission from the Copyright holders. Information herein may not be posted or made available, in whole or in part, on any website, social media site, FTP site, electronic bulletin board, newsgroup, or their equivalent.