Carnival Glass Vases Around the World

With our thanks to vase expert Joan Doty for her help.

The Butler Brothers ad clearly did not do justice to the real item - as shown by Joan Doty's picture of her fabulous selection of purple Ripple vases, below. 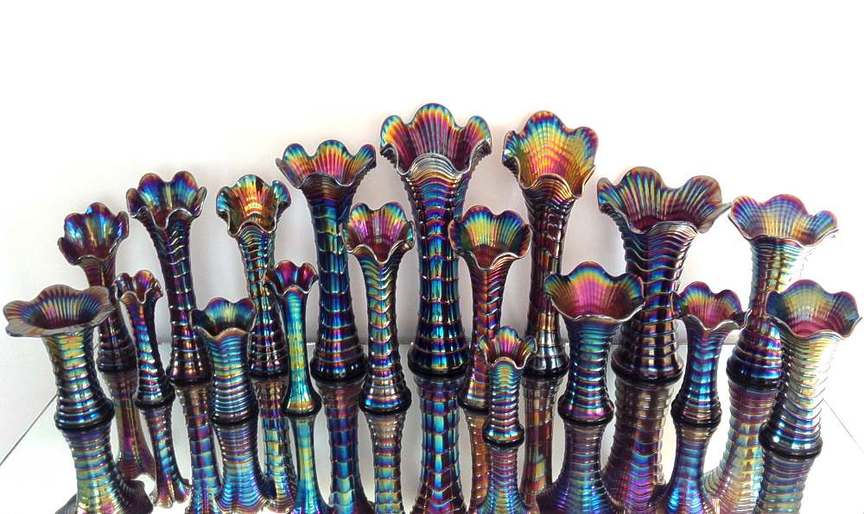 A stunning display of purple Imperial Ripple vases, courtesy of Joan Doty
In the same year, 1911, the short-lived Millersburg factory had an ad showing a vase: Rose Columns vase, as below - $2.10 for a dozen pieces!
By 1912, the Millersburg factory had finally closed (in May), but the other Carnival Glass makers were producing an increasingly varied selection of items to tempt the buyers of the day. Two of Northwood's popular vases, the Corn vase and Daisy and Drape vase appeared in 1912, as shown below.
It was 1913 before Dugan’s vases first appeared in Butler Brothers catalogues. The absence until that date was most likely a marketing decision and should not be taken to mean they weren’t actually producing Carnival vases until then. When they did appear, they were shown in the colour we know as peach opal, and they featured three familiar patterns: Target, Wide Rib and Pulled Loop.

​Europe was on the Carnival scene around the same time; we have catalogue proof that Brockwitz in Germany was making Rose Garden and Curved Star vases in Carnival Glass as early as 1915 and possibly earlier.

Vases were one of the earliest shapes to be made in Classic Carnival, and they also feature among the final shapes to appear. In 1929 Imperial’s Ripple and Dugan-Diamond’s Pulled Loop vases were both included in Butler Brother’s catalogues. And the prize for the very last Classic vase to appear in those catalogues goes to ..... Dugan-Diamond. The date was 1931 and the vase was the Beauty Bud vase.
Types of Vases

It helps to divide vases into two broad groups: swung and “as moulded”.

Swung vases are classed by the size (diameter) of their base as this is determined by the mould base plate and thus is constant. They are not classed by height, as it would vary with the “swing”. The majority of vases made in the Classic era in the USA were swung vases, in fact over sixty different patterns of swung vases are known.
We have a major feature all about Carnival Glass Swung Vases by Carnival Glass ​vase expert, Joan Doty.

“As moulded” vases take on the shape of the mould, without subsequent swinging or lengthening. The top can be shaped in various ways, as shown by the display of Western Thistle vases, below.

The pattern on “as moulded” vases is not distorted by swinging and thus there is a wider range of designs often featuring motifs such as figures, flowers, fruits, birds and geometric shapes.
Whimsy Vases

Although the two basic groups of vases are as shown above, it’s useful to mention a third, albeit very much smaller category, that of whimsy vases. These are items such as pitchers made without a handle to become a whimsy vase or items such as tumblers or spooners that have been shaped into vase whimsies.

Further shaping can take place on both swung and “as moulded” vases, for example, incurved “tulip” tops, tight crimping, ruffles, points, flares and Jack in the Pulpit (JIP) forms. A brief deviation to look at JIPs may be interesting, as there’s a local connection. The origin of the JIP shape on vases is often wrongly credited to Louis Comfort Tiffany in around 1900. Although Tiffany almost certainly gave the style the name Jack in the Pulpit, it’s possible that the style was first developed in Harry Northwood’s original workplace—Stevens and Williams in Stourbridge—some decades before Tiffany used it.

The JIP shape is characterised by an open mouth with the top shaped upward and the lower part shaped downward – like the JIP plant (a form of arum lily, or “lords and ladies”). Most USA Carnival makers produced a JIP shape and indeed, Fenton continues to this day. Although the shape most likely originated in the UK, it wasn’t used on English Carnival, simply because there was very little hand finishing and it didn’t fit the “as moulded” style. However, you can see it used on contemporary studio glass made in the UK, for example, Alum Bay Glass and Isle of Wight Glass.
British made Carnival vases

There were some very unusual examples on display from Sowerby and Canning Town Glass Company. Through the late Bob Clements (a well known CGS member) we have an important link with Canning Town Glass, as Bob used to work there. Thanks to him, the mould for the Thistle vase, pictured above right, now resides at Broadfield House Glass Museum.

Canning Town Glass Company was predominantly a bottle making works. Now stop a moment and look at the Thistle vase. Although it gives the impression of being press moulded, it couldn’t have been. Look at the shape! How was it made? There is no way a plunger could have been used as it couldn’t have been removed. The clue is in the fact that it was made by a bottle making works. Think of a milk bottle (its shape is narrower at the top). The entire process of bottle making is almost fully automated. A feeder separates a stream of molten glass into individual gobs which are then dropped through tubes in a moving track. The gob is shaped into what looks like a short bottle with thick walls and is called aparison. This is transferred to a final mould made of iron, which moves up and clamps around the glass. Air is blown into the glass till it acquires its final, moulded shape at which point the bottle is then released and annealed.

Some rare Carnival vases found in the UK

We certainly do see a wide range of rare items – some of them are even rarer than the Peoples vase – and there was an amazing variety of rare and unusual vases brought in by CGS members for the display, and a selection of contemporary vases.
There were some splendid Brockwitz vases that have been found here such as the Asters oval vase and the Tartan pedestal footed vase. Smoke vases in the Royal Pineapple and Thistle patterns (plus a teeny, tiny miniature Thistle in marigold) and the Czech bulbous vases (with the exception of the Giant Lily) have all been found in the UK. Quite a wide range of scarce Czech vases that were produced by the “Unknown Maker” such as the Regal Tulip were also on display. There were also examples of Rindskopf items such as the Classic Arts vase and Egyptian Queen.

Some other exceptionally rare items that were not in the display but we do know they’ve been found here are a pair of Fenton’s Fine Rib vases in celeste blue and a Northwood ice green Tornado vase (the only one so far known).