Based on our original research in conjunction with Vickie Boley in 2013. 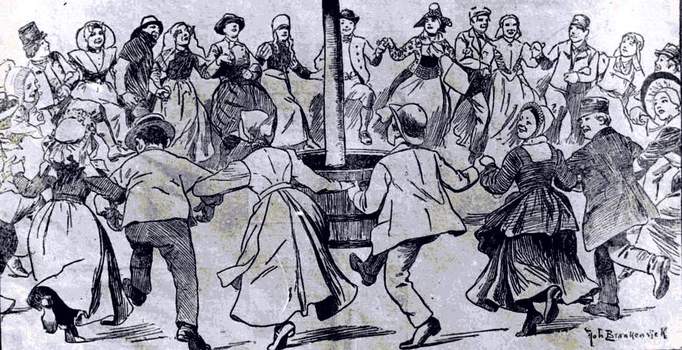 Holland went wild when the birth of Princess Juliana was announced. Dutch National Archives, May 1909
“The article itself is what clinched it for me, where it states that “the crowds (were) singing in the streets” and the origins of some of the more special gifts. This is when the lightning struck for me—the inspiration that this incredible work of art called the “People’s Vase” was made and intended as a gift for the royal heir to the Dutch Throne, the new daughter of Queen Wilhelmina. The vase clearly shows people dancing in the cobblestone street, perhaps with wooden shoes on.”

Vickie further posits “that Mr. Fenton was out to make a name for his new company by creating a special gift for the Dutch Royal family, to mark the birth of the new baby, Princess Juliana.

We found Vickie’s theory very persuasive and fascinating. The birth of the Dutch princess was of huge significance not only to Holland but also to the politics of Europe and beyond (without it the sovereignty of Holland would likely have passed to Germany). Vickie’s enthusiasm set us looking deeper into the contemporary background, and we unearthed a few things that we feel strengthen Vickie’s intriguing theory and research.

Holland itself went wild when the news of the baby’s birth was announced. The celebrations included dancing in the streets, as shown by the illustration at the top of the page from the Dutch National Archives of May 1909. This is the kind of image that would have been publicised far and wide—another one in the Dutch Archives, also featuring Dutch people dancing in a circle, is an official postcard announcing the birth.

​The blue Peoples Vase is very well documented. Jack Wilson states that it was first documented in 1963 when it was sold by Max Penny at an antique show in Wichita, to Emma Schrader for $75. In 1967, Mrs Schrader put it in a John Woody auction when it sold for $1,350 to Charles Thrawley. In 1969 it was sold at Thrawley's auction for $2,700 to a private collector in California. John Woody entered the arena again in 1973 when he bought it from the Californian for $4,500, and doubled his money by selling it in his own auction to Jim Mogg for $8,100. In 1982, it was sold again at another Woody auction to Floyd and Cecil Whitley for $5,000, and it then resided in the same place for around 20 years. In 2006, it was sold at auction for $100,000. Most recently, in June 2018 it again come up for auction, at a club convention, where it sold for $155,000.
Copyright © 2023 by G&S Thistlewood and the individual authors and contributors where named. Protected under all applicable international laws and all rights are reserved. No image, text, or any part thereof may be copied, shared or transmitted to others without permission from the Copyright holders. Information herein may not be posted or made available, in whole or in part, on any website, social media site, FTP site, electronic bulletin board, newsgroup, or their equivalent.