of workers on site. They also observed that there was efficient and innovative semi-automation for the actual pressing of glass - for example, they could work 6 different moulds at the same time. Here’s how the contemporary report explained it:

“In the case of one automatic press there was a revolving table containing a number of different moulds, and pressing was proceeding in half a dozen of these simultaneously; it seemed to be a case of mass production, but adjustable for small orders.”

When did Brockwitz begin making Carnival Glass?
​
It began much earlier than it had previously been thought. The received wisdom was that Brockwitz Carnival Glass was made in the period from the mid 1920s to the mid 1930s. However, in 2005, a 1915 Brockwitz Pattern Book was shared by Dieter Neumann. Shown inside were illustrations of the designs we now call Rose Garden (Rosen) and Curved Star (Zurich), with the astonishing notation under the vases - "GOLDIRIS" and "mit eingebranntem LÜSTERDEKOR".  (fired on iridescence) – this was Carnival Glass (see images below).

This was ground-breaking information at that time. However, our ongoing research into this maker has revealed much more about the early origins of Brockwitz Carnival production: we now have evidence leading us to believe that they were possibly making Carnival as early as c. 1905.

Read our detailed investigation in this major feature: Untangling The Gordian Knot.

In the late 1920s Brockwitz was a major player on the international glass scene. Yet, 20 years later, it was on its knees, struggling to survive. Why?

It was the Double Whammy of the Great Depression and World War II. During the war the factory had been mostly turned over to producing glass for military purposes (tank windows and glass weaponry). There was a 1941 catalogue, and there was still some domestic glass output, but it was small.

After the war, Brockwitz was in the Russian controlled part of East Germany and all materials and tools were taken away to the USSR. There were a few attempts to revive the plant, but nothing really worked, and a fire in the 1960s razed what was left of the buildings to the ground. The glory that was Brockwitz was at an end. Their legacy lives on in some of the finest Carnival Glass in existence.

Read and see more about Brockwitz - click on any image. 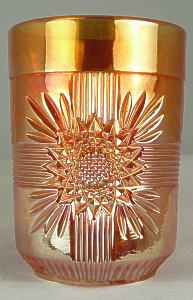 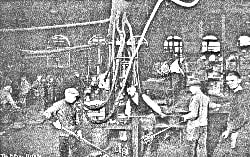 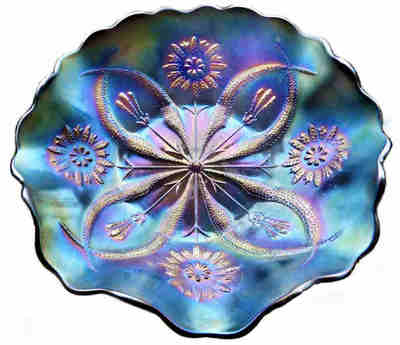 Baby, you're so square! 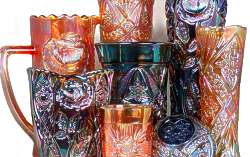 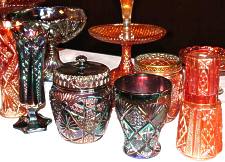 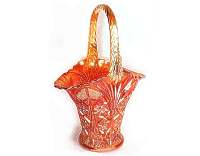 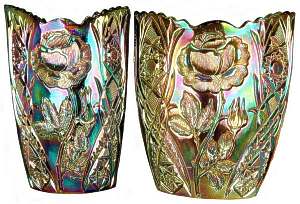 Rose Garden - a mystery solved!
Copyright © 2023 by G&S Thistlewood and the individual authors and contributors where named. Protected under all applicable international laws and all rights are reserved. No image, text, or any part thereof may be copied, shared or transmitted to others without permission from the Copyright holders. Information herein may not be posted or made available, in whole or in part, on any website, social media site, FTP site, electronic bulletin board, newsgroup, or their equivalent.