Based on a Presentation we made, September 2006.
​
Firstly, an enormous “thank you” to all the Carnival collectors who made the magnificent Brockwitz display so unique and utterly show-stopping. Sincere and heartfelt thanks to everyone who helped and contributed. It was undoubtedly a World First. It was impressive, comprehensive and educational. Quite frankly it was mesmerising and absolutely mind-blowing. But most of all it was simply beautiful. There were almost 150 pieces of glass and approaching 40 different patterns shown in the display, including some that we hadn’t even seen before.

​That’s what is so fascinating about Brockwitz - previously unknown shapes and patterns still turn up.

Here is the display - we have  split the picture into two halves to show it here - the central point of the display is the Curved Star epergne, which is in both shots. The top photo is the left side of the display, while the lower photo shows right hand side. 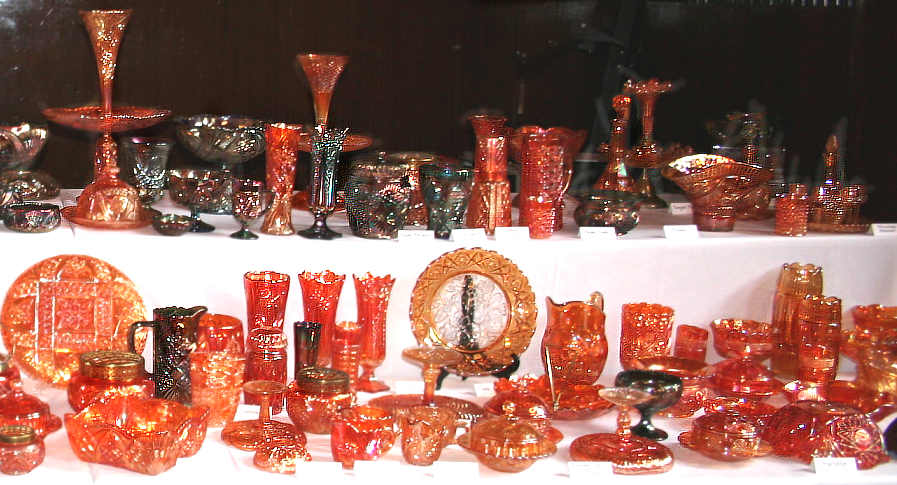 At the time of the presentation, it was almost 20 years to the very month, since the (late) Raymond Notley first put the name Brockwitz into the Carnival glass vocabulary. Since then there has been an enormous amount of research and discovery. In the early 1990s, we worked with glass researcher, the latr Bob Smith and were able to document many Brockwitz patterns and shapes, through the catalogues that Bob had sourced. We then worked with Siegmar Gieselberger in Germany, and even more catalogues appeared for study, courtesy of Dieter Neumann. Today we have an almost unimaginable resource of information at our fingertips - and still fresh items continue to be discovered.
All the above pictures of the display were taken at the event by Stephen Thistlewood.
​
Copyright © 2023 by G&S Thistlewood and the individual authors and contributors where named. Protected under all applicable international laws and all rights are reserved. No image, text, or any part thereof may be copied, shared or transmitted to others without permission from the Copyright holders. Information herein may not be posted or made available, in whole or in part, on any website, social media site, FTP site, electronic bulletin board, newsgroup, or their equivalent.