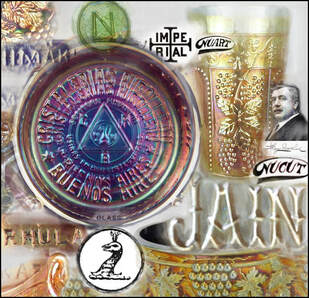 Makers marks or trademarks are not often seen on Classic (old) Carnival Glass, with the exception of the well-known N mark on many Northwood items.
Look deeper though, and you might be surprised at just how many different marks on old Carnival there were. But first, let’s consider the makers that didn’t trademark their old Classic Carnival.

Fenton
In Classic, old Carnival, Fenton did not “sign” or trademarked their Carnival. Any Fenton Carnival with the word Fenton on it, or the cursive F, will be from the Revival years (c. 1970s to mid-2000s). We have a full feature called “Fenton Old and New” that details the trademarks used by Fenton on Carnival from the 1970s onward. Here is the link: Fenton Old and New

Millersburg
Millersburg did not “sign” or trademark their Carnival. The company ceased production in 1911.

Westmoreland
In old, Classic Carnival, Westmoreland did not “sign” or trademark their glass. Their Revival Carnival production from 1970s on, however, was often trademarked with their WG or the word WESTMORELAND. (These later marks can also be seen on glass made by others when they were left on moulds that were subsequently sold.)
​Classic Carnival that was trademarked
​
Above on the right is a genuine Northwood N trademark. They are often placed predominantly (but not exclusively) on the inside of Northwood pieces.

​It even appears right in the centre of Northwood’s Grape Leaves bowl – unmissable and clearly a mark of pride.
​It is important to note that there have been versions of the famous Northwood N mark used by other makers, and these have misled collectors in the past.
​Northwood made the Nautilus shape – but crucially not in Carnival. Later, the Northwood moulds went to his cousin, Tom Dugan, who created it in Carnival Glass – and just a few of those pieces still bore the Northwood script trademark until Dugan removed it from the mould. Here, courtesy and copyright Jeremy Webster, are images of that wonderful Dugan piece with the Northwood trademark.
The three Imperial marks shown above are on a spectacular Imperial Paperweight. Here is more about this piece: Imperial Paperweight.

​On some of their Frosted Block items, Imperial used the moulded mark MADE IN U.S.A.
​* We have a features on U.S. Glass' Athenia and Sheraton patterns, here:

Some Heisey glass is found with their trademark H inside a diamond. But, Heisey did not make Carnival Glass. Some of their glass is known with light iridescence, however it was not iridised by Heisey during production, but instead was cold iridised afterwards by individuals such as Sara Comer, or was water-ambered at one of the springs such as Marlin or Stephens.

We have more information about this here - Heisey Glass and the "Fairy Wand" of Sara Comer - and also here =  Water Ambered Glass
​Old Carnival Glass from Europe, Australia, South America and India can also be found with a variety of fascinating trademarks.
England – Sowerby used a moulded peacock’s head.
Czechoslovakia – some, rare pieces are marked “TCHECOSLOVAQUIE”, or “CZECHOSLOVAKIA”. Some pieces have a British Registered Number (which was in order to gain better acceptance in the British market).
Australia - Crown Crystal marked some pieces with a Registered Number.
Sweden – a few, rare pieces are marked “Eda”
Finland – a few, rare pieces are marked “Riihimaki”, “Karhula”,"Iittala" and "KAUKLAHTI". There is a vey rare item of Riihimaki Carnival that is marked with their trademark lynx (snow leopard) design.
Norway - a newly discovered maker marked Carnival "HØVIK".
India – some pieces are marked “Jain”, “AVM”, “PGW” (for Paliwal Glass Works), or “CB”, and others.
South America – some pieces are marked “Esberard”, “Cristalerias Rigolleau” and “Industria Argentina PAPINI” (Cristalerias Papini).

Also, we have seen, or know of paper labels that were used on old Carnival Glass by makers Riihimaki and Elme, and by a sales brand "Coronet".

Here is a selection of Classic makers' marks from around the world.

Revival / Contemporary Carnival is another matter! Virtually all modern Fenton (by name) and Imperial (by initials IG, LIG or ALIG) Carnival Glass is marked. The situation is more complicated with regard to other contemporary makers, particularly as moulds moved from one glassmaker to another when businesses closed and assets were sold. In general, Contemporary Carnival has more “marks” and “signatures” than old, Classic Carnival

Warning - often older makers marks (such as those from Westmoreland) can be found on newer Carnival pieces and there is the problem of fakes - see our Myth Buster on Reissues, Reproductions and Fakes.
Copyright © 2009-2021 by G&S Thistlewood and individual authors and contributors where named. Protected under all applicable international laws and all rights are reserved. No image, text, or any part thereof may be copied, shared or transmitted to others without permission from the Copyright holders. Information herein may not be posted or made available, in whole or in part, on any website, social media site, FTP site, electronic bulletin board, newsgroup, or their equivalent.