With thanks to Greg Dilian for his help.
Extract from the United States Glass Company's 1919 Export Catalogue, as shown in “U.S. Glass from A to Z” by Heacock & Bickenheuser, 1978. 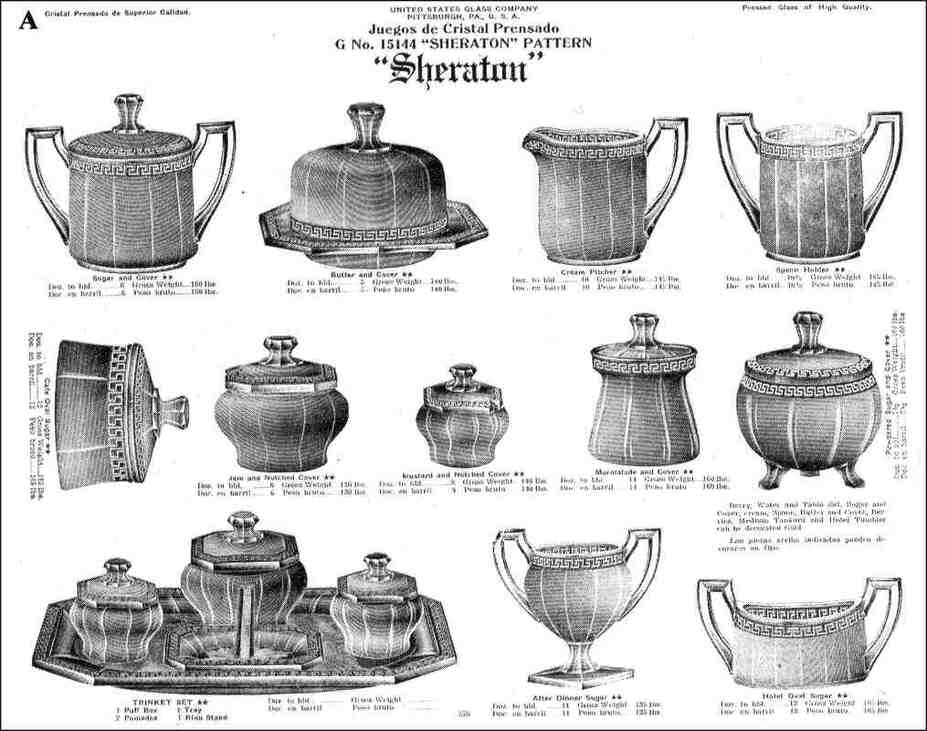 ​Three other shapes in the Sheraton pattern are known so far, each with a light marigold iridescence – the handled creamer, the small footed rosebowl, and the handled and footed vase. The vase has been found with and without the "greek key" motif border (see below, right).

Also there were wholesale ads for Sheraton glassware in the Butler Brothers catalogues in 1913 and in 1914.

The range of shapes is huge - a testament to the great popularity of this pattern.

The 1914 ad provides us with the proof that Sheraton was made in true Carnival Glass, not what is erroneously called a "flashed-on" finish! The use of "Iris" was a recognised term used for Carnival at the time, and to remove any lingering doubt, the 1914 ad states the glass had "royal iridescent tints".
​Shown above on the left is an extract from the 1913 Crockery & Glass Journal, explaining that the Sheraton pattern was "Mission Colonial" in style, named after the English Georgian-era designer, Thomas Sheraton. The description is very "up-market" in its appeal, yet as we can see from the Butler Brothers wholesale ads of the time, it was a relatively inexpensive range of glassware - aimed very much at the mass market.
​See more Stories Behind The Glass
Copyright © 2023 by G&S Thistlewood and the individual authors and contributors where named. Protected under all applicable international laws and all rights are reserved. No image, text, or any part thereof may be copied, shared or transmitted to others without permission from the Copyright holders. Information herein may not be posted or made available, in whole or in part, on any website, social media site, FTP site, electronic bulletin board, newsgroup, or their equivalent.