Lions Foot - The Story Behind The Glass

This wonderful sugar and creamer set appeared in our Carnival Glass NetworK Facebook Group in March, 2019. The story began when Crystal Sheets posted a picture as part of one of our extremely popular "theme" events (this one was on green Carnival and St Patrick's Day).

It is an intriguing set in a vibrant green colour, and it has a fascinating story to tell - a story that covers one hundred years and spans the Atlantic Ocean from Tyneside in England in the 1880s, to Bellaire, Ohio in the USA in the 1980s!

It's a story that would not have been told, but for Crystal Sheet's post on our Facebook Group! 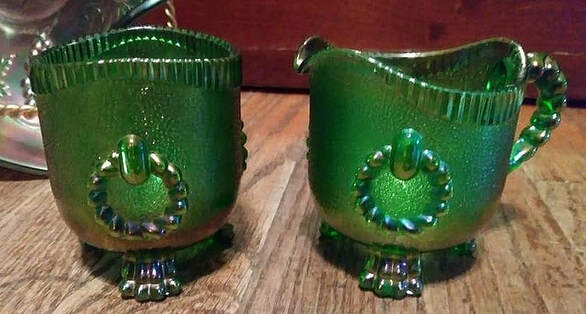 ​And now to the research ... and to The Story Behind The Glass.

We found that the sugar and creamer set was shown in "Imperial Glass Encyclopedia Vol lll" by members of the National Imperial Glass Collector's Society (edited by James Measell), 1999. There is a small image of the set in a series of catalogue pages for Imperial's production of milk glass in the 1950s. The book confirms that the pieces would almost certainly have been marked "IG". They were shown as "1950 - 31 3-Toed Sugar and Cream Set".

"Encore" was the clever title of three reference books and a subscription newsletter produced by Dorothy Taylor between from 1975 through to 1993. These publications are a goldmine of contemporaneous information about the many Carnival Glass reissues and reproductions that were being made at that time. The financial problems at Imperial, and the efforts to save the plant were reported on a number of times: naturally, for collectors of Imperial glass, there was also concern about the future of their extensive inventory of moulds - some being their own dating back many years, and some being moulds acquired from other factories.

Encore reported that after Imperial closed in bankruptcy in August 1984, a group of business people from Bellaire, Ohio formed the group called “Save Imperial Committee”. The plan was to preserve the plant as a glassmaking enterprise and also as a tourist attraction. They kept open the Hay Shed (a sales outlet) stocked with items from the Imperial production, and new production made by L E Smith, using moulds Smith had acquired from Imperial.

Also, in around 1986-87, four ex-Fostoria glassmakers started making glass in a small section of the old Imperial plant as part of the plan to become a tourist attraction. Operating as Pioneer Glass Company, they reportedly had use of about 40 moulds and were able to melt down and use glass that was left over in the factory. A subscriber to "Encore" reported that the Hay Shed was full of pieces Pioneer Glass was making, as well as Imperial consignments, Viking and Smith.  Specifically the report confirmed that they were making sets of sugar and creamers which are signed IG but there is also an S I C mark on them. At that time they were making the sets in an iridised cobalt colour.

Sowerby's pattern number 1129. The catalogue image is of the sugar, and the creamer in Jet glass, made in the late 1880s, is in our collection.
Is there any connection?

As far as we can tell, our Jet creamer from the 1880s is the same as Crystal's iridised green creamer made in the 1980s - there is an uncanny similarity between not only the overall shape and design, but also the extremely complex pattern on the underside of the base of both pieces. It seems to us very unlikely that the Sowerby mould moved to Imperial in the USA - yes, it's a slight possibility, but we do not know of other Sowerby moulds that moved across the Atlantic.

​Sowerby's ceased glassmaking operations in March 1972, and their glassmaking interests were passed to the Nazeing Glassworks in Essex (near London). We have a contemporaneous report that in the early 1970s, around 400 of Sowerby's old moulds were taken down to Nazeing in Essex, and that many of them were in very poor condition and they were left to rot. Maybe later, they were scrapped. Of course, if Imperial had in fact acquired this mould, it would have had to be earlier than 1972, as we know that Imperial's version of this creamer was made in and from the 1950s.

The strong possibility is that Imperial's design was simply "inspired" by the Sowerby original. Sowerby exported a huge amount of their glass to the USA (and we ourselves have found many super examples of Sowerby glass on our numerous trips to America). There is also an interesting snippet that George Sowerby visited America on behalf of the firm in 1880 with as many as 2,000 samples [of Sowerby glass] for display, which was reported in the American Pottery and Glassware journal.

It is well known that glass designs were copied or reworked all around the world, and there are various examples of designs that originated in English glass plants being used to "inspire" look-alike versions elsewhere.

So, Crystal's little creamer and sugar have given us an amazing Story Behind The Glass.

Read more in our series of The Story Behind The Glass in our Carnival Glass Times feature.
Copyright © 2023 by G&S Thistlewood and the individual authors and contributors where named. Protected under all applicable international laws and all rights are reserved. No image, text, or any part thereof may be copied, shared or transmitted to others without permission from the Copyright holders. Information herein may not be posted or made available, in whole or in part, on any website, social media site, FTP site, electronic bulletin board, newsgroup, or their equivalent.