Butter Dishes from Brazil - Part One

​With grateful thanks to Cláudio Deveikis and Álvaro Henrique Nicolau Aguiar for their ongoing research into Carnival Glass from Brazil, and for their photographs shown in this article. There is more to see on Cláudio’s excellent website.

Carnival Glass was not only produced worldwide, it is also collected and studied worldwide. This fascinating array of butter dishes, courtesy of Álvaro Nicolau, both tantalises and intrigues. Some have a familiar look to them while others are mysterious and rather exotic.

Brazil has long had strong ties with Europe, both in terms of trade as well as immigration and settlement - links not only with Poland (as in our article on Garland and Bows) but also Germany and other countries. Looking closely at some of the butter dishes featured here it is possible to see not only influences in design, but also perhaps some suggestion of mould acquisition. Perhaps too, glass craftsmen from parts of Europe settled in Brazil, bringing their skills and ideas. 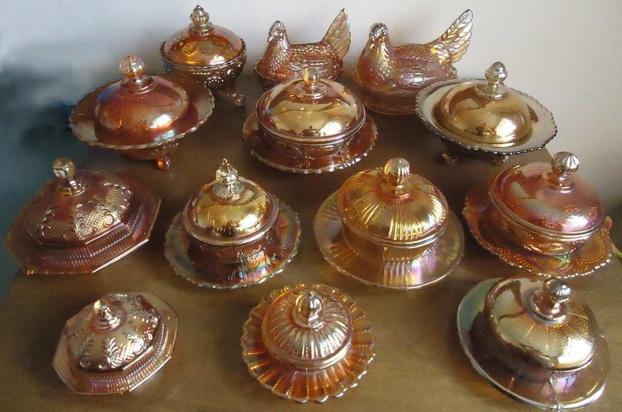 Some of the patterns on these butter dishes, however, are distinctly different and very beautiful, suggesting that they were created and produced in Brazil. Let’s take a look at these delightful pieces …
​
Eye of the Queen

This is another pattern that Cláudio has reported previously, with information that it may indeed have been made by Guarani in Brazil.
Of particular interest here is that there are two very different butter dish shapes in this pattern.
There are more details of Eye of the Queen in our Collectors Facts page on this pattern.

Cabouchon aka Cabochão
​
Cláudio reports that this splendid butter was found in Rio de Janeiro, Brazil, where one or two others have also been found (another was found in Santelmo, Argentina). Álvaro Nicolau notes that one of the butter dishes he found in this pattern was wrapped in a newspaper that was dated 1932, which suggests a time frame. The picture below, right, shows the inside of the lid and the exterior base of the dish.
Rosarinho, aka Little Rosary
​
The large finial on this butter reflects the ribbed and beaded design. The maker is considered to be Esberard, as Claudio reports an uniridised example with ESBERARD moulded on it. The pattern was possibly inspired by a Marinha Grande design from 1901, and we also know of other pattern "links" between Marinha Grande and Esberard, for example Cabralia and Iraci designs (both are shown in our Collectors Facts).
See more Butter Dishes from Brazil in Part Two
Copyright © 2023 by G&S Thistlewood and the individual authors and contributors where named. Protected under all applicable international laws and all rights are reserved. No image, text, or any part thereof may be copied, shared or transmitted to others without permission from the Copyright holders. Information herein may not be posted or made available, in whole or in part, on any website, social media site, FTP site, electronic bulletin board, newsgroup, or their equivalent.