Vaseline Glass – The Magic of the Arc Light

​​What made Vaseline glass so popular, back in the late 1800s and the early 1900s?
​Arc lights were mainly used to illuminate large areas – factories, hotels, exhibition areas and shops (especially the new department stores), as well as shop window displays and street lighting. And these were exactly the sort of places that Vaseline glass would have been on show. In the glassworks itself, perhaps and in the large hotels and exhibition halls where Trade Shows were staged.
​​Crucially, arc lamps were extensively used in showrooms, department stores, and retail establishments of all kinds.

They emitted brilliant light with a blue-violet glow, that enabled customers to see the goods (much better than dim gas lamps) and they extended the opening hours for trading.
Above, left: the arc lamp was still popular in 1908, especially for retail stores, as this ad in the “Merchants Record and Show Window” journal demonstrates.
​Above, right: Taken from a 1908 “Stanley G Arc Lamp” booklet, the illustration above shows Wanamaker’s New York store was lit “exclusively by arc lamps”. 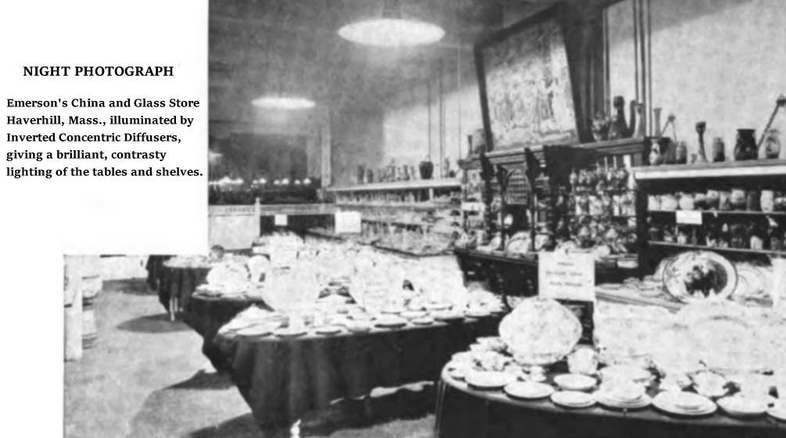 The brilliance of the arc lighting is clear from this 1905 photo taken inside Emerson's China and Glass Store in 1905
​Arc lights were also used to illuminate splendid shop window displays. The art of window dressing was extremely important, and elaborate set pieces were designed to show off the goods (a crucial marketing strategy in the days before radio and television advertising). And with arc lighting on many town centre streets too, imagine just what a display of Vaseline glass might have looked like, glowing vividly on a dark night, illuminated by the light of all the arc lamps. Customers would have seen these magical effects on the glass and likely purchased accordingly – possibly being just a little disappointed later when they looked at their glass in their own homes without the arc lighting!​