Sterling Furniture (Fenton) ​- The Story Behind The Glass 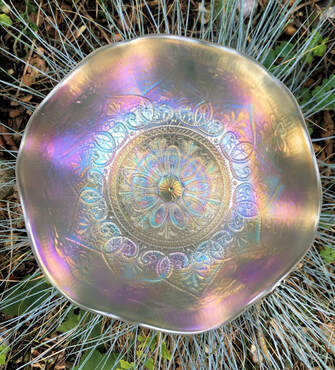 The design utilises Fenton’s Garden Mums pattern, (which conveniently had a blank space in the centre), a design shared with several other advertising pieces, such as Geo W Getts Pianos and Exchange Bank. The pieces are around five to six inches in diameter and are only known in amethyst. There are four shapes which were all fashioned from the same mould - a ruffled bowl, a round bowl, a plate, and a handgrip plate.

John Resnik researched this company for his book "The Encyclopedia of Carnival Glass Lettered Pieces" published in 1989, which was—and still is—the only comprehensive study of lettered (and advertising) Carnival Glass. John unearthed information on this piece (and others) by research in the Public Libraries, and he found out that the Sterling Furniture business was started in Sacramento by Reason G. Davies, and then he expanded to San Francisco in the late 1800s. The first telephone listing for Sterling Furniture was 1900 and the company arrived at the 1049 Market Street address in 1910. The business moved to Daly City (Ca) in 1961, and from 1970 Sterling Furniture stopped retail selling and specialised in manufacture only.
"Temporary railroad tracks were laid on key streets in the city so that gondolas and ore carts to haul away the heavy chunks of stone, brick, and mortar that were being lifted from the wreckage by steam shovel and crane". (University of San Francisco www.usfca.edu/about/history/recovery_rebuilding/ ).

Could it have been in 1908 to promote the new building at the 1049 Market Street address? It’s possible, but we feel it is unlikely. The company would still have been mainly concerned with getting back on its feet after the earthquake at that point; the timing also seems a bit too soon for Fenton to have been offering the souvenir glassware. A year or two later seems much more likely - and this would tie in with known dates on lettered pieces. So, what could have been the stimulus around 1910?

Our theory is that Sterling Furniture most likely commissioned Fenton to make the advertising pieces for them to coincide with the California Admission Day Festival that was hosted in San Francisco in September 1910. The festival was held to celebrate California’s admission to the Union on September 9th 1850.

​By 1910, San Francisco had finished rebuilding after the devastating 1906 earthquake and fire and it was ready to rock and roll; ready to show everyone that it was back on the scene. And show them it did! The Festival was officially classed as a World’s Fair and it was intended to be the grandest that had ever been seen in California. Days of celebrations, parades, fireworks, regattas and more were planned by the Admission Day Festival Committee. Furthermore, prizes were to be awarded to the businessmen who decorated their buildings and stores in the most original and artistic manner.
​Market Street was the main thoroughfare of the rebuilt San Francisco, so Sterling Furniture was situated right at the centre of the activities. The San Francisco Call reported in July 1910 that the “committee on decoration is busy on Market St …where experiments are being made for the general street decorations”. There were to be band concerts on Market Street too and special treatment with regard to new-fangled lighting was reported in August: “The scheme for the electrical illumination of Market Street is after the style of the arbour arches in Fillmore Street with 150 lights to each arch and a large globe lamp pendant from the center”.

A Golden Canopy of Electricity on Market Street
The main parade began on Market Street itself which was described variously in the newspapers as “a golden canopy of electricity” and “a brilliant avenue of flags and festoons”. The importance of the Market Street location was emphasised by the fact that two “moving picture” operators from New York were set up at vantage points there to film the three days of fabulous parades and pageants. “San Francisco is in Gala Attire” shouted the headlines in the papers.

​On September 8th the Los Angeles Herald wrote: “Fifteen hundred red, green and yellow devils, each burning fire of his own will dart in and out of the long line of the Admission Day parade Saturday night, giving it the general admonitory aspect of a gargantuan illuminated serpent. For the first time in the history of carnival warfare a corps of artillery with mortars will discharge bombs at the crowds along the streets and explode to cover their targets with confetti.
Interestingly, we know from contemporaneous ads that Sterling Furniture was also a seller of Carnival Glass - including Carnival made by Northwood!
See more Stories Behind The Glass
Copyright © 2023 by G&S Thistlewood and the individual authors and contributors where named. Protected under all applicable international laws and all rights are reserved. No image, text, or any part thereof may be copied, shared or transmitted to others without permission from the Copyright holders. Information herein may not be posted or made available, in whole or in part, on any website, social media site, FTP site, electronic bulletin board, newsgroup, or their equivalent.