Sperry & Hutchinson (S&H) began the scheme in the USA in (amazingly!) 1896, and they were followed in Australia just two years later, in 1898, by the Green Coupon scheme.

In 1915, over in Australia, the well-known Sydney Department Store, Marcus Clark & Co., were strongly promoting Green Coupons for all kinds of purchases including “Cutlery and Glassware”. 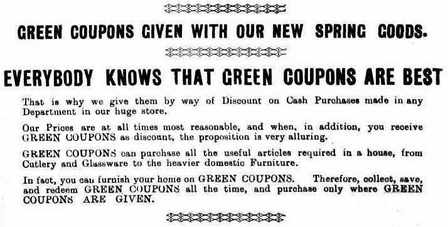 Marcus Clark & Co. Ltd. ad from 1915
And just over a decade later, Marcus Clark were offering Double Green Coupons with a Kookaburra or Kangaroo Carnival bowl by Crown Crystal. We have to agree with the ad, which says: "Sensational Value"!

Marcus Clark & Co. Ltd ad. October 1929 Newcastle Sun (New South Wales)
​Also in Australia, Bushell’s Tea Company ran their own sales promotional scheme, offering customers the opportunity to save tea packet labels and exchange them for gifts. And can you guess what some of those gifts were? Yes – CARNIVAL GLASS.

Bushell’s issued catalogues through to the 1930s that included a variety of Classic American Carnival and Australian Carnival (plus some European glass too, though we can’t confirm it was Carnival).
​
A 1923 Bushell’s catalogue page, shown below left (courtesy of Gary Workman) had a whole selection of Fenton items on offer: master bowls in the Two Flowers, Little Fishes and Panther patterns; regular bowls in the Holly, Vintage and Leaf Chain patterns plus a Leaf Chain plate. Another Bushell’s catalogue shows a Sowerby Derby rose bowl and several Inwald vases in the Laurier Nelly pattern – but we can’t confirm they were Carnival.

A 1929 Bushells catalogue offered a variety of splendid Australian glass, which included a Crown Crystal Swan master and nappies, which was described as an “Iridescent Swan Salad set, comprising 1 large bowl and 6 small dishes, for 72 1 lb. or 144 ½ lb. labels”.

​It certainly was worth drinking all that tea for, wasn’t it!
And on to the 1960s, USA

Read more of The Stories Behind The Glass in Carnival Glass Times
Copyright © 2022 by G&S Thistlewood and individual authors and contributors where named. Protected under all applicable international laws and all rights are reserved. No image, text, or any part thereof may be copied, shared or transmitted to others without permission from the Copyright holders. Information herein may not be posted or made available, in whole or in part, on any website, social media site, FTP site, electronic bulletin board, newsgroup, or their equivalent.