We are extremely grateful to Joy Stallock Ostlund for providing us with these catalogue extracts
​and permission to show them on this page. The extracts are Joy's Copyright.

​We have explored in several articles elsewhere on this website, how Mail Order (both wholesale and retail) was a vital sales and distribution option used by Carnival glassmakers to get their wares to the buying public. Perhaps G. Sommers and Co. is not as well-recognised as, say, Butler Brothers, Sears Roebuck, or Montgomery Ward, but it was significant nonetheless. G. Sommers & Co. was a wholesale supplier based in Minneapolis / St. Paul. The company began in 1882 (as B. Sommers & Co.) and grew into one of the largest businesses of its kind in the USA. Low prices, good quality merchandise, strong mail-order advertising, and honest dealing were considered to be key to its operations. Its main area of distribution ranged westwards from the Great Lakes to the Pacific Ocean, and from the Canadian border to California. It closed in 1940.

​Joy first posted one of the extracts in our Carnival Glass NetworK Group on Facebook in mid-January 2021, and subsequently she very kindly took the time and trouble to photograph all the ads in the (very fragile) catalogue that showed Carnival Glass - which turned out to be exclusively from Fenton. The images in the ads are very well drawn, with a lot of detail, and the descriptions that were used to help sell the items were quite different to the ones used by, for example, Butler Brothers. "Tiffin Iridescent" (a deliberate association with the up-market Tiffany glass), "Glitter Iridescent", and "New Northern Gold Iridescent" are very evocative and attention-getting - surely they played to Sommers' reputation for strong mail-order advertising. 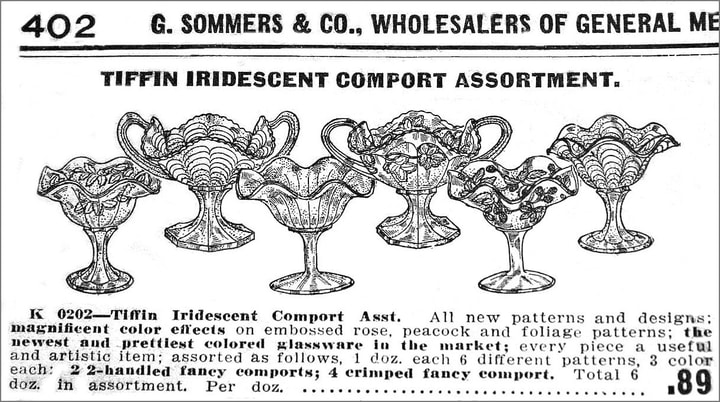 The pieces in this comport assortment were all made by Fenton. They are, left to right: Wreath of Roses, Peacock Tail (handled, bonbon shape),
​Stippled Rays or Smooth Rays, Wreath of Roses (handled, bonbon shape), Blackberry Bramble, and Peacock Tail.
​The use of the description "peacock" patterns was perhaps a reference to the overall iridescent appearance of the pieces, but it also seems to suggest that the writer recognised that the pattern we now call Peacock Tail was exactly that - a stylised peacock feather. A similar ad in Butler Brothers in the same year described the Peacock Tail comport as "feather embossed". 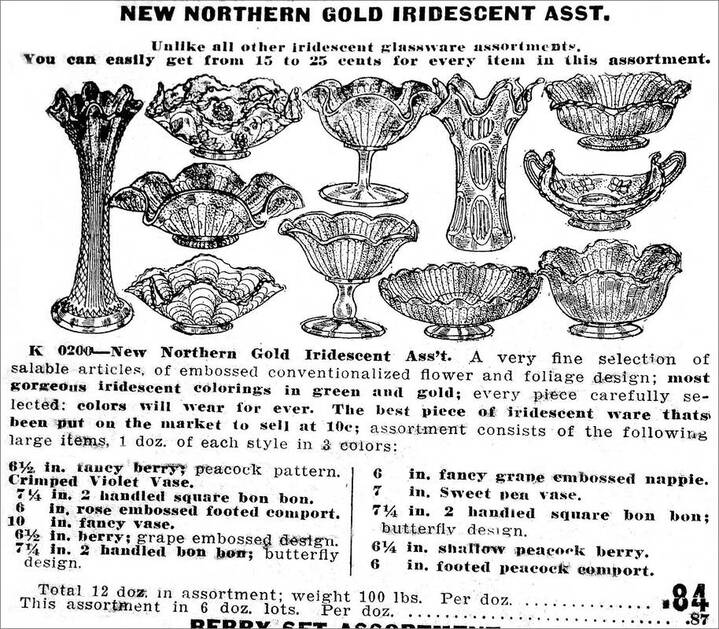 The pieces in this assortment were also all made by Fenton.
There are two vases - Diamond Point Columns (swung vase, left) and Diamond and Rib (slightly swung, right).
The other pieces are (left to right): top row - Vintage berry bowl, and Stippled Rays or Smooth Rays comport and berry bowl;
middle row - Stippled Rays or Smooth Rays berry bowl (left) and Butterflies handled bonbon (right);
bottom row - Peacock Tail berry bowl, Stippled Rays or Smooth Rays comport and two shapes of bowl.
The use of "Aurora Iridescent" in the description (above, left) is fascinating, and indeed confirms just how widespread was the use of this particular expression. In our article "​Aurora" - Descriptive marketing speak for iridescent glass, we show how the term "Aurora" was used to describe iridescent glassware around the world, from as early as the mid-1880s, through the Classic Carnival period, and the Carnival Glass Revival in the 1960s.
​We have other extracts from a later G. Sommers catalogue - from 1926 - which primarily featured several assortments of Imperial's Carnival Glass. They are published with grateful thanks to, courtesy and Copyright of Stan Hoegerman, here: G. Sommers & Co. Catalogue, 1926
Copyright © 2023 by G&S Thistlewood and the individual authors and contributors where named. Protected under all applicable international laws and all rights are reserved. No image, text, or any part thereof may be copied, shared or transmitted to others without permission from the Copyright holders. Information herein may not be posted or made available, in whole or in part, on any website, social media site, FTP site, electronic bulletin board, newsgroup, or their equivalent.