​Carnival Glass NetworK – the Story Behind the Stories.

A Look Behind the Scenes over 25 Years (as at June 2019).
​It’s our Silver Anniversary! 25 years ago, we published our very first issue of NetworK, in 1994. Within months the circulation had soared, and soon we were truly International, sending our NetworK journal all over the world. So, what’s the story? We’ll share with you some of the dramas and the joys that we’ve experienced over the past 25 years of intensive Carnival Glass research and writing. You’re going to read about things that you won’t have heard before! Buckle up, this could be a very revealing ride!
​
​We ruffled some Feathers!

As is so often the case when presented with new things, some people were not happy about our venture, even suggesting that we should have asked their permission. Goodness! It seemed we were challenging the natural order of things – how dare we launch our own Carnival Glass research journal. We were lambasted with some very unpleasant comments in the weeks immediately after we sent out our first edition, but we’re pleased to say that very many more people supported our endeavour, and we increased our circulation very rapidly, with a growing number of copies being shipped Internationally, to many countries around the world. Yes! We were up and running!

Our first issues of NetworK were incredibly low-tech. We had an Archimedes computer, a printer, a camera, and our Carnival collection. But … no internet (this was 1994, don’t forget). Technology has moved so quickly that it’s hard to remember just what it was like back then. We used Stephen’s photos and Glen’s drawings for illustration, but we were not able to afford colour printing at first. 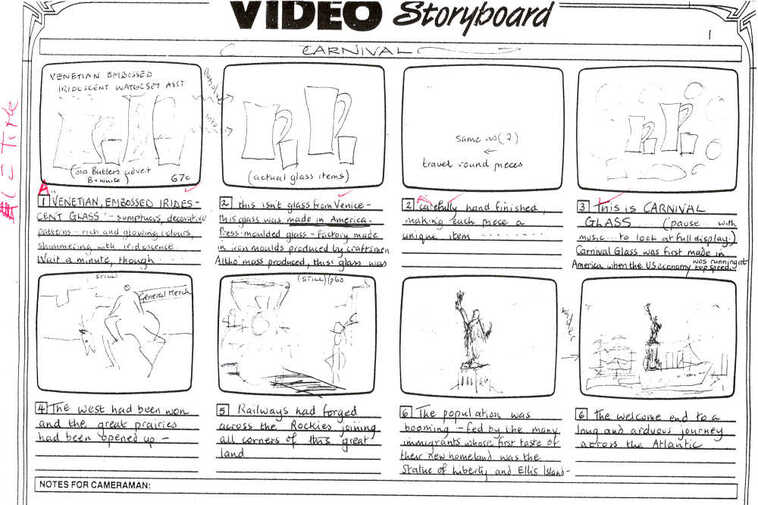 ​Peacock Themes: here’s an extract from the third issue of NetworK in 1994, in a major feature on the peacock designs, entitled “The Eyes of Argus”.
​​“The peacock was a favourite motif in Japanese design, dating back to the 8th century. As the Japanese style began to inspire the Arts & Crafts and Aesthetic Movements of the late 1800s, and the slightly later Art Nouveau period, the peacock motif soon entered their repertoires …
​
Who first called it Classic Carnival?

Another innovation that we pioneered in 1997 was the use of the term “Classic Carnival”. In fact, there’s a rather interesting story behind this that needs to be told. While we were working on "Carnival Glass the Magic & the Mystery" we needed a clear and logical way of referring to early, old Carnival. There were debates among collectors, and various terms were put forward, including “vintage” and “old”. Glen discussed it with her mother (the late and much missed, Pauline) as she, a glass collector herself, was a wise, thoughtful lady. “You should call it Classic Carnival” she said.

​It epitomises the quintessential essence of the early output, like a classic novel or a classic car – something recognised that exemplifies and typifies that era of Carnival. So, we pioneered the use of the term “Classic Carnival” over twenty years ago - and we used it in our books and all our writing from that point onward. We also contacted our friend, Dave Doty, who was working on his first Field Guide at the time, and he agreed to use it too. So, hats off to Glen’s mother, Pauline, for coining the term “Classic Carnival”.
Bob Smith’s “Carnival Glass Trek of a Lifetime”

One evening, way back in 1996, we had a phone call from a gentleman in Boston, USA. He explained to us that his name was Bob Smith – he’d seen our NetworK journals, and he realised we were enthusiastic researchers searching for the truth. And so began an enduring, close friendship and a ground-breaking research partnership, that covered three decades until Bob’s sad death in 2017.

​Before Bob’s visit to, and research into glassmaking in India, the received wisdom among Carnival collectors (based on a story in a UK club newsletter) was that items marked JAIN were from a particular Czech maker and stood for JAblonecky INdustrisklo (Jablonec aka Gablonz glass industry), and that no Carnival had been made in India. Along with many others, we took this for a fact, so it was a mental challenge for us at first to accept Bob’s information. But he was persuasive and convincing – and crucially, he had the evidence to substantiate it. Bob was absolutely correct that Carnival had been made in India. We began to work in partnership with Bob, sending letters by AirMail to various Indian companies in the glass making area around Firozabad.

​Subsequently, and working closely with Bob, we delved into Carnival from Europe. Our joint work established solidly the Carnival output from both Inwald and Rindskopf in Czechoslovakia (that previously we had been told by an “expert”, was a red herring and impossible).

​We corresponded with Bob daily, sending emails back and forth, as we explored new horizons.
​
​Bob Smith lived …  and died … for his tumblers
​
When we visited Bob in Boston, we fully understood the depth of his passion for Carnival. Long-time Carnival collectors know that it took Bob many, many years and enormous dedication to assemble his unique tumbler collection. It was his life, his joy, his reason for living - an inspiration to other collectors. It may not be well known that Bob lived frugally in a tiny, cramped, two-room apartment with a shared bathroom, on the first floor of a multi-occupancy
As we have explained, Bob had given his tumbler collection to Glen, and we gave Bob our solemn promise to take care of it and keep it together, in accordance with his clearly stated wishes. In Bob’s own words “No one is going to be able to collect such a large collection again – they are just not out there”. It was never to be sold. It was to be his legacy – a celebration of his life and work. He died, trusting and believing this ... but in distressing circumstances, the tumbler collection was removed from our control. We were prevented from fulfilling our promise to Bob.

The next chapter of the story – the sale and the brutal dismemberment of Bob’s entire collection in June 2019 – is tragic. It is the absolute opposite of what Bob always told us (and many others) that he wanted. It feels to us like complete disrespect and disdain for Bob’s dedicated work and his personal integrity. We tried to prevent it - we were raised to believe in high personal, moral and ethical standards; standards that we cannot reconcile with the shameful denial of Bob's enduring wish that his legacy collection should be preserved intact for future generations. It makes us wonder how anyone can sleep at night, having profited from this debacle.

And Bob … can dear Bob ever Rest in Peace, now?
Don and Connie Moore

Don Moore was a much-respected Carnival collector and writer, who had sadly passed away in 1991. His wife, Connie, recorded a series of interviews for NetworK, facilitated by the late Dale Matheny, about Don and Connie’s collecting experiences. We featured them in four issues of NetworK in 2000 and 2001, along with some of Don’s previously un-seen cartoons. Our all-time favourite was the Brownie Mary story, that we re-visited in our NetworK ezine #2 (2015). Here is another delightful story told by Connie, that was in our printed NetworK 27 in 2000.
​
​“Food for Thought” based on narrated tapes from Connie Moore, NetworK 27, 2000

Let’s first turn the clock back to the mid-1970s, when Don and Connie were living in Alameda, California. People would often call Don up offering glass for sale. One day he took a call from a lady in San Jose who had some Carnival she had decided to part with. Not a large collection, mind you – just a single Grape and Cable punch set, Don made all the necessary arrangements and he and Connie drove the thirty miles or so to San Jose, finally locating the lady’s condo in a delightful residential complex known locally as “the villages”. As they walked inside, they were greeted with the sight of a stunning, master Grape and Cable punch set, complete with twelve cups, sitting resplendently on a table. The colour was an extraordinarily beautiful purple.
​
​
The children had treated the glass with respect and care – well of course, it DID provide them with tasty cookies. Years later, when the sisters grew up and moved away, each agreed to take a punch set. Of course, when Don and Connie were offered the beautiful purple one, they took it home and treasured it for many a long year (perhaps sometimes wondering about the little hands that used to reach in and take out a cookie).
​The Middle Years

In 2001 we said farewell to the last printed issue of the NetworK journal (No. 32), although we did issue a NetworK Special on Czech Carnival.

Last, but not least - our own website, Carnival Glass Worldwide, which we compose, run and maintain ourselves. The three elements of our Carnival Glass world - our website, our Facebook Group, and our NetworK ezine - all work together seamlessly!
​By maintaining the site ourselves, we can ensure a speedy response to anything we are told by collectors and researchers around the world. We also decided from “day 1” not to get into prices or values – there are other sources elsewhere on the web, and we believe that the past auction results on the websites of Seeck Auctions and Burns Auction Services give a very reliable view of the current market.
Copyright © 2023 by G&S Thistlewood and the individual authors and contributors where named. Protected under all applicable international laws and all rights are reserved. No image, text, or any part thereof may be copied, shared or transmitted to others without permission from the Copyright holders. Information herein may not be posted or made available, in whole or in part, on any website, social media site, FTP site, electronic bulletin board, newsgroup, or their equivalent.