Welcome to the second issue of Carnival Glass NetworK. We’re delighted with the huge response to our first issue, and we’d like to thank all who sent us such lovely messages. You can read more in “Feedback” at the end of this issue, and don't forget that you can chat with us on Facebook - just follow the links.

​And here it is, in two sizes and two variations: the small size marigold, the large size green, and the small size, ribbed purple 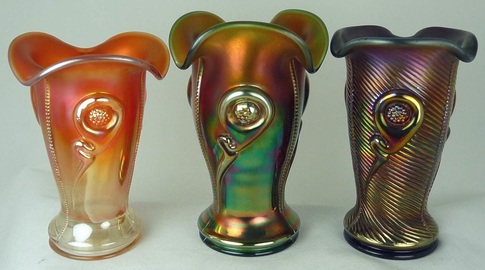 Oddly, it was described in the promotion as “Opalescent Glass”, but that was actually a mistake – a case of the advertiser not knowing the difference between opalescent and iridescent (that happened quite a lot in the past and still does even today).

And - another quirky fact – it's interesting that it was described as having a “rose decoration”. It is just possible to see it that way, of course, and there are various other interpretations of the design motif. Marion Hartung, one of the early Carnival Glass pioneers, saw it as a tornado and it was her choice of name that stuck with collectors, while another early pioneer, Rose Presznick, saw it as a tadpole! In fact we believe it was originally meant to be a stylised peacock feather.

Don Moore was a well known Carnival Glass collector, researcher and writer, from California. In the 1990s, Don’s widow, Connie, recorded a series of stories for our NetworK journal that were based on her reminiscences. We thought we would share some of these again, so we begin in this issue, with the story of Brownie Mary, as told to us by the late Connie Moore.

As keen collectors (and purchasers) of Carnival, Don and Connie Moore frequently received telephone calls from people wanting to sell their glass or maybe have it appraised and valued. One fine Californian morning the phone rang and Don answered it. Connie heard the familiar words “Oh yes, I’ll come and appraise” followed by a slightly surprised “When? Today?” Connie smiled, reaching for her jacket and purse; she knew what Don’s next words would be. “Sure, of course I’ll come today…”

The Moores set off to San Francisco to see the lady who had telephoned. She lived in an old Victorian home that had been converted into apartments – once inside, the Moores saw that all the Carnival was set out in antique cases and looked very attractive. The lady herself turned out to be charming and surprisingly quite knowledgeable about Carnival. She had all the books that were available at the time and had obviously been a keen collector. Don carefully went through all her glass, itemising and appraising it, but he was a little taken aback when she blurted out, “I want to sell the lot … right now!” A deal was promptly struck and the Moores left the apartment with the entire collection (around 75 to 100 pieces of Carnival).

When they arrived home a short while later, Connie walked inside to make some room for the boxes of glass. She idly (and routinely) turned on the TV and then froze to the spot. “Don” she called. “DON. Come here right now and look at this!” A live news feed was on the TV and the outside broadcasting cameras were focussing on the old Victorian house that they had just left! And the nice lady whose Carnival Glass they had just bought was being led out of the front door by the police. The strap line on the TV read … “Brownie Mary arrested.”

Piecing the story together from the news reports, the Moores were amazed to discover that the lady had been under surveillance for several weeks previous. The news footage from several days earlier included shots through the windows, into the house interior. Don and Connie could just make out the antique cases full of Carnival Glass. It turned out that the lady had been selling “hash brownies” (cakes laced with marihuana) hence her nickname “Brownie Mary.”

Naturally Don and Connie were stunned by the entire thing and they learned that “Brownie Mary’s” premises had been watched and filmed for some time prior to their visit. And it turned out that literally moments after the Moores drove away with their glass purchases the police swooped in and arrested “Brownie Mary.” As you might imagine, news of the bizarre situation spread very rapidly and Don and Connie were inundated with calls from people wanting to have a piece of “Brownie Mary’s” Carnival Glass. It sold very quickly!
Indiana Harvest pattern

Above left is an ad from The Ottawa Journal, Canada, November 1973 offering an Indiana Princess punch set for Can $7.77, and on the right is a page from an Indiana sales catalogue from the early 1970s showing Indiana Glass' Harvest pattern - a very popular grape design. It was one of their most widely produced patterns, made in large volumes, in many, practical everyday shapes.

And last but not least ... a taste of Summer, in Carnival Glass tumblers. 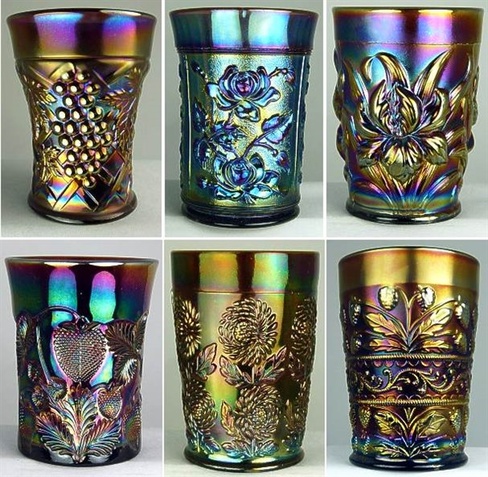 One of the responses we received was on the Carnival from Australia feature in NetworK#1, where we had noted what the comparative value of twelve shillings and sixpence might have been (it was the cost of a full 7 piece Kingfisher berry set). Leila Galvin from Australia sent us some fascinating comments regarding values: “12/6 was a lot of money. The basic wage after the war was about four pounds”. Leila added some comments on later prices: “In 1944, 12/6 was more than my week’s pay which was 10 shillings a week plus “keep” in my parents’ shop. Thirty years later when I started collecting, a week’s pay only bought one piece of Carnival Glass. These days you can buy several pieces with one week’s pay.” Many thanks to Leila for her comments.

We hope you have enjoyed this issue of our NetworK ezine. We aim to bring the next one out very soon. Meanwhile, we would love to hear from you, and maybe you would like to "chat" with us on our Carnival Glass facebook pages.
Read more issues of NetworK
Copyright © 2023 by G&S Thistlewood and the individual authors and contributors where named. Protected under all applicable international laws and all rights are reserved. No image, text, or any part thereof may be copied, shared or transmitted to others without permission from the Copyright holders. Information herein may not be posted or made available, in whole or in part, on any website, social media site, FTP site, electronic bulletin board, newsgroup, or their equivalent.