Tornado Vases - the Eye of the Storm!

Research into the Tornado Variant carried out by Glen & Stephen Thistlewood
​and published in our Schiffer Book, "A Century of Carnival Glass" in 2001. 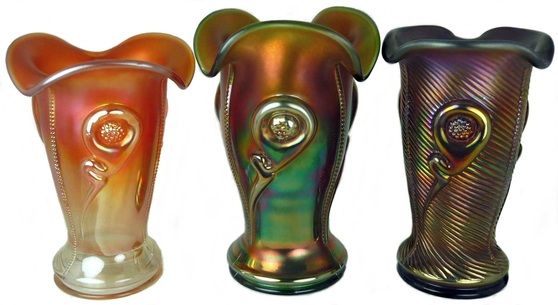 Above, three Northwood Tornado vases.
Left, marigold “small” size (6” high); middle, green “large” size (6.5” high);
right, purple ribbed version (6” high).
Tornadoes! Swirling, whirling maelstroms: twisters! But is that really what the design on these fabulous Northwood vases was originally intended to be? Why did this vase ever get saddled with the name Tornado?

We have to lay the blame at the feet of Marion Hartung, resident of Kansas City, slap bang in the middle of Tornado Alley. Understandably she saw the swirling motif as a tornado, but is that really what it was meant to be? It’s most unlikely that Harry Northwood would ever have been up close and personal with a Kansas twister: he was born and bred in Stourbridge in the UK, and lived in West Virginia for only a relatively short time when he designed these vases. Marion Hartung wasn’t alone in misinterpreting what the motif represented - another Carnival Glass pioneer, Rose Presznick, thought it was a tadpole.

They were not called Tornado vases at the time they were being made and offered to the buying public. Here are two newspaper ads from 1911, that both offer Tornado vases as special offers to entice shoppers. Interestingly, both ads mistakenly refer to "opalescent" instead of "iridescent", and note how the ad on the left specifically compares the Carnival Glass item with the more expensive Tiffany glass (confirming the was Carnival Glass was seen as "Poor Man's Tiffany" - see "What's in a Name?" to read more about other names that have been given to Carnival Glass).

We have a different line of thinking altogether. From our extensive and detailed research carried out and published in our Schiffer Book, "A Century of Carnival Glass" in 2001, we concluded that the pattern was very likely intended to represent a peacock feather, and that when Harry Northwood made his press moulded Tornado vases, he was very possibly imitating art glass vases (below, centre) that he had seen elsewhere.
It’s interesting to note that Harry Northwood also made some rare examples of his Tornado vase in marigold with Vaseline “tornadoes”.  One of these sold at a Mickey Reichel auction in Missouri back in 1996; you can see the vase on the front cover of the auction brochure, above right. The use of green “trails” (tornadoes or peacock feathers, you can take your pick!) is interesting. If we go back to the Harrod’s ad, we find out that a special new technique was being used called The New Emeraldene Decoration. This was described as being “a beautiful and original production showing graceful lines of transparent green glass on white crystal”. It is possible that Northwood used the idea of the Emeraldene Decoration for the Tornado vase you can see on the auction brochure.

A further twist (pardon the pun) to the Tornado vase story is that a single press moulded, pedestal footed vase (i.e. the shape of the vase trio shown) complete with tornado/feather motifs and “zipper” lines, is known, and is believed to be a Northwood piece. Could it be that Harry Northwood first made a press moulded Tornado vase with a pedestal foot (just like the Stourbridge examples) but decided it was too difficult to produce in that shape and so chose instead to make the simpler Kralik shape?

The inspirations behind Northwood’s Tornado vase are fascinating and in all probability came from two sources: Stourbridge (in England) and Bohemia. The links, the inspirations, the colours, the shapes and the motifs are all intriguing and fascinating to study.  And as for the motif - tornado or peacock feather eye? The choice is yours to call it what you will.  As Juliet said in Shakespeare’s Romeo and Juliet: “What’s in a name? That which we call a rose by any other name would smell as sweet.”
Copyright © 2023 by G&S Thistlewood and the individual authors and contributors where named. Protected under all applicable international laws and all rights are reserved. No image, text, or any part thereof may be copied, shared or transmitted to others without permission from the Copyright holders. Information herein may not be posted or made available, in whole or in part, on any website, social media site, FTP site, electronic bulletin board, newsgroup, or their equivalent.