“Dedicated to All Carnival Glass Lovers”

Garrison’s narrative, as reported in the Fall, 1968 issue of O. Joe Olson’s Historical Issue of “Carnival Glass News & Views”, was dedicated “to all carnival glass lovers” and he noted that he was writing especially for the younger generation of collectors. He added “My hope is that they will enjoy an accurate description of carnival as it was in the beginning of our era of collecting.”

​Here are some of Phil Garrison’s wonderful memories beginning in the late 1940s.

This explanation by Garrison provides a fascinating insight:

“When we started collecting, I would often inquire from the older storekeepers hereabouts as to the source of their Carnival. They reported it was common practice to put out barrels of Carnival nested in straw and as customers paid their bills they were invited to select a tumbler or a piece toward a table setting as a gift. In my opinion this sheds light on why water sets and table settings often show a variance in color. It means the pieces probably came from different barrel lots and from different pours of glass. That is why a perfectly matched set is hard to find.”

Garrison reported wryly on being “insulted by ‘Experts”.

​Here’s what he wrote in 1968: “let me say that in the last twenty years or so I have lost count of the number of times that I have been insulted in antique shops from New York to Florida when I would ask for Carnival Glass. Occasionally I would find and buy some, but often they would sneak it from a box under the counter or from the back room. It has only been in the last seven or eight years that it has been a pleasure to display our beautiful pieces of Carnival Glass. I remember that among the first twenty five pitchers I had, there were three Northwood Grape & Cable tankard pitchers in purple.”

​A friend of the Garrisons was a dealer named George Heller, who had always been ready to help. ​​Garrison reported that:
25 cents for Rose Show Pieces

Phil Garrison’s account of some of the items he had owned and the prices he paid back in the 1950s is fascinating. He picked up Rose Show pieces for 25 cents; water sets cost him between 25 cents and $1.50; complete Grape & Cable table settings could be had for $3.50 while full Acorn Burrs punch sets in purple cost just $7.

An interesting observation was that pastel Carnival colours such as ice blue and ice green were not very popular among the early collectors. Garrison said they were more difficult to sell than the “dark” pieces. He was also offered what was described as “odd pieces” for sale, which included a Farmyard bowl, and he was able to purchase one collection that included four Elks bowls (two Detroit and two Atlantic City).

O. Joe Olson was a “dear and good friend” of Phil Garrison. More recent collectors may not recognise the name, but Olson was also a true Carnival Glass Pioneer.

​In 1964 he established the very first club devoted to Carnival collecting – the Society of Carnival Glass Collectors - which sponsored the first club souvenir. It was an Inverted Fan and Feather tumbler, made by Joe St. Clair, and moulded on the base "Original Carnival Society, S.C.G.C. 1964-69 O.J.O" One of the original colours was ice blue (300 made), pictured below courtesy of Bob Smith.
​
​

​We are ending this Pioneer Special #2 by quoting Phil Garrison again, as he looked back over his history of collecting and learning about Carnival.

​“For these many years our close connection with Carnival Glass has been a glorious experience. It has helped to make life brighter through knowing many wonderful collectors in person and through their letters.” How true his words are – we echo them – life is so much brighter because of all the wonderful friendships we make in Carnival Glass. Treasure them all – they are precious. 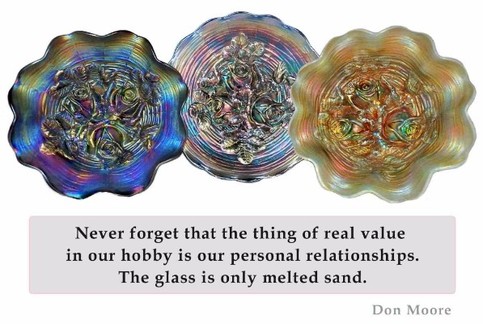 Special thanks to Ray and Judy Steele for their tremendous help in sourcing O. Joe Olson’s writings and to the late Dale Matheny for his personal recollections of Don and Connie Moore.

We hope you have enjoyed this NetworK Special. Do take a look at the unique information elsewhere on our website. We most certainly enjoyed researching it and recording it for Carnival Glass posterity!

If you have missed any issues of NetworK, read them all here: Back Issues
​Read more issues of NetworK
Copyright © 2023 by G&S Thistlewood and the individual authors and contributors where named. Protected under all applicable international laws and all rights are reserved. No image, text, or any part thereof may be copied, shared or transmitted to others without permission from the Copyright holders. Information herein may not be posted or made available, in whole or in part, on any website, social media site, FTP site, electronic bulletin board, newsgroup, or their equivalent.