​Welcome to our November issue of NetworK. Included in this issue are several special items. We have an astonishing discovery from the Zabkowice glassworks in Poland: an exquisite and rare Boar novelty paperweight. There is also a NetworK "exclusive reveal" of several more Carnival patterns that we have positively identified as products from the English glassmaker, Matthew Turnbull. Turnbull’s Carnival deserves to be fully recognised; indeed, they made some distinctive and unusual items that have been found in many countries around the world. We also have other "reveals" which might just save you money, or help you avoid buying something that turns out to be a reproduction.

The ad, above left, was featured in a November, 1920 edition of the “Chickasha Daily Express” (Chickasha is a town in central Oklahoma). A full page of the newspaper featured a large ad for the opening of the Buie & Wallace Gift Store – and there among the “Boys’ Velocipedes”, “Next-to-Nature Baby Dolls” and “Cute Cinnamon Teddy Bears” was this ad showing a fine range of Fenton’s glassware.

On its right is the identical ad in March 1921 Butler Brothers catalogue – as you can see, the presentation is much better and clearer.​
The items are recognisable as Fenton’s Butterfly and Berry, as well as the Peacock and Grape bowl, Orange Tree (aka Fenton Flowers rose bowl), a large Grape and Cable footed bowl with a Persian Medallion interior and what appears to be a Panther footed berry (top right).

Two things caught our attention. Firstly, the difference between the wholesale price in Butler Brothers (where the cost of the assortment was averaged out at 16½ cents for each item), and the retail store prices of between 15 cents and 50 cents (presumably they were priced according to size).

Secondly, was how the “Chickasha Daily Express” ad headed up and described the items as “Embossed Glassware”. Usually, Butler Brothers and other catalogues of the era titled the Fenton and other assortments as “Iridescent Glassware” – also offering attractive titles like “New Aurora Glassware” (as in the one here). The terms used to describe and attract the buyers were generally based around the iridescent effect. The use of “Embossed Glassware” as the main heading appears to have been intended to draw attention to the (“embossed”) patterns, rather than the shimmering colours. In fact, iridescence wasn’t even mentioned in the “Chickasha Daily Express” ad. They surely missed a selling point there!
​Why Embossed?

“Embossed” in the ad is referring to the raised-up nature of the pattern – it’s also called cameo, meaning that the design stands up off the surface of the glass. The opposite is intaglio, where the pattern appears to be cut in or incised into the surface of the glass. Both cameo and intaglio designs are found on Carnival and other press-moulded glass.

​Roses in Cameo and Intaglio

A great example of a cameo pattern is Northwood’s amazing Rose Show, where the roses are raised up off the surface, almost as if they have been modelled in icing sugar and placed on top.
A Zabkowice Discovery

An astonishing discovery was featured in our Network Facebook group in late October.

Kamil Świerczyna from Poland showed us a magnificent example of Carnival Glass from Zabkowice. It is an exquisite Boar novelty (a paperweight).
Turnbull Revelations

Back in 2009 we discovered a couple of pages from a Matthew Turnbull catalogue, which enabled us to solve some long-standing mysteries as well as uncovering some fascinating fresh discoveries.​
The original few pages that we found dated from c. 1930s (we believe). In 2010, a Turnbull ad from the 1951 British Pottery Gazette came to light (thanks to Thomas Joyce) and we were able to solve more Carnival puzzles through it. All the information about this is already on our website (links at the foot of this section). And now, more revelations (courtesy Tyne & Wear Museum archive) from a 1951 catalogue, published just two years before the factory closed. We will soon be updating our website to include all the new information, but for now, let’s feature the new discoveries and get them on the NetworK record.

​We are delighted that not only do we have a maker for this seldom-seen item, but we also have the original name given to the pattern line by Turnbull. It was called Saturn. A full seven-piece fruit set was made, as well as a sugar and creamer.
Frills and Diamonds (aka Diamonds and Frills), Original Maker’s Name STANDARD (476 Range). Matthew Turnbull, England.

In our website feature on Turnbull (based on our earlier research and discoveries) the Frills and Diamonds pattern is one that we felt could be a Turnbull piece, based on various characteristics and similarities of style. Now we have the catalogue proof to confirm our belief! Here it is in the 1951 Turnbull catalogue – pattern 476 called Standard. You can see the unusual and distinctive base of these items in the images below.
Towers vase, Original Maker’s Name WINDSOR (504/T Range). Matthew Turnbull, England.
Hobstar Reversed, Original Maker’s Name GRANVILLE (495 Range). Matthew Turnbull, England.
​​This is the one item that really shook us in 2009, when we first came across the Matthew Turnbull catalogue extract pages dating from the 1930s. ​Although we have known since 2009 that this was a Turnbull item, it was a pleasure to see the illustration (complete with floral bouquet) in the 1951 catalogue as well.
​​Diamond Point basket, Original Maker’s Name HANNOVER (480 Range). Matthew Turnbull, England.

This distinctive basket, on which several different patterns can be found (Diamond Point, May Basket, Maple Leaf, Duchesse, and King George) was attributed by us back in 2009, to Matthew Turnbull’s glass works. But now we also have an illustration of it in the 1951 catalogue, and the pattern name – Hannover.
And here is a puzzle – Spears and Chevrons

Whilst all the previous patterns shown in this special research feature are confirmed attributions to Matthew Turnbull, we’ll close this with a puzzle.

This piece was featured in our NetworK Facebook group recently by Ann Sarah Mulford. Although we feel that it is possibly a Turnbull item, as yet we do not have the catalogue proof. The photos are all Copyright and courtesy of Sarah Ann Mulford.
We have only ever seen one other example of this rose bowl so clearly it is a scarce item. The pattern style, the shape, the feet and the flower block are all suggestive of Matthew Turnbull’s work – but for now, without catalogue proof, we will simply say maker not yet known. Our thanks to Sarah for enabling us to show you this intriguing item.

Further Reading
Our research in the early 2000s identified that Matthew Turnbull made Carnival Glass. Here are two links to our work on Turnbull:

Shown below, left is a Classic old Grapevine Lattice tumbler in purple, by Dugan-Diamond. It's a delightful design that sits half-way between stylised and realistic, and looks at its most magnificent on their purple base glass with an electric blue iridescence. The pitcher, also in purple, is shown on the right (courtesy of Seeck Auctions); it was mould-blown with a (non-iridised) applied handle.​
​We will be creating a L. G. Wright feature on our website in the future, that will show many of the Carnival patterns reproduced for Wright. Meanwhile, here are three links to read more about L. G. Wright reproductions in Carnival.
​Also, here is an intriguing story about Dugan: Mystery and Drama at Dugan Glass
STOP PRESS: A.A. Importing catalogue
​
We felt that readers would like to see this 1986 extract from the A.A. Importing catalogue (courtesy of Glass Paper Fanatics). There are a number of instantly recognisable items here and we hope this will help collectors. More details and illustration to follow in the next issue of NetworK. 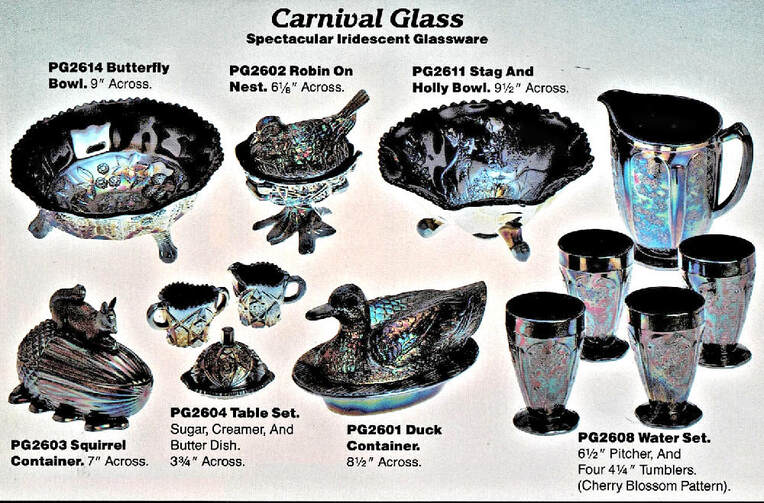 Extract from the 1986 A. A. Importing catalogue, courtesy Glass Paper Fanatics.
To see this catalogue page full sized, including several non-Carnival "Art Glass Containers", click on the image above, or go here: A.A. Importing 1986
​Privacy and the use of your information: we only use your name and email address to send you your Carnival Glass NetworK ezine. We will not share your name or email address with anyone else, or use it for any other purpose. You can change your mind about receiving your NetworK ezine at any time by clicking the unsubscribe link at the foot of every issue, or by emailing us at s.g.thistlewood@btinternet.com
​Join us on Facebook
​
We invite you and your friends to join us all on NetworK's fast growing and very active Facebook Group (link is below), and if you have missed any of the previous issues of NetworK and NetworK Specials, they are all here: Back Issues.
Copyright © 2023 by G&S Thistlewood and the individual authors and contributors where named. Protected under all applicable international laws and all rights are reserved. No image, text, or any part thereof may be copied, shared or transmitted to others without permission from the Copyright holders. Information herein may not be posted or made available, in whole or in part, on any website, social media site, FTP site, electronic bulletin board, newsgroup, or their equivalent.