Welcome to the first issue of our Carnival Network ezine for 2020. A new decade!
​Dugan and Diamond

But first, let’s begin the story in 1865, in the renowned glass-making area of Stourbridge, Worcestershire, England, when Thomas Ernest Albert Duggan (better known to Carnival collectors as Tom Dugan) was born. His cousin, Harry Northwood, was just five years old at the time: little did they know that sixteen years later, both cousins would emigrate to the USA, their futures to be inter-twined within the world of glass for many years to come.

Fast forward to 1904, and the Dugan Glass Company was established in Indiana, PA.  Tom Dugan was General Manager (Superintendent) and soon afterwards, Treasurer; his brother Alfred was factory manager while Walter Minnemeyer handled the sales side. The plant itself had previously been occupied by Northwood, and Tom used a few of Harry’s old moulds (which caused some confusion in later years) – but that’s a story for another day.

Dugan began making Carnival at roughly the same time as Northwood and Imperial, and in fact Tom had been experimenting with iridescence for several years previously. ​
​
​As in all good mystery stories, everything appears to be going well .... Tom Dugan's business was thriving. The 1911 “Crockery & Glass Journal” reported: “many improvements are being made by the Dugan Glass Co. A new blower system is being installed; also a new engine, dynamos and pumping apparatus”.
​January 1913 is when our Mystery Drama is enacted. New Year, 1913, and Thomas Dugan was on the list of banquet attendees at the Glass & Pottery Expo, held at the Fort Pitt Hotel in Pittsburgh. It was a prestige event for all the “great and the good” of the glass industry. It was also a glamorous event with women present for the very first time! As the “Crockery & Glass Journal” reported it: “The Ladies – it was the first time the gentler sex had been privileged to spend the evenings with their husbands, brothers, fathers and sweethearts, at the Western Salesmen’s Banquet - were more than welcome and indeed, they added beauty to the scene.” We even have this picture of the banquet attendees. 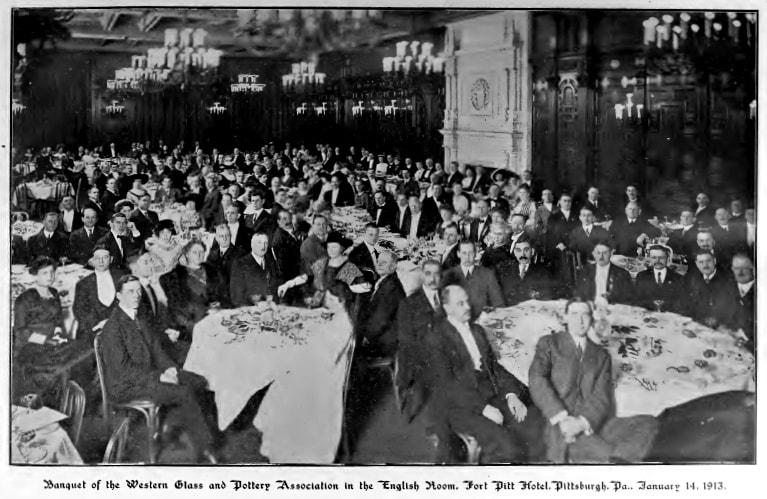 ​Somewhere in this crowd was Tom Dugan! (January 1913 “Crockery and Glass Journal”).
​The next move was the crucial one. Thomas Dugan was ordered to return home from Pittsburgh in the last week of January 1913!

​A boardroom coup whilst Tom Dugan was away?

Piecing the puzzle together, it appears that a coup had taken place. Just a few days after Dugan had rushed back home, a new General Manager was already in place. The “Glass & Crockery Journal” reported that the Dugan Glass Co. company secretary “announced a change in the management, stating that Mr Edward Rowland had been elected general manager of the company in place of Thomas Dugan and assumed charge of the plant February 3rd.”

Of course, it’s impossible to know why Tom Dugan was ousted, but clearly, he was not aware of what was going on while he was away promoting the firm at the Pittsburgh Expo. The resignation of Walter Minnemeyer and the dramatic, urgent call for William Dealing to consult with the President of the Dugan Glass Co. were all surely connected.

So, what really happened to Tom Dugan? Was he fired? Did he resign? Was he pushed? The truth is not known. Two months later it was rumoured in the glass trade press that “Thomas Dugan, formerly connected with the Dugan Glass Co., will be in New York shortly representing a crystal glass manufacturing concern”. He became involved with Cambridge Glass for a while, and then in 1914, Tom Dugan started up a new glass works, the Dugan Flint Glass Company, of Lonaconing, MD. making a general line of pressed crystal. Later he moved again, to the Hocking Glass Co., in Lancaster, Ohio. His brother, Alfred, had joined him for a while at Lonaconing, but then in 1915 he returned to Indiana, PA to work at the Diamond Glass Co.

Naturally, in such stories of intrigue, there is ... a Mysterious Figure in the Background pulling the strings. Take a closer look at the President of the Dugan Glass Co., at Indiana: the seldom-mentioned figure was the Hon. John P. Elkin, Justice of the Supreme Court of Pennsylvania. He was a lawyer, judge, businessman and government leader (from 1899 to 1903, Elkin was Attorney General of the state of Pennsylvania). He was also a neighbour of Tom Dugan’s, and an investor in the Dugan Glass Co., from its inception, when he also took on the role of President of the company.

It seems that he was also controversial, as the entry on Wikipedia suggests, stating that “he was a central figure in a scandal concerning influence buying on the Supreme Court.” However, he was undeniably popular, as it was reported that 5,000 people lined the roadway as his funeral cortege passed by in 1915. His obituary noted that “business houses, schools and industries in this place (Indiana, PA) will be closed as a tribute of respect to Justice Elkin”. Even special trains were laid on to ferry all the people who wanted to pay tribute to him. Interestingly, his role as President of the Dugan Glass Co., is not mentioned in any of the fulsome tributes, obituaries or biographies of him that we have read. Yet when he died, he was still in position as President of the company. He was succeeded in that post by J.R.R. Richards.
​In a delightful twist of fate, it turned out to be impossible to take the Dugan element out of the Diamond Glass Company! Brother Alfred Dugan returned in 1915 and took up his old position of factory manager.
​Surely the Jewelled Heart tumbler would have been a perfect choice? Such perfect timing for Valentine’s Day next month.​

We started this Issue with the boardroom manoeuvrings at Dugan, but let's finish with a tribute. Whatever was going on with the management, the workers over the years at Dugan-Diamond were going about their business making some truly great Carnival Glass. 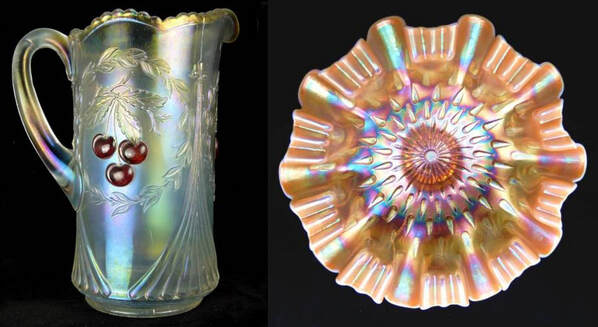 Above: a Wreathed Cherry water pitcher in white with red cherries and gilded decoration, and a peach opal Raindrops bowl.

Below: a Farmyard bowl in purple, and a Persian Garden large ice cream shaped bowl in white.

​Privacy and the use of your information: we only use your name and email address to send you your FREE Carnival Glass NetworK ezine. We will not share your name or email address with anyone else, or use it for any other purpose. You can change your mind about receiving your NetworK ezine at any time by clicking the unsubscribe link at the foot of every issue, or by emailing us at s.g.thistlewood@btinternet.com
​Join us on Facebook
​
We invite you and your friends to join us all on NetworK's fast growing and very active Facebook Group (link is below), and if you have missed any of the previous issues of NetworK and NetworK Specials, they are all here: Back Issues.
Copyright © 2023 by G&S Thistlewood and the individual authors and contributors where named. Protected under all applicable international laws and all rights are reserved. No image, text, or any part thereof may be copied, shared or transmitted to others without permission from the Copyright holders. Information herein may not be posted or made available, in whole or in part, on any website, social media site, FTP site, electronic bulletin board, newsgroup, or their equivalent.