The matching 2437 salad bowl has not yet been reported in Carnival, to the best of our knowledge. Three sizes of Drape / Floral vase were made, but only one (approx. 9.5 inches high) is known in Carnival. You can see it in black amethyst at the start of this ezine.
​
American Sets

As noted earlier, table sets were a popular item for Sowerby’s and indeed, we often see table sets from other European makers in Carnival. It’s notable that they are three-piece sets (butter sugar, creamer but no spooner) rather than the four-piece sets that the Classic Carnival makers produced.

But we discovered a fascinating fact – back in the 1880s and 1890s Sowerby’s were making what they called “American Sets” – four-piece table sets with an open spoon holder and a sugar with cover! Clearly these four-piece sets didn’t catch on in Europe, and Sowerby appear to have stopped making them, opting instead for covered butters, covered sugars and creams – omitting the spooners.
Quill

​​Dugan’s Quill is a sought-after design that was introduced by the company c. 1907 as part of their (un-iridised) “Filigree Line”. For Carnival collectors, however, it’s safe to say that the pattern had its “day in the sun” when made in purple and marigold iridised glass. It’s known only in the water set form of press moulded tumblers (below, centre) and blow-moulded pitchers (right). Note how the pitcher has extra motifs - the ovals around the top - that were omitted on the tumbler, in order to fit the design to the available space on the different shapes. The pitcher has an applied, non-iridised handle.​
​An interesting contemporary account of the Dugan glassworks in 1907, when Quill was introduced, was provided by the "New York Industrial Recorder" in which it was stated that the “Dugan Glass Co. was said to be the largest industry in Indiana.”

“The Dugan Glass Co. ... (is) an immense plant, modernly equipped, covering seven acres and connected by switches with the PRR Co. and BR&P tracks. A force of 200 skilled workmen is employed. This company manufacturers the world famous Diamond "D" crystal, colored and opalescent glassware in table, lemonade and wine sets, vases, novelties, lamps, toilet bottles, etc., and originated the celebrated "Klondyke," "Louis XV," "Pagoda," "Nester," "Victor," "Venetian," "Japanese," and other equally popular lines in intaglios and filigree work. They ship all over the world and have representatives in New York, Boston, Philadelphia, St. Louis, Baltimore, Chicago, Buffalo and London, Canada, as well as in many foreign cities. Their output amounts to about $175,000 a year.” 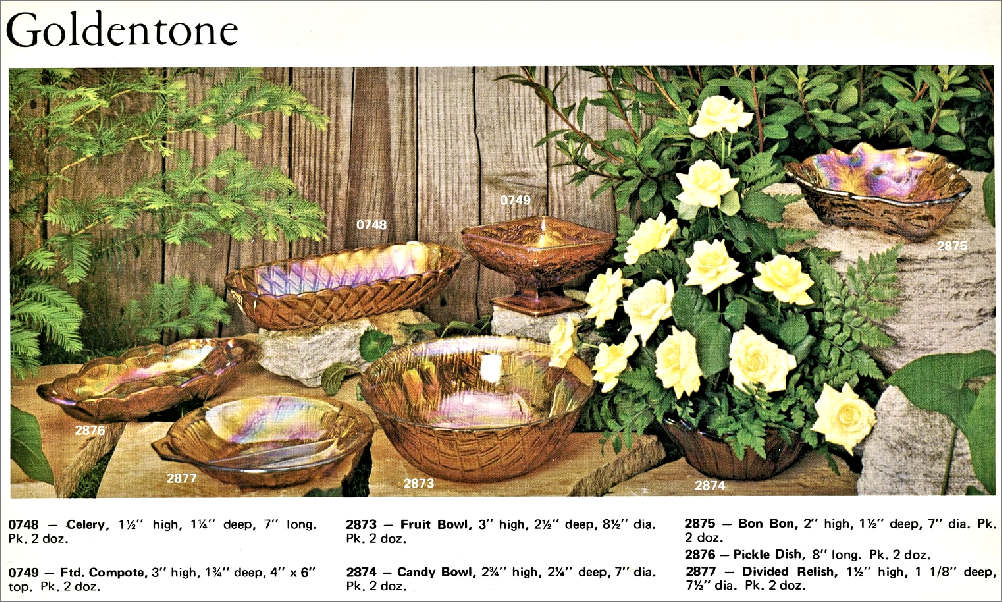 1975-76 Florist Selection Catalogue from Indiana Glass. Courtesy Craig Schenning, the Dunkirk Museum, and the Glass Paper Fanatics.
The items shown here in Indiana's 1975-76 iridescent “Goldentone” Carnival are known by familiar names, such as Lily Pons (2876) and Sunflower (2874). The Divided Relish (2877), bottom left, is commonly known as Killarney and the large Fruit Bowl (2873) is frequently called Basketweave. The two items at the back are Pretzel (the Celery 0748) and Floral and Pineapple (the Ftd. Compote 0749). The familiar 2875 Bon Bon is often called Loganberry or Strawberry Relish. Note that some of these Indiana items date back originally to the 1930s (Killarney and Lily Pons, for example), and were re-used when Indiana started making Revival Carnival Glass.

For all the answers, here’s the link: Kingfisher and Kookaburra​
​Privacy and the use of your information: we only use your name and email address to send you your Carnival Glass NetworK ezine. We will not share your name or email address with anyone else, or use it for any other purpose. You can change your mind about receiving your NetworK ezine at any time by clicking the unsubscribe link at the foot of every issue, or by emailing us at s.g.thistlewood@btinternet.com
​Join us on Facebook
​
We invite you and your friends to join us all on NetworK's fast growing and very active Facebook Group (link is below), and if you have missed any of the previous issues of NetworK and NetworK Specials, they are all here: Back Issues.
Copyright © 2022 by G&S Thistlewood and individual authors and contributors where named. Protected under all applicable international laws and all rights are reserved. No image, text, or any part thereof may be copied, shared or transmitted to others without permission from the Copyright holders. Information herein may not be posted or made available, in whole or in part, on any website, social media site, FTP site, electronic bulletin board, newsgroup, or their equivalent.