Totally Devoted to Carnival Glass
You may be interested to read our research - dating back to 1996 - on the Pepper Plant / Holly pattern here: On the Pepper Plant Trail
​​​​​Fenton Crimp
​
This experimental item (below, left) was made by Fenton for the late Howard Seufer. Grateful thanks are due to Howard’s son, Marty, for the photo of this fascinating item and permission to use it. Howard used it as a tutorial piece at one of his many educational seminars, to illustrate the different kinds of crimping carried out at Fenton in recent years.

Some of the crimping was carried out entirely by hand, relying on the skill and expert eye of the glassmaker to ensure an evenly-spaced and regular crimp. However, Fenton also used mechanical crimping tools, some of which they designed or had made to meet their specific requirements. ​
Discoveries in Brazil
​
Two charming, little marigold toothpick holders were recently found in Brazil by a friend of Claudio Deveikis. ​
​Another Esberard discovery was also made by Thiago Zanette – it is a small, oval dish and it has the maker’s name ESBERARD RIO moulded on it.​

This also appears in the Esberard catalogue, on the same page as the Leaf toothpick holder - product number 329 (shown, right), called Bloquinho.
​Eye of the Queen Whimsy

And now for a surprise! For the first time, we now see a Carnival Glass whimsy from Brazil. The familiar Eye of the Queen tumbler has been whimsied into a basket, by the addition of a handle and hand-shaping. This is a “first” and a rare item.
Congratulations to the owner, Thiago Zanette, and grateful thanks to Claudio Deviekis for bringing these fascinating items to the attention of collectors worldwide. You can see Claudio’s Blog online here: Claudio Deveikis Blog
Jeannette Revelations
​
It started as so many fortuitous discoveries do, with something completely different and “out-of-the-blue”. We saw an illustration on Fran Yorke’s FB group that didn’t have any titling or description – it caught our attention and so we contacted Fran who explained that the image was from Tom Felt. We pursued it and now, thanks to Tom Felt (MAGWV) we have access to a fascinating little booklet that was published by Jeannette Glass Co. in 1928. It turns some widely accepted facts and attributions on their heads!

It also provides information and attribution where previously there was (often incorrect) speculation. 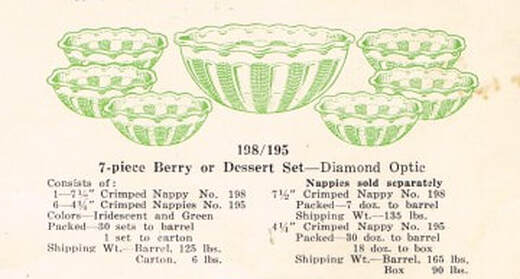 The pattern shown in the above clips will be familiar to many as Diamond Point Columns *. Usually categorised as Late or Depression Carnival Glass, this line is widely attributed to Anchor Hocking (and even Iittala in Finland … which it most certainly isn’t). None of the attributions have yet been accompanied by a catalogue image, as far as we are aware. And now here they are!

The pattern was called Diamond Optic, made by Jeannette Glass. It was made in Carnival (marigold “iridescent”) as well as green and pink (not-iridised). Here in the 1928 Jeannette booklet we see the 7-piece berry set as well as the 3-piece table set (sugar, butter and creamer) and the sherbet and plate set. So, strike out the Anchor Hocking attribution – this is a Jeannette product.

* Diamond Point Columns was actually an unfortunate choice as it is the same name, but not the same pattern, as a vase made by Fenton in Classic Carnival.

There was icing on the cake!

Not only can we firmly attribute the Diamond Point Columns (OMN Diamond Optic) to Jeannette, but also, we can solve more puzzles: this little Jeannette booklet offered up solutions to two previous and long-standing mysteries.
Above on the left, we see an auto vase that is generally known by the name Blossom and Band. In the past it has been attributed to various makers including Hazel Atlas and Dugan-Diamond. We now know for certain it was made by Jeannette in the auto vase and berry set. We also have the original maker’s name – Wild Rose.

On its right is a vase known as Prism and Daisy Band. Again we now see the original Jeannette design name for this pretty little vase – it was called Floral Ribbed. Often attributed to Imperial in the past, we now know this was made by Jeannette in the late 1920s. A full berry set was also made in the pattern.
We have a full article about Jeannette Glass Company, including larger versions of the booklet clips shown here.

This is the link: The Story of Jeannette Glass
If you have missed any of the previous issues of NetworK and NetworK Specials, they are all here: Back Issues.
​Privacy and the use of your information: we only use your name and email address to send you your FREE Carnival Glass NetworK ezine. We will not share your name or email address with anyone else, or use it for any other purpose. You can change your mind about receiving your NetworK ezine at any time by clicking the unsubscribe link at the foot of every issue, or by emailing us at s.g.thistlewood@btinternet.com
​Join us on Facebook
​
​We would love you to come and join in the fun, and we invite you and your friends to join us all on NetworK's fast growing and very active Facebook Group!
Copyright © 2023 by G&S Thistlewood and the individual authors and contributors where named. Protected under all applicable international laws and all rights are reserved. No image, text, or any part thereof may be copied, shared or transmitted to others without permission from the Copyright holders. Information herein may not be posted or made available, in whole or in part, on any website, social media site, FTP site, electronic bulletin board, newsgroup, or their equivalent.