American Iridescent Glass
​
Picture it, a century ago – a shop window full of shimmering Carnival Glass “decorated all over with rich metallic iridescent blendings, reflecting dark and golden effect, rainbow hues”. Who amongst us hasn’t imagined gathering up armfuls of Carnival from a shop like this in the early 1900s? The image below is, of course, an artist’s impression – but the shop itself (Shaw & Sons) was real, and yes, they had a window packed full of “American Iridescent Glass” that they described as “The Talk of the City”. 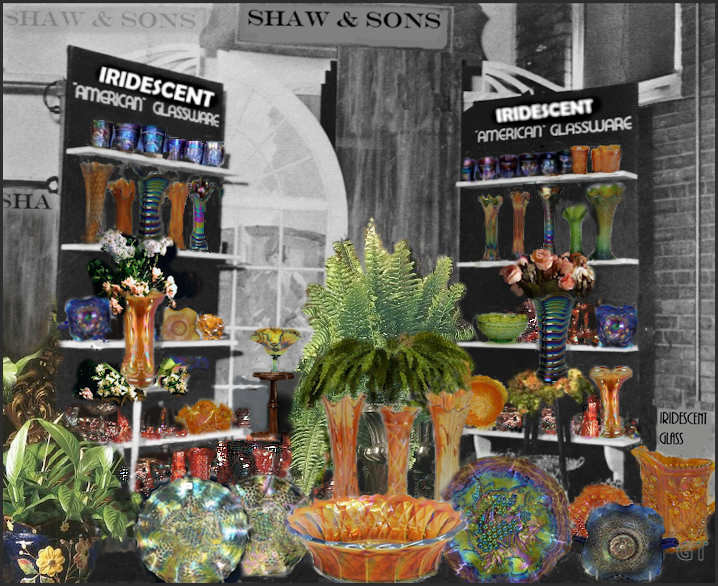 Artist’s impression of an early Carnival Glass shop window display*
“The Talk of the City”.
Around 1910, the United States became a net exporter of manufactured goods and International markets beckoned. Australia was a major importer of table and ornamental glassware in 1911, as their own glass industry was in its infancy and was not yet capable of supplying the growing demand of the home market. The way was clear for Carnival Glass – glorious, shimmering, decorative tableware – not only useful but also fabulous to look at.

"Bright and Cheerful without being Gaudy"

Meanwhile, on the other side of the world, just over a year earlier in late 1909, the first shipments of Carnival Glass had been imported into Britain by the agent, Charles Pratt. These were described in the “British Pottery Gazette” as containing glass in “a number of art forms and fancy shapes suitable for presents” and were almost certainly Fenton items. The description went on to describe what we know as Carnival … “the coloured examples are bright and cheerful without being gaudy, while some bowls and other pieces in golden iridescence and in green iridescence, are very effective. Vases and art shapes are shown treated this way.” Charles Pratt was an agent for Fenton, while another agent – Markt & Co. – represented Imperial. And thanks to the reports and ads of the time, we know exactly what Imperial pieces were being imported into Britain. 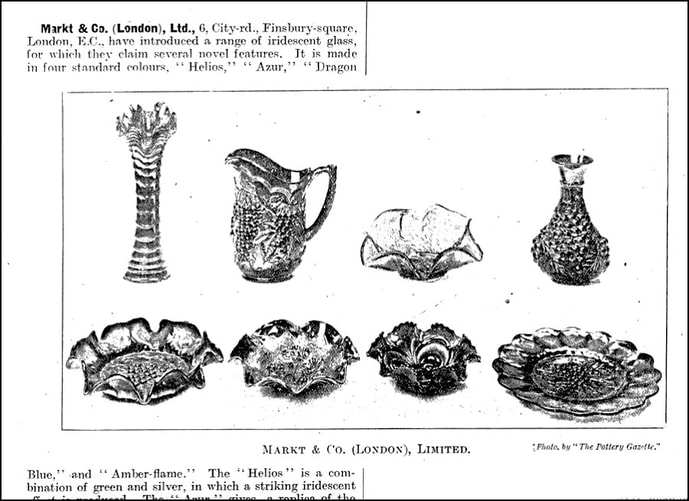 Extract from British “Pottery Gazette”, March 1911, Agents Reports.
​The amazing archive image above from 108 years ago features a photo of the Carnival Glass that Markt & Co. were offering to the trade. The pieces are all from Imperial and are (top row first, left to right): Ripple vase, Imperial Grape pitcher, Acanthus bowl. Imperial Grape vase (often referred to as a carafe today), Heavy Grape bowl, Pansy bowl, Scroll Embossed bowl and Heavy Grape plate. The grape designs, despite being given two different pattern names by today’s collectors, were almost certainly intended to be part of the same extended line by Imperial.

Of particular interest are the “four standard colours” that the glass was reported to be made in: Helios, Azur, Dragon Blue and Amber-flame. There’s a curious mismatch here to the four colours that were listed by Imperial’s USA agent in 1911, which are shown here: Imperial Glass Ads.

Our suspicion is that the “colours” described by the British agent, Markt & Co., were actually the perceived iridescent effects rather than the actual base glass colours. Helios is straightforward (green base glass with silver or gold iridescence), amber-flame is probably amber base glass, while the azur is most likely purple base glass. But why no mention of marigold (rubigold) … or perhaps that was also included in their descriptive term “amber-flame”?

​​And what on earth was Dragon Blue?
Several Markt & Co. ads for Imperial’s “Iridescent Ware” were featured in the British “Pottery Gazette” later in 1911, and again in 1912. The final one, titled “Our Xmas Offer” appeared in November 1913, as war in Europe loomed on the horizon. International markets were disrupted throughout the years of WWI and it wasn’t until the early 1920s that ads for “Iridescent Ware” appeared again.

We’ll share some of these amazing ads with you in the November issue of NetworK.​
Celeste Blue Orange Tree.

​An astonishing discovery was reported to our Carnival NetworK Group on Facebook on September 23rd – and we are delighted to have permission to share it with you all here. ​The owners of this beautiful Orange Tree water pitcher in glorious celeste blue, are Richard Young and Donnie Hazelrigs.​
​Fenton’s Orange Tree is a superb pattern (probably inspired by William Morris’s designs featuring this motif in the 1880s and 1890s), and it had a long and popular production span. It first appeared in trade ads around 1912 through to the late 1920s. Celeste blue Carnival was produced by Fenton in the early 1920s, at the same time as red Carnival. Both were made in very limited numbers, and are sought after for their rarity as well as their beauty.

There is much more about Fenton's Orange Tree pattern and celeste blue elsewhere on the website. Here are two links for further reading.

​Josef Inwald’s glass empire had its beginnings in 1884 – it would grow to six premises across Bohemia, producing and marketing a wide range of glass.  The location that is of the greatest interest to Carnival collectors is Rudolfova Hut at Teplice, in Czechoslovakia, which is where some of the most beautiful and artistic Carnival Glass was created, thanks to a combination of high-quality production standards and a master glass designer called Rudolf Schrotter.
​* This is an artist’s impression of what a shop window display full of Carnival Glass might have looked like, back in 1911.

​The items featured in the artwork are representative of the patterns, shapes and colours that would have been available at that time. The shop – Shaw & Sons – was an actual retail establishment in Brisbane, Australia, that sold Carnival. However, the illustration is not intended to depict that actual store, it is simply an artist’s rendition and the appearance is, of course, conjecture.
​Privacy and the use of your information: we only use your name and email address to send you your FREE Carnival Glass NetworK ezine. We will not share your name or email address with anyone else, or use it for any other purpose. You can change your mind about receiving your NetworK ezine at any time by clicking the unsubscribe link at the foot of every issue, or by emailing us at s.g.thistlewood@btinternet.com
​Join us on Facebook
​
We invite you and your friends to join us all on NetworK's fast growing and very active Facebook Group (link is below), and if you have missed any of the previous issues of NetworK and NetworK Specials, they are all here: Back Issues.
Copyright © 2023 by G&S Thistlewood and the individual authors and contributors where named. Protected under all applicable international laws and all rights are reserved. No image, text, or any part thereof may be copied, shared or transmitted to others without permission from the Copyright holders. Information herein may not be posted or made available, in whole or in part, on any website, social media site, FTP site, electronic bulletin board, newsgroup, or their equivalent.