Totally devoted to Carnival Glass
​
​They didn’t have black lights back in the 1800s ... but ... the phenomenon of fluorescence was actually discovered in 1852. You might be shocked to learn that they knew all about the vivid yellow-green fluorescence, and they could experience it for themselves - the magic trick that enabled them to see the fluorescent glow was the Electric Arc Lamp.
​The Hattie pattern seems to have been drawn up using mathematical instruments. But recently we realised there is surely more to the design than the use of a compass and protractor. Browsing through Imperial catalogue 101 B (c. 1915-1916) we spotted the Hattie plate, and here’s the interesting part … it was described as “10 inch round plate, mosaic pattern”.

Mosaic! That had never occurred to us, so the search was now to find what might have inspired the Hattie pattern.
​We’ve often felt it could be a Crown Crystal (Australia) product, but the exact item has not been seen in any makers’ catalogue. Its appearance in a 1925 Australian ad provides a time line, and suggests we could indeed by looking at Crown Crystal as the maker.

We are aware of this little basin in marigold too, and with a matching lid (and un-iridised finial). So far they have not been named, so we’ll take a lead from the 1925 ad that described them as “Dainty Sugar Basins”. We hereby name this delightful pattern “Dainty”.
​There Be Dragons!
​Finally

We close with Fenton in our hearts, for 2017 was the year that saw the final and sad demise of Fenton Art Glass.

​We are deeply grateful to the late Frank Fenton, the late Howard Seufer and to Howard’s son, Marty Seufer, for keeping alive the genius, the creativity and the generosity that was embodied in the history of the company. 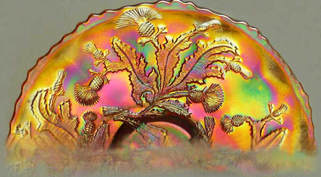 ​Join us on Facebook
​
We invite you and your friends to join us all on NetworK's fast growing and very active Facebook Group (link is below), and if you have missed any of the previous issues of NetworK and NetworK Specials, they are all here: Back Issues.
Copyright © 2023 by G&S Thistlewood and the individual authors and contributors where named. Protected under all applicable international laws and all rights are reserved. No image, text, or any part thereof may be copied, shared or transmitted to others without permission from the Copyright holders. Information herein may not be posted or made available, in whole or in part, on any website, social media site, FTP site, electronic bulletin board, newsgroup, or their equivalent.