Welcome to the third issue of Carnival Glass NetworK. Also, welcome to the very many new readers who signed up recently! If you missed Issue #1 or #2, you can read them on the NetworK Back Issues.

Curiously, the ad describes the bowl as being “eight inches across” when in fact these bowl usually run to over nine inches (often ten). Note too, that the ruffled shape is described as having “bent edges” and the sketch appears to show seven ruffles. Typically the Little Flowers large bowls have six or eight ruffles, so we assume the odd number was simply artistic licence.
Mary Ann
The modern reproductions

Like a number of Classic Dugan-Diamond Carnival Glass patterns, the Mary Ann vase has been reproduced in contemporary Carnival, and also, like the Classic versions, they are not marked with the maker's name. They are called Mary Dugan vases, made by Mosser Glass. The ones we have seen have 10 scallops around both the top and the foot and they have 2 mould seams.

How to tell the old from the new – look at the base.
If the base is iridised underneath (above left), it is a reproduction. The Classic Mary Ann vases are not iridised under the base (above right).

It takes some experience to be certain, but most Carnival collectors will spot the distinctive, rather vivid and brash iridescence on the reproductions, particularly if the two are side-by-side, as below.
Encore!

Encore (meaning “more … more!”) was the clever title of three reference books, “Encore by Dorothy Taylor” Books I, II and III, produced between 1984 and 1986. There was also a long-running subscription based “Encore” newsletter, issued from 1975 to 1993.

Dorothy Taylor’s focus was to identify and document the many Carnival Glass reissues and reproductions that were being made at that time by the likes of Fenton, Imperial, L E Smith, Westmoreland, and other makers, and also L. G. Wright which commissioned glass companies to make Carnival for them.

Dorothy Taylor also commissioned many Carnival Glass pieces to be made as souvenirs and collectible exclusives, including her “mini baskets” series.

The handles were applied by hand (not part of the mould), in various styles and shapes. As was the practice at Fenton, the glassmaker who applied the handle impressed his own “mark” on the handle at the point where it was attached to the body of the glass. The mark on the Elk mini basket is Fred Bruce. 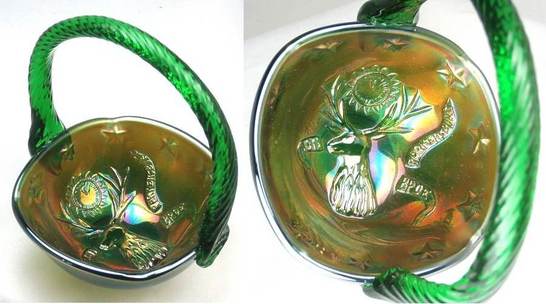 Elk mini basket (#4 in the series)
The mini basket plungers were also used to make other items, for example miniature bowls and an umbrella shape (with a single crook-shaped handle attached to the centre of the bowl). Dorothy Taylor also had several other items made for her and Encore, generally with the same theme - her interpretation of Classic Carnival designs. They include miniature water sets – God and Home, Inverted Peacocks and Inverted Trout – and miniature punch sets.

B.P.O.E. (the Benevolent and Protective Order of Elks) is a US fraternal order and social club dating back to 1868. The elk design was the inspiration for several Classic Carnival Glass items made by Fenton, Dugan and Millersburg - they are very collectible and some are very rare. The same design also inspired Dorothy Taylor's mini basket and other contemporary Carnival Glass pieces.

We have a major 4-page feature on BPOE Elks Carnival Glass - The Story Behind The Glass. 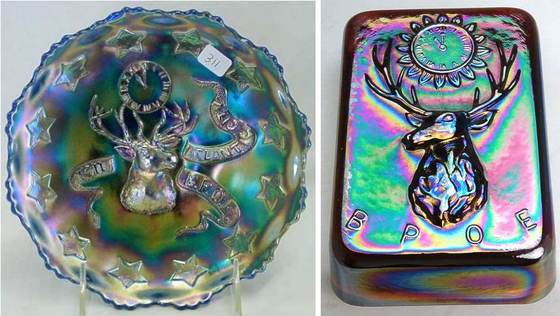 Above left, a Classic BPOE Elks Atlantic City 1911 bowl in blue, made by Fenton. Courtesy of Seeck Auctions.
On the right is a contemporary red Elks paperweight made for Mi Mi Inc. It is a reproduction
of an original, rare item made by Millersburg (which was only made in purple and green Carnival).
Read more about Dorothy Taylor’s mini baskets, including all of the designs, and a list of the numbers and colours of the designs that were made. Here is the link: Encore Mini Baskets.

Too Much Beer (the drunken glassworkers story)

The Imperial Tiger Lily tumbler on the right has a distinct lean to it. The explanation usually given is that the glass was too hot when the tumbler was set down in the lehr to cool, and it slumped slightly. That's the most likely reason ... but maybe, just maybe, alcoholic fermentation might have played a part!

Interesting fact - brewing of ale in the USA was first recorded in Virginia in 1587.
Feedback

We hope you have enjoyed this issue of our NetworK ezine. We aim to bring the next one out very soon. If you missed earlier issues, they are on our NetworK back issues page. Meanwhile, we would love to hear from you, and maybe you would like to "chat" with us on our Carnival Glass facebook pages.
​Read more issues of NetworK
Copyright © 2023 by G&S Thistlewood and the individual authors and contributors where named. Protected under all applicable international laws and all rights are reserved. No image, text, or any part thereof may be copied, shared or transmitted to others without permission from the Copyright holders. Information herein may not be posted or made available, in whole or in part, on any website, social media site, FTP site, electronic bulletin board, newsgroup, or their equivalent.