​“BOGOF” is perhaps an unusual way to greet all our Carnival Glass friends to this edition of NetworK. But of course we mean the sales technique, “Buy One Get One Free”.

Some years ago, we began to look into a very under-investigated area of collecting that really fascinated us: how Carnival Glass makers such as Imperial, Fenton or Northwood promoted and sold their glass at the time they were actually making it.

In 2004, we were asked to write an article for Martha Stewart’s “Living” magazine about the role that Carnival Glass played in the decorative styles of the day. Subsequently, we developed this into a unique way of appreciating Carnival Glass and looking at its provenance through the authentic old ads, the newspaper reports, and the catalogue / promotional material being used at the time the glass was being made.

In this issue of NetworK and on our website, we bring you a taste of those early days of Carnival. Much of the information in these features cannot be seen anywhere else – you’ll find the website links at the foot of this NetworK.

​Avid coupon clippers would have taken their coupons to the Lefstein & Rosenfeld furniture store on Broadway in Brooklyn (NY) and been rewarded with the magnificent, Northwood, Singing Birds set for your 49 cents (photo courtesy of Seeck Auctions).

Or maybe a Singing Birds water set was more to your taste!​
​​
​It’s not easy to appreciate what life was really like a century ago, before the internet and TV, but our research into contemporaneous advertising methods will certainly help your imagination!
​What a Bargain!

You know how it is today … an expensive “designer” outfit gets copied and soon you see affordable versions of it everywhere. That’s exactly what happened with Carnival. The exclusive, iridescent blown “Art Glass” (such as from Tiffany) that was an expensive luxury item back in the early 1900s was copied in the form of pressed glass that was much cheaper to produce. This beautifully illustrated 1910 ad from the “San Francisco Call” offers “an exact reproduction of a high priced Tiffany” vase. ​No obfuscation – they called it exactly as it was – a Tiffany reproduction!
​Buying the Glass

Mail Order catalogues back then were very big business. In the Sears Roebuck 1912 catalogue you could have gotten anything from fancy hats and jewellery, bedbug exterminator and liquid skin (for cuts) to wagons, cars and houses. Plus just about everything else in between and that included Carnival Glass.

Smaller companies too, like Lee Manufacturing, as well as the big boys such as Montgomery Ward in the USA and Foy & Gibson in Australia, all promoted and sold Carnival or offered it as premiums (gifts). The magnificent full colour image below, is from Lee Manufacturing's 1915 catalogue. 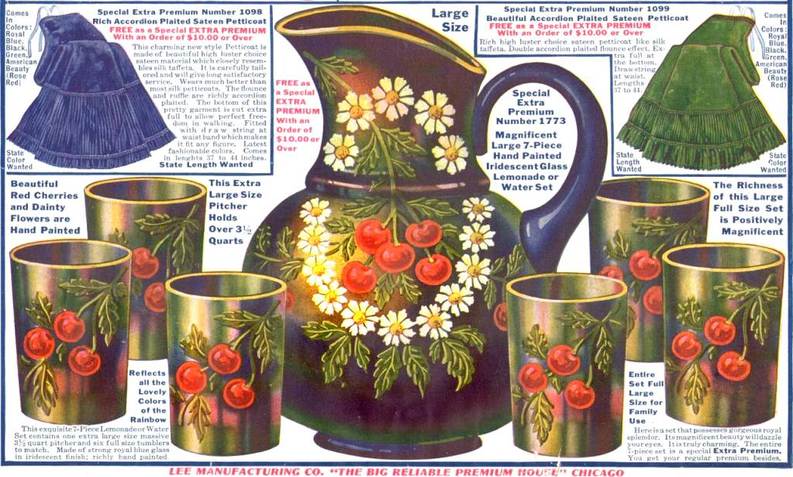 We hope you have enjoyed this taste of how it was back in those early days when Carnival was being made.

If you want to explore this further, then "Sell it to me" is one of the special Feature Sections to be found on our website in our unique Carnival Glass Times.

It's packed with illustrations, insights and a huge amount of information that cannot be seen anywhere else.

Discover more by following these links:

Sell it to me - main page with lots of links to ads and features.

Glass For Its Time - discover what inspired the birth of Carnival.

Read All About It! - the title says it all.
​
​Read more issues of NetworK
Copyright © 2023 by G&S Thistlewood and the individual authors and contributors where named. Protected under all applicable international laws and all rights are reserved. No image, text, or any part thereof may be copied, shared or transmitted to others without permission from the Copyright holders. Information herein may not be posted or made available, in whole or in part, on any website, social media site, FTP site, electronic bulletin board, newsgroup, or their equivalent.