Grape and grapevine designs from the Home Needlework Magazine, 1909
On the grapevine

"As a motif for dining room decoration there is nothing more desirable than the grape, and just now it is quite the fad." So said the Home Needlework Magazine in 1909, with this image to show how to decorate your dining room with a stencilled grape frieze.

Carnival Glass makers were quick to take advantage of "the fad". All the "Big Five" Carnival makers in the USA had patterns that featured grapes and grapevines (such as Northwood's magnificent purple Grape and Cable punch set shown below, right), and these motifs were also in popular use all around the world.​
Northwood's Grape and Cable

Northwood’s very popular Grape and Cable pattern has always been thought to have been introduced in 1910.

Heacock, Measell and Wiggins based this on the fact that they had seen advertising dated early 1910, and so they assumed that the pattern had made its debut at the glass exhibition in Pittsburgh in 1910. This idea has prevailed, and 1910 is currently said to be the year in which Northwood’s famous Grape and Cable was introduced.

But it’s not so! We now overturn previous thinking and prove that in fact, Northwood’s Grape and Cable was introduced the previous year, in 1909, as confirmed by the ad, below, in the Chicago Sunday Tribune: the ad is from November 21st. 1909 and it features a Golden Iris (marigold) Grape and Cable punch set. As it was being sold in the basement of the Boston Store on Madison Street in Chicago (perfect for Thanksgiving and then Christmas sales) we would expect that there was a reasonable lead in time up to that, and it’s likely that the punch sets were actually introduced to the trade several months earlier, at the very least. 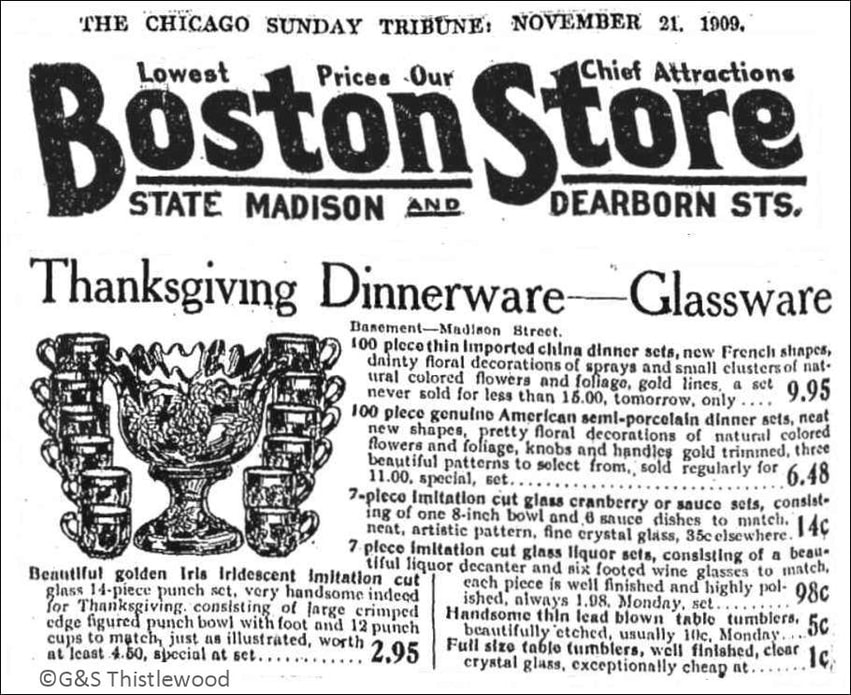 Above: Country Kitchen is the exterior pattern paired with Fleur de Lys on this green ten inch bowl.
Update on Persian Medallion (NetworK #9)

Sincere thanks to Joan Doty for letting us know that a few rare examples of the Classic Persian Medallion 9 inch plate are reported with a Bearded Berry exterior (and some scarce bowls too). If you have an example, please send us a photo so that we can feature it. For a final check, on the plates, note that the edge of the Classic examples also has a gentle scalloped effect - the contemporary plates do not have this undulating edge.

We received this delightful feedback on NetworK 9 from Jerry and Carol Curtis. “We just received your latest article "A Stitch in Time". I enjoyed it so much and had never given any thought to what you suggested about the intricacy of some patterns; but now it becomes a logical explanation. I do recall how my mother worked tediously sewing, crocheting, etc. on making doilies and whatever for the home; a labor of love that is probably forgotten in most homes now-a-days

Missed any issues of NetworK? They are on our Back Issues page.

​Read more issues of NetworK
Copyright © 2023 by G&S Thistlewood and the individual authors and contributors where named. Protected under all applicable international laws and all rights are reserved. No image, text, or any part thereof may be copied, shared or transmitted to others without permission from the Copyright holders. Information herein may not be posted or made available, in whole or in part, on any website, social media site, FTP site, electronic bulletin board, newsgroup, or their equivalent.