Blast from the Past: Marion Hartung's Column, April 1972

The article below was written by Marion Hartung who had a regular column in The Mid-America Reporter newspaper.

​With grateful thanks to Ray Steele. Copyright Glen & Stephen Thistlewood. 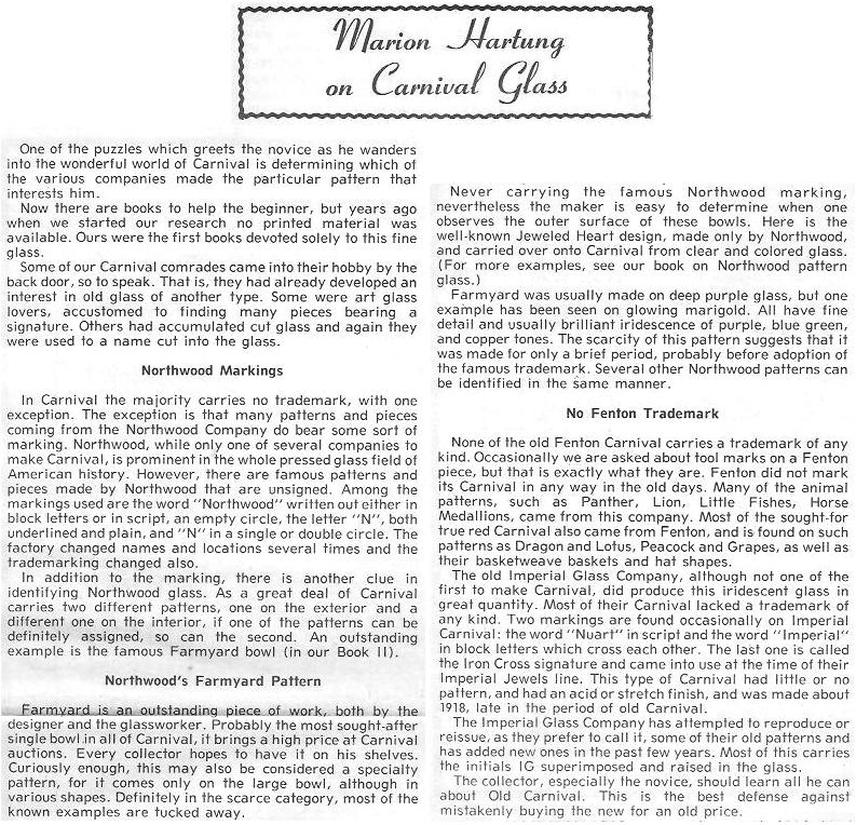 2. Some versions of the N mark were used on Contemporary Carnival by L.G.Wright, but later discontinued.

3. Mrs Hartung wrote that Imperial was "not one of the first to make Carnival". Our recent research, however, indicates that Imperial were much earlier than had been originally thought - as we have an ad dated July 1908, that proves they were making Carnival at that time.

4. The Farmyard pattern: Mrs Hartung used the exterior or back pattern to help to identify the maker. At the time she was writing, it was believed that Northwood was the maker of the Farmyard bowl and thus the Jeweled Heart back pattern also. The so-called "Dugan dig" in 1981 revealed that Dugan was the actual maker of the Jeweled Heart and Farmyard patterns (and indeed many others).

For the Classic Carnival Farmyard bowls, we can now add that one example is known in peach opal, and three in green.

Farmyard has also been made in Contemporary Carnival in many colours, by Fenton for MIMI and for Singleton Bailey. In the early 1970s, Richard ‘Chuck’ Stone and his wife Mimi (this was the name that her grandchildren called her) had a new Farmyard mould made for them by Al Botson (of Botson’s Machine and Mould Company, Cambridge, Ohio), and the glass was pressed by Fenton. They are marked MIMI on the base. MIMI pieces were only made for a short time.

The MIMI mould was later bought by Singleton Bailey who also had Contemporary Farmyard pieces made from it by Fenton. They are marked DBS.

Back to Marion Hartung - Carnival Glass Pioneer
Copyright © 2023 by G&S Thistlewood and the individual authors and contributors where named. Protected under all applicable international laws and all rights are reserved. No image, text, or any part thereof may be copied, shared or transmitted to others without permission from the Copyright holders. Information herein may not be posted or made available, in whole or in part, on any website, social media site, FTP site, electronic bulletin board, newsgroup, or their equivalent.