We have had this advert for a number of years - it was included in a large volume of documents sent to us ​by our dear friend, (the late) Bob Smith. Bob had come across it in the Boston City Library, and we put it in our (printed) Carnival Glass NetworK magazine #16 in 1997.

It is one of those frustrating sort of ads that tells you quite a lot, but teasingly leaves you with more questions, which were answered when Mary Pedano posted pictures in our Carnival Glass NetworK Group on Facebook.

​This ad is from September 1965. Well over half a century ago, but it feels like only "Yesterday": The Beatles had just completed their USA and Canada Tour, and had released their album "Help", and Brockway Glass Wholesaler was promoting a big sales push of their Prescription Ware in the retail Druggist stores. 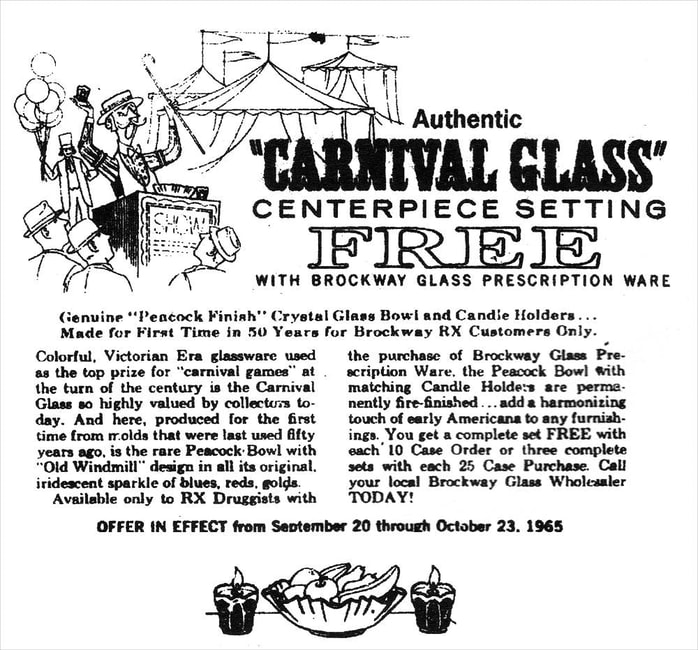 What do we know from the ad?

It shows that the use of the term "Carnival Glass" was sufficiently well established in the language of advertising, without the need to give a very detailed explanation about what it was. It also shows that Carnival Glass was sufficiently well regarded as to be offered as a sales premium to incentivise Brockway's retail customers to buy more of Brockway's pharmaceutical glass products. The offer - a FREE "Authentic Carnival Glass Centerpiece Setting" with every 10 cases of Brockway's prescription glassware, or THREE SETS with each 25 cases.

What does the ad not tell us?

It tells us neither the name of the glass factory supplying the Carnival Glass to Brockway, nor the actual patterns of the pieces on offer. There are some clues as to the patterns, but there is also some confusion. We read "Peacock Finish", "the rare Peacock Bowl", the "Old Windmill" design and the "matching Candle Holders". We can speculate what all this means ... but it remained just that, speculation. The black and white illustration at the bottom of the ad most certainly did not provide any assistance in identifying the glass, the pattern, or the maker!

But speculate no more!

Thanks to Mary Pedano's post and pictures, we have the answer! Here are Mary's pictures of the Brockway offer, complete with its original box, and the three pieces of Contemporary Carnival Glass it contained.
​Thanks to Mary, we now know that the offer was for Imperial glass - their reissued Windmill bowl in smoke, and with it were two Octagon toothpick holders that were actually marketed with the bowl as candleholders.

The "clues" make sense now. the "Peacock bowl" did not refer to the pattern, but in fact it was describing the colour of the glass and its iridescent finish: Imperial's term for their smoke Carnival was "peacock iridescence". The so-called "matching Candle Holders" did not matching in the way that today's collectors would see it (as matching in pattern), but rather, they were matching in colour.

The "Old Windmill" design was perhaps the best clue to Imperial, and "thinking outside of the box" (as it were) the advertising campaign that was being conducted at exactly the same time in 1965, would have clinched it. In our article, Imperial's Contemporary Revival, we show one of Imperial's catalogues from that time along with several ads for what they had on offer - all described under the headline of "Carnival Glass".
Copyright © 2023 by G&S Thistlewood and the individual authors and contributors where named. Protected under all applicable international laws and all rights are reserved. No image, text, or any part thereof may be copied, shared or transmitted to others without permission from the Copyright holders. Information herein may not be posted or made available, in whole or in part, on any website, social media site, FTP site, electronic bulletin board, newsgroup, or their equivalent.