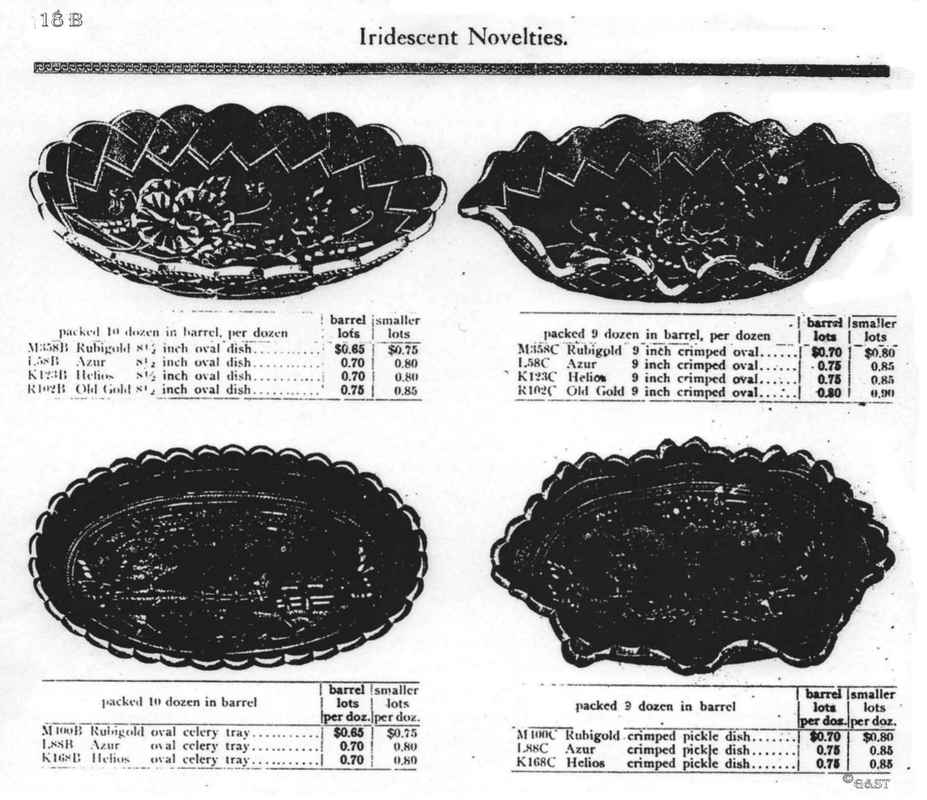 ​Catalogue illustration from Imperial’s 101B, c.1915
The shapes shown here are often described as pickle dishes, dresser trays and so on. But what did the maker intend them to be, and are we giving them the right terms/descriptions? The illustration is from Imperial’s catalogue 101B, c. 1915, showing two Pansy shapes at the top and two Windmill shapes below.

Why? Probably just to give a sense of multi-use, and to increase their sales potential by suggesting the sort of use for a particular item - in short,  whatever made it sell!

The smoke Pansy piece shown above is also sometimes called a "dresser tray", but the shapes that Imperial made the Pansy pattern were all for use as domestic tableware: plate, bowl, sugar, creamer, handled nappy, pickle and celery. Imperial did not make a dresser set in the Pansy pattern.
What About Other Makers?

Our research into Carnival Glass made in Europe (and elsewhere around the world outside of the USA) has given rise to a whole new set of reference points for the description of shape. Here are just two examples from the German maker, Brockwitz.

On the left is a lidded piece. The pattern is Patricia, and it's a pickle jar. On the right is a pattern called Leaf - the piece looks like a celery, and most likely was used as such, but it's catalogue description was a "Gurkenschale", a dish for gherkins!
Copyright © 2023 by G&S Thistlewood and the individual authors and contributors where named. Protected under all applicable international laws and all rights are reserved. No image, text, or any part thereof may be copied, shared or transmitted to others without permission from the Copyright holders. Information herein may not be posted or made available, in whole or in part, on any website, social media site, FTP site, electronic bulletin board, newsgroup, or their equivalent.