The splendid geometric pattern is Omnibus, named by Heacock and Bickenheuser. The pattern was introduced by United States Glass in 1911 as their #15124 pattern (below, left). Interestingly, the pattern also featured in their 1915 catalogue for Mexico and South America.

​We have been interested in this pattern since 1996, when a blue Carnival Glass Omnibus pitcher was found in the UK. A few years later we were intrigued to see, in a showcase at Renningers Antique Center (in Pennsylvania, USA), the water set that is pictured above, left.
There is a conundrum.

Many of the “finds” of Omnibus Carnival Glass pieces have been in South America, which begs the question of whether they were exported there (promoted in the US Glass 1915 Mexican-South American catalogue) or were they actually made there?

The answer, based on current evidence, is likely to be “yes” to both questions. Some were exported and some were probably made there (possibly copied and extended by a South American maker). Research in ongoing ...

We have documented a number of other USA-South America connections, for example for Rising Sun and Imperial patterns, and no doubt there is more to be discovered about the connections between Carnival Glass production in these two continents.

Below is a Butler Brothers ad from February 1911. It shows the range of shapes in the Omnibus pattern that US Glass was making in crystal at that time. To date, the only shapes reported in Carnival Glass are the pitcher (with both shapes of top) and tumbler. 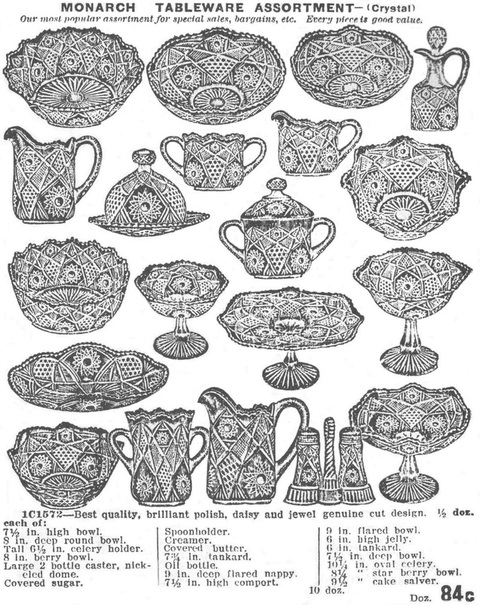 Butler Brothers, February 1911 showing a selection of US Glass Omnibus items in crystal
Butler Brothers catalogue extracts are courtesy of, and with sincere thanks to the dedication of (the late) Dean and Diane Fry and the Southern California and San Diego Carnival Glass Club in sourcing and preserving these catalogues.
Copyright © 2023 by G&S Thistlewood and the individual authors and contributors where named. Protected under all applicable international laws and all rights are reserved. No image, text, or any part thereof may be copied, shared or transmitted to others without permission from the Copyright holders. Information herein may not be posted or made available, in whole or in part, on any website, social media site, FTP site, electronic bulletin board, newsgroup, or their equivalent.