For some considerable time, we have been trying to track down any other contemporaneous use of the term "Alaskan", but as far as we can ascertain this Sommers & Co. wholesale catalogue is the only source. In recent discussions (2019) in a Facebook group about this same topic, the highly respected Northwood researcher and author, Dr. James Measell stated that the term does not have a basis in Northwood’s history.
This would suggest that if "Alaskan" had a claim to be an original term used to describe the bronze/amber/marigold effect on green glass, then "Bohemian" could have a similar claim! In reality, all kinds of promotional names were used by the wholesalers to describe their iridescent assortments – all designed to attract the customer and make them spend, spend, spend. Here are just a few from 1909 and 1910: Golden Sunset Iridescent Assortment, Bohemian Iridescent Novelty Assortment, Pompeiian Iridescent Assortment, Regal Metallic, Exposition Metallic Assortment, Parisian Art Assortment and Venetian Art Assortment. An earlier 1908 assortment (not iridescent) was even called “Klondyke Gold”. 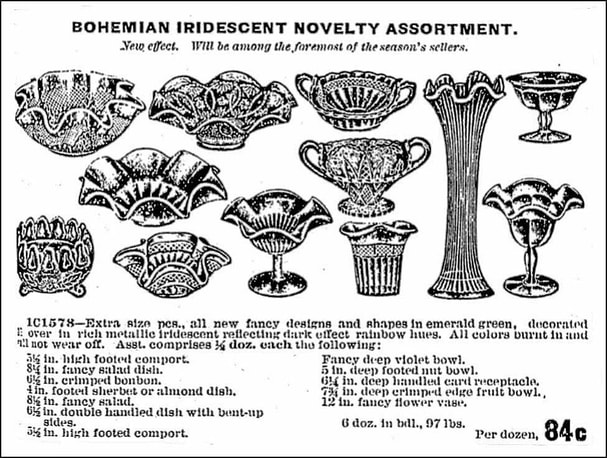 ​Above: an extract from the 1909 Butler Brothers Catalogue.
The patterns and shapes were similar to the ones shown in the 1909 Sommers & Co. catalogue, and the glass was also described as green.
​Lustre Flute, Panelled Holly, Wild Rose and the Fine Rib vase are all easily identified.
​What did those “three new finishes” look like?

​Shown below is Northwood’s Wild Rose pattern in what we believe are “the three new finishes in iridescent glass – ‘Golden Iris’, ‘Pomona’ and ‘Florentine’ “. All pictures, courtesy of Seeck Auctions.
Copyright © 2023 by G&S Thistlewood and the individual authors and contributors where named. Protected under all applicable international laws and all rights are reserved. No image, text, or any part thereof may be copied, shared or transmitted to others without permission from the Copyright holders. Information herein may not be posted or made available, in whole or in part, on any website, social media site, FTP site, electronic bulletin board, newsgroup, or their equivalent.