​Welcome to the August edition of Carnival Glass NetworK. In this issue we look at some fascinating vases that you may not be familiar with – and we delve further into the topic of Reproductions, with some surprises!

Rib and Flute
An unusual vase was recently posted by Debi Bush in our Carnival NetworK Facebook group (see pictures below, courtesy of Debi). Glen identified it as a seldom seen Rib and Flute vase, made by Dugan-Diamond, and Debi kindly agreed we could include here in NetworK.

​“Who made this seldom-seen vase? Actually, there were two different moulds for the Rib and Flute vases. One has a 32-point star in the Dugan marie, which means that mould was made by Dugan, although I suspect the marigold examples with iridescence only on the top half or so, were produced by Diamond.

The other mould has a 30-point star on its flat base, which is a Diamond mould. The shade of amethyst seen in these vases is very definitely a Diamond color.” Note that the base of Debi's vase has the 30-point star that Joan describes above.​
The first reported example of “Falling Stars” was by Frances and John Hodgson – these are rare vases and we had felt fortunate indeed to subsequently find one for ourselves. They are 11 inches tall and heavy, and are shown in Riihimaki’s catalogue. The main motifs are identical on both the small blue vase and the taller marigold “Falling Stars” – the pattern variations can be accounted for by the difference in size. We discussed this with the Hodgsons, who agreed with us.

* Note: in our 2019 Encyclopedia entry on “Hazel” we clearly stated that “the maker is not confirmed” and further noted that it was not shown in any catalogue we had studied. We conjectured that the maker was possibly Hovmantorps, but no attribution was given. However, please be aware that some web pages have taken our cautious information (without reference to source or context) and given a firm assertion that Hazel is a definite Hovmantorps item.​
​Reissues, Reproductions and Fakes – further investigation

​The original, Classic Carnival Dahlia pattern was made by Dugan. To the best of our knowledge, it doesn’t appear in any of the Butler Bros catalogues, but we see its forerunner here in this extract from Dugan’s 1907 catalogue. ​​The very distinctive shape of the water set is the same as Dahlia – and all the pattern details around the edges and the vertical panels are the same – all that’s missing is that big dahlia flower.
​Fast forward to the late 1930s, just under a decade after the devastating fire that had destroyed the Dugan-Diamond glass factory, Si Wright (who established the wholesale glass firm, L.G. Wright) acquired a number of old moulds that came from Dugan-Diamond.
​Lattice and Daisy

​Many collectors are unaware, however, that Lattice and Daisy has been reproduced in the large bowl and chop plate shapes. These reproductions have confused many, including experienced and knowledgeable people.
The Rosso ad above, left, is from November 2000 – the pieces shown are reproductions of (Dugan) Diamond’s Lattice and Daisy. The colours noted in the ad are jade and green opalescent, which are not iridised, but we have also seen these bowls in Carnival - in red, vaseline and deep orange / marigold - in unruffled form as well as round and cupped-in shapes. A 12 inch chop plate is also known in red; the pattern is all exterior, the inside is plain, and it has a many rayed star on the marie/collar base.

We believe they were made by Mosser for Rosso. It seems possible that they were made using the old mould. Interestingly, the Lattice and Daisy small berry bowl mould was listed in the records at Fenton, and identified as the Dugan-Diamond mould purchased by Fenton in the L.G. Wright mould sale. There is, as yet, no evidence that Fenton actually put this mould into production - or indeed that they had any of the other Lattice and Daisy moulds.
Imperial Grape 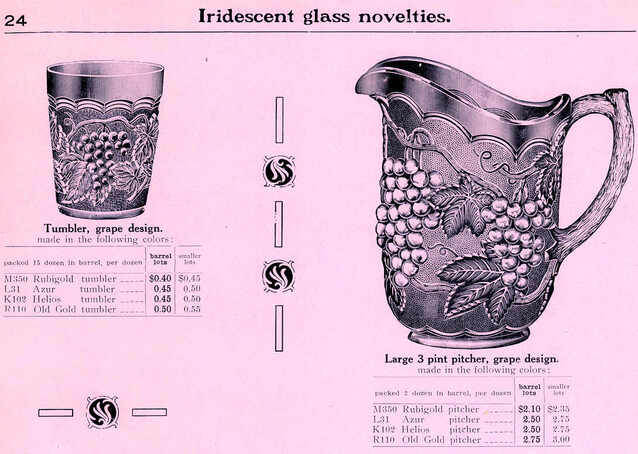 Above: Imperial catalogue extract from 1912 showing Imperial Grape tumbler and pitcher. Courtesy Jon D Bartell.
Imperial’s popular “Imperial Grape” pattern was made in a wide range of Classic Carnival shapes and colours, from around 1912.
​Marigold, purple, helios and amber were the main Carnival colours produced.
The original toothpick holders were not made in Carnival, and when the reproductions first appeared, it fooled a lot of people ... and it still does to some extent. As recently as 2019, an amethyst one (like the one shown above, albeit called "lavender"), was sold as a shot glass in a specialist Carnival Glass tumbler auction. In fact, you can easily find them for a few dollars on popular online sales sites.
If you have missed any of the previous issues of NetworK and NetworK Specials, they are all here: Back Issues.
​Privacy and the use of your information: we only use your name and email address to send you your FREE Carnival Glass NetworK ezine. We will not share your name or email address with anyone else, or use it for any other purpose. You can change your mind about receiving your NetworK ezine at any time by clicking the unsubscribe link at the foot of every issue, or by emailing us at s.g.thistlewood@btinternet.com
​Join us on Facebook
​
​We would love you to come and join in the fun, and we invite you and your friends to join us all on NetworK's fast growing and very active Facebook Group!
Copyright © 2023 by G&S Thistlewood and the individual authors and contributors where named. Protected under all applicable international laws and all rights are reserved. No image, text, or any part thereof may be copied, shared or transmitted to others without permission from the Copyright holders. Information herein may not be posted or made available, in whole or in part, on any website, social media site, FTP site, electronic bulletin board, newsgroup, or their equivalent.