Heard it through the Grapevine (*)

No - it's not an optical illusion!

The “decanter” in the 1912 Butler Brothers ad above is what we know as a Northwood’s Grape and Cable cologne bottle, and alongside it on the right is the perfect re-creation, including Northwood's "Holiday" pattern tray, courtesy of (the late) Michael O'Brien.

In the Butler Brothers ad, the cologne bottle is described as a “blown decanter … grape cluster and leaf embossed” surrounded by six Grape and Cable shot glasses and marketed as a “Whiskey Set”. It’s very clever marketing, a brilliant multi-purpose promotion (as long as you didn’t get them mixed up and swallow a mouthful of Chanel Number 5 or dab Wild Turkey behind your ears). And it wasn’t just aimed at the US market because Grape and Cable cologne bottles have actually been found with matching sets of the shot glasses in the UK too.
​Meanwhile, in Canada

In August 1910, The Winnipeg Tribune ran the following promotion:

"Another Lot of Beautiful Iridescent Glassware. Many who read this will have everyday reminders of the previous offering in the shape of the beautiful pieces they have secured. Others were disappointed owing to the quantities in some pieces being insufficient to go around. For Monday’s selling we have another assortment – even more attractive than the first – and values will be such as to throng the third floor with an eager buying crowd."

The iridescent glassware on special offer was Northwood’s Grape and Cable, in full water sets, table sets and 7-piece berry sets. The prices for the MONDAY SPECIAL were (sit down before you read it):

Below right is one of the sets you might have been lucky enough to buy - the Grape and Cable table set (covered sugar, covered butter, creamer and spooner) - this one is in purple, courtesy of Seeck Auctions.

Warning: Northwood's Grape and Cable was one of their most popular lines, being made in an amazing array of shapes and colours, so unsurprisingly, the pattern was reproduced in contemporary Carnival Glass. However, it was also faked, and unwary collectors have been taken in by fake Grape and Cable items - pie crust edge bowls, covered butters and hatpin holders.

Fakes are found in most antiques and collectibles, and the best answer is to identify the fakes and educate collectors about them - we have a (growing) section here on our website about Carnival Glass Fakes.
In Memory of Rose Presznick

In 1984, Fenton produced this distinctive oil lamp for the grandchildren of Rose Presznick, the Carnival Glass pioneer.
​
Tumbler Time! 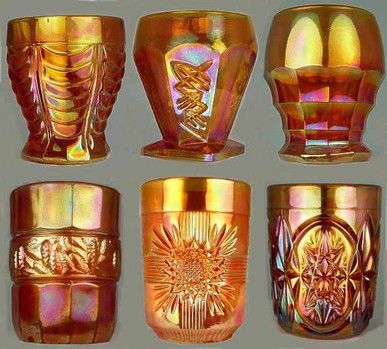 We hope you have enjoyed this issue of our NetworK ezine. We aim to bring the next one out very soon. If you missed earlier issues, they are on our NetworK back issues page. Meanwhile, we would love to hear from you, and maybe you would like to "chat" with us on our Carnival Glass facebook pages.
​Read more issues of NetworK
Copyright © 2023 by G&S Thistlewood and the individual authors and contributors where named. Protected under all applicable international laws and all rights are reserved. No image, text, or any part thereof may be copied, shared or transmitted to others without permission from the Copyright holders. Information herein may not be posted or made available, in whole or in part, on any website, social media site, FTP site, electronic bulletin board, newsgroup, or their equivalent.