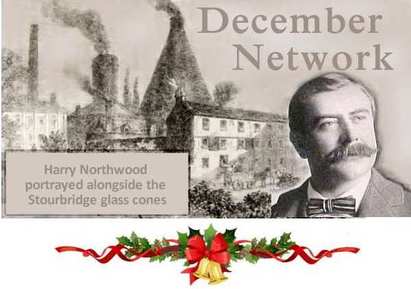 Welcome! A very warm welcome to the many new people from all around the world who have joined us recently. We hope that you will enjoy this issue of Carnival Glass NetworK.

The previous issues are on our website ... and NetworK's Facebook Group is proving to be an extremely popular, friendly and "fun" place, where Carnival is discussed, identified, puzzled over or simply shared and appreciated! The links are at the bottom of this issue.

​Harry Northwood and the Town Pump - An Inspirational Transition

The Town Pump is an iconic piece of Carnival that encapsulates the genius that was Harry Northwood. Born in 1860 as the eldest son of renowned British glassmaker John Northwood I, Harry was surrounded by creative flair and glass artistry from the get-go. Apprenticed at the age of fourteen in Stevens & Williams famous Stourbridge glassworks, Harry also attended Art School whilst honing his skills first-hand from his father.

​It was an exciting time in the world of glass - new ideas and techniques facilitated breathtaking brilliance and creativity – and Harry drank it all in as he developed his own talents and skills. But he surely also felt the need to express himself as an individual – a desire which necessitated a move away from his father’s shadow. In 1881, aged twenty-one, Harry Northwood sailed for the USA to make his own name in the glass industry.
​
Harry, like his father before him, was also a pioneer of new techniques. One very effective skill was his ability to re-create beautiful art glass forms in press-moulded glass, making them available to the many instead of just the few. The Nautilus, Tornado Vase, and Leaf & Beads rose bowl are all Northwood press-moulded and mass-produced pieces that were inspired by other original shapes - distinctive forms in which the shape itself is the pattern.

​​But the most iconic of all of Harry’s “inspired” pieces is the fabulous Town Pump. Read on …

The Tantalising Tale of the Town Pump

When Harry was 20 years old and working in the English glass industry, a show-stopping glass Town Pump was produced by Richardson’s, one of the renowned Stourbridge glass firms in the area where Harry worked. The date was 1880 - just one year before Harry was to leave England to start up in the USA.

​Roll the clock on 12 years, to 1894, and look what Harry Northwood made! Inspired by Richardson's original, Harry made his own version in blown “art glass”.
Five years later, Harry Northwood translated his blown glass form into a pressed glass version that could be mass produced, so as to be available for the many instead of the privileged few who could afford the more expensive art glass. Accompanied by a matching trough, these items were made in opalescent glass not Carnival, and were the precursors to his ivy covered Pump.
It was thirteen years later, in 1912, the quintessential Town Pump was born in Carnival Glass. Covered in ivy leaves and with a handle and spout that clearly reflect the Richardson original, this iconic piece is known in amethyst, green and marigold.

To add to the story of the Town Pump, a miniature (4 inch) version was created as a club souvenir for the International Carnival Glass Association, and made in various Carnival colours.

* Note that the opalescent (not Carnival) Pump and Trough have been subsequently reproduced by (for example) L G Wright.

From art glass to pressed glass. From the grand homes of the privileged few to the humble homes of many - an inspired transition. You can read and see more about Northwood's iconic Town Pump in our series, “The Story Behind The Glass".

​In 1907 Sowerby introduced a new pattern to their range. Known as suite number 2295, it was dubbed Diamond Pinwheel (for obvious reasons) by Carnival collectors when marigold versions appeared. So far, only marigold examples have surfaced in the butter dish shape (cake stands are also reported). But there’s a twist to this tale: a vase made by Jeannette in the USA in the late 1950s often gets mistakenly identified as Sowerby’s Diamond Pinwheel. If you “Google” Sowerby Diamond Pinwheel virtually every “hit” you’ll get is actually Jeannette’s 1950s vase or dish.

Here’s the definitive quick and easy guide for you to spot the difference and correctly identify these items.
In Issue #18, we announced that Carnival Glass NetworK has its very own Public Group on Facebook and the response has been truly wonderful! Collectors all around the world have shared some amazing pictures of their treasured Carnival Glass. Stories, comments, and friendly repartee make it a fun place to "meet and greet" all your Carnival Glass friends.

We invite you and your friends to join NetworK's Facebook Group: Carnival Glass NetworK
​Read more issues of NetworK
Copyright © 2023 by G&S Thistlewood and the individual authors and contributors where named. Protected under all applicable international laws and all rights are reserved. No image, text, or any part thereof may be copied, shared or transmitted to others without permission from the Copyright holders. Information herein may not be posted or made available, in whole or in part, on any website, social media site, FTP site, electronic bulletin board, newsgroup, or their equivalent.