Indiana Glass ads in the Press

From the “Pittsburgh Press” in 1971, here’s a Woolworth's ad featuring a selection of Indiana’s blue Carnival Harvest pieces.

Note the reference to the glass having the "glow of original carnival glass". At this time - the early 1970s - both Fenton and Imperial were actively promoting the re-introduction of Carnival Glass into their Contemporary production lines. Clearly Indiana was also tapping into this nostalgic appeal. 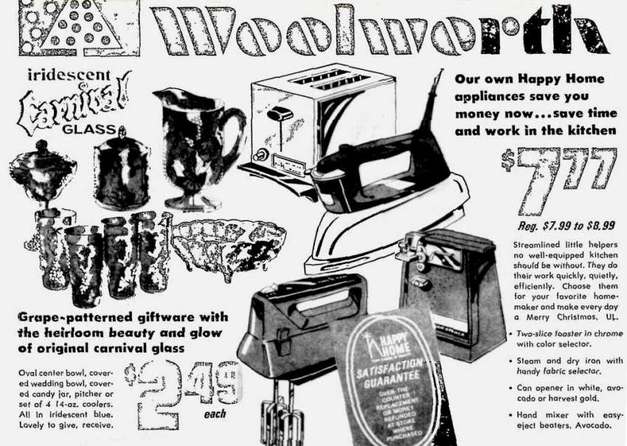 From the “Palm Beach Post” in 1971, these Indiana items were sold gift-boxed. Two Harvest shapes are shown – the pitcher and the candle holders, alongside other Indiana patterns.
From "The Ottawa Journal", Canada, November 1973 is this ad offering an Indiana Princess punch set (part of the Harvest line) for Can $7.77. The picture, below right, shows how the set was presented with its original box.
From the “Bangor Daily News”, Maine, in 1974, this ad offered blue or gold Carnival. The Harvest piece illustrated is the Wedding Bowl and Cover. The other pieces are an Oval Center Bowl, a 5 inch wedding bowl, aka Kings Crown (top right), and below it, a lidded Princess Candy Box. Below right is how the Wedding Bowl and Cover arrived in the original box.
The “Rome Daily Sentinel” (NY) in 1975 offered this ad for the Jupiter Discount Store. A range of Indiana’s Carnival in blue or gold – all gift-boxed. The Oval Center Bowl is shown in the ad., bottom left, and one of the covered canisters, bottom right. Also in the ad are the Garland bowl, the small 5" Wedding Bowl (aka Kings Crown) and the Covered Hen.
This ad in the “Utica Daily Press” from 1975 offers a selection that is identical to the Jupiter Discount Store ad. above.

An interesting nod to the 1970s is the Brut “splash on” lotion that was also on offer. 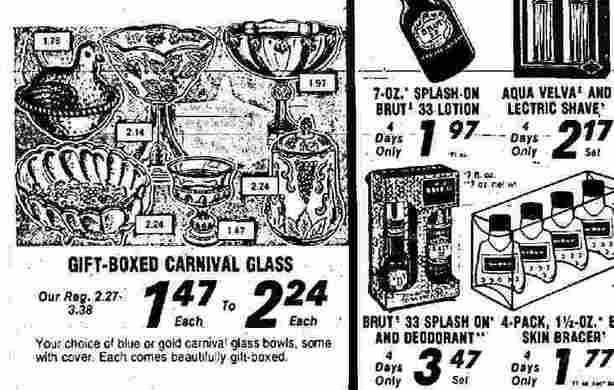 Lastly, in May 1977 the “Argus Press” offered a Mother’s Day reminder and a selection of “Fine Quality Indiana Glass” alongside an ad for “Wipe Clean Antique Vinyl” curtains! Two interesting items were on offer - the Oval Center Bowl, and at the top of the ad, one of the more unusual Harvest pieces, the Filigree Edge Candy Box. It is however unclear if the items included Carnival Glass, as only milk glass and coloured glass are referred to directly. 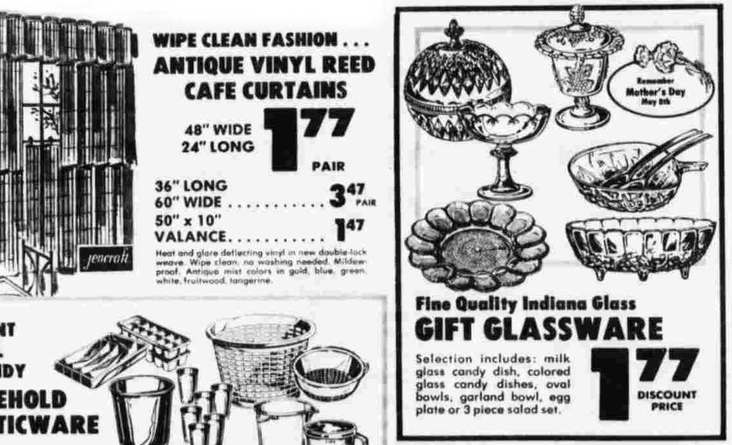 ​We have lots more information about Indiana Revival Carnival patterns and colours here on our website, including several some fascinating – and unusual catalogue images. They are all linked from the foot of our Indiana Glass Homepage - click on the image below. 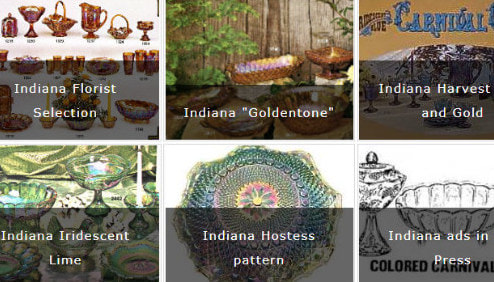