The Curious Case of the Persian Medallion Hair Receiver
​ 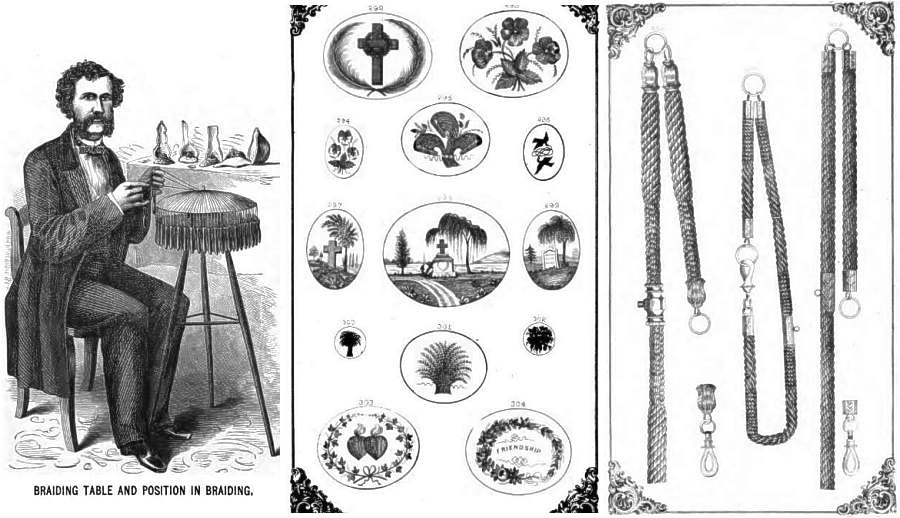 Above, left: the “braider” at work c.1867! It looks like a very tricky and complex task.
Centre: astonishingly, all these exquisitely detailed items were made from human hair.
Right: this seems to be the style of braiding used on the Hinton Ampner Remembrance bracelet.
What about Hair Receivers?

Having discovered this huge international market in hair that continued into the early 1900s, we wondered if there was a connection with hair receivers.
Naturally, our thoughts moved on to the well known Carnival Glass Persian Medallion hair receiver. We started to investigate and that’s when everything began to turn upside down!

Fenton's Persian Medallion.
Left to right: blue rose bowl with a round top opening; marigold, square top, hair receiver; a rarely seen white, square top, hair receiver.
Pictures courtesy Seeck Auctions
​The item that Carnival Glass collectors refer to as the Persian Medallion hair receiver is characterised by having a square top opening – while the same item but with a round top opening is known as a rose bowl. The square top items (“hair receivers”) are mainly known in blue and marigold, with white examples being very scarce. The round top item (“rose bowls”) are known in a wider range: found in amethyst (only eight auction sales in 22 years), blue, green (three sales, probably all whimsies from the small plate), marigold, and white. Sincere thanks to Joan Doty for her information on colour availability, from Dave Doty’s auction price database.
​Conclusion

​Based on the accepted, typical shape of most hair receivers (lidded and with a small, round opening), the square top Persian Medallion item does not conform. In fact if you think about it, the bits of hair stuffed inside an open (square top) Persian Medallion piece would get messy rather quickly, as the wide opening would allow dust, powders and so on, onto the hair. And of course, early catalogue evidence from Butler Brothers and also from Fenton themselves shows the item was actually intended to be a rose bowl.
​​With sincere thanks to Joan Doty for her information on colour availability, from Dave Doty’s auction price database.
Copyright © 2023 by G&S Thistlewood and the individual authors and contributors where named. Protected under all applicable international laws and all rights are reserved. No image, text, or any part thereof may be copied, shared or transmitted to others without permission from the Copyright holders. Information herein may not be posted or made available, in whole or in part, on any website, social media site, FTP site, electronic bulletin board, newsgroup, or their equivalent.