​
Imagine how overjoyed Bob must have been. For two entire days he had believed that he didn’t win the Big Butterfly. And typical of his generous spirit, he had been happy for Jackie (who he believed had actually been the high bidder). And then came the confirmation that he had indeed, secured the Big Butterfly tumbler.

Let’s leave the last word to Bob and his delightful sense of humour. Here’s how he described the arrival of the tumblers … they arrived “last Tuesday in perfect condition … in a 3 by 3 foot carton with enough bubble wrap and styrofoam to protect a piano”.

It's a great story!
The iconic Big Butterfly tumbler is of course a rare tumbler, with just two colours being reported. There are several examples currently known in olive green and in marigold only two examples are currently known.
​
The tumbler stands approx. 3.75 inches high, and has a base diameter of 2.5 inches. Four butterflies are spaced evenly round the tumbler, against a stippled background. A twenty-four point star is on the base. A single example of the marigold pitcher is also known.
Bob Smith says that this is his most favourite tumbler, and for quite some time, Bob’s marigold one was the first reported. ​​​Below, we present a selection of fascinating catalogue extracts for further study, which feature the Big Butterfly water pitcher (the tumbler is not shown). 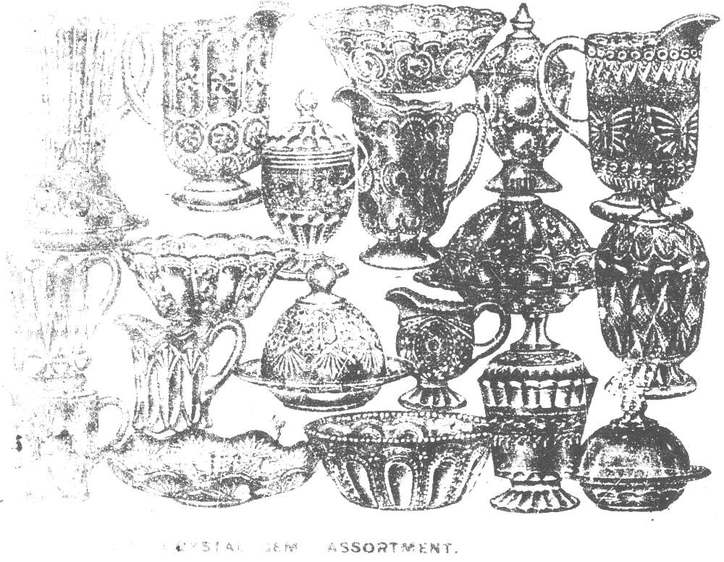 Above: an undated image featuring a “Crystal Gem Assortment” which was clearly a grouping of U.S.Glass items.
Although the quality of the old ad is poor, the Big Butterfly pitcher is clearly shown top right.
​Other known U.S.Glass patterns can be seen in the image, including pieces in both Wisconsin and Tennessee patterns.
​Visit the Classic USA Tumbler Room
Copyright © 2023 by G&S Thistlewood and the individual authors and contributors where named. Protected under all applicable international laws and all rights are reserved. No image, text, or any part thereof may be copied, shared or transmitted to others without permission from the Copyright holders. Information herein may not be posted or made available, in whole or in part, on any website, social media site, FTP site, electronic bulletin board, newsgroup, or their equivalent.