As portrayed in the Australian Press, 1920s - 1930s.
​
​All versions of Lily and Gum Tips vases were also made in a variety of non-iridised colours, such as vaseline (citron) and pink (rosalin). 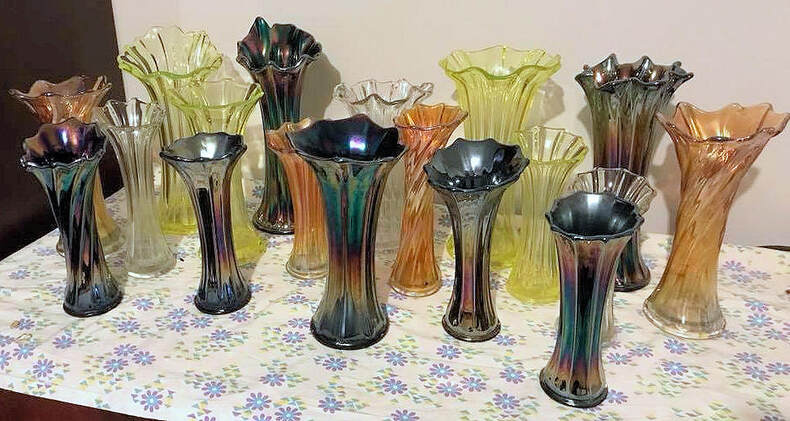 ​ A wonderful array of Lily and Gum Tips vases in marigold, “dark”, clear and citron (vaseline).
​Photo courtesy of Giuseppe Dragone.
The different representations of the vases in these ads is fascinating – with different commercial artists chosing to depict them in their own styles. The portrayals of the vases with flowers in them are especially delightful. One of the first stores to offer Crown Crystal’s Carnival Glass vases, in Australia, was Woolworths, as the ad below shows.
​
​A note on the currency.

All the prices shown in the ads are in Australian currency, which at the time was the Australian pound, divided into shillings and pence. So, for example, " 3/11 " was three shillings and eleven pence, or stated simply as “three and eleven”. There were 20 shillings to a pound and 12 pence to a shilling. At the time, the Australian pound was aligned with the gold standard and the British pound/shillings/pence.
​Moving onto 1926 - 1927, we have not - so far - found ads for iridescent Lily or Gum Tips vases. Also, noticeably, the ads that we have found from 1926 onwards, only show vases with vertical, non-twisted ribs. It was in 1926 that Crown Glass Works and Crystal Glass merged as Crown Crystal, so maybe the change was part of a rationalisation of the overall product range at that time?
​This 1927 Woolworths ad (below, left) is a delight, as it also shows the Gum Tips blooms that the vase was intended for. Coveniently, a customer was able to buy "Dyed Gum-tips", being the latest "rage for home decoration."

​Confusingly, although the vase is described as Gum Tips and the caption says it was “Made in Australia for Australian Gum Tips” the vase itself looks more like the Lily vase in its proportions and in the number of panels or flutes. The higher price also suggests that. Again, this emphasises the likelihood of these vases being perceived as generic rather than specific. The vase was not iridescent.
And finally, into 1928 and the early 1930s we have found several ads for (non-iridescent) Gum Tips / Lily vases.
Further Reading

Rundle Street Cash and Carry ad in the Adelaide Advertiser, December 1925: De Lustre glass vases.
Copyright © 2023 by G&S Thistlewood and the individual authors and contributors where named. Protected under all applicable international laws and all rights are reserved. No image, text, or any part thereof may be copied, shared or transmitted to others without permission from the Copyright holders. Information herein may not be posted or made available, in whole or in part, on any website, social media site, FTP site, electronic bulletin board, newsgroup, or their equivalent.